Teams will be playing a shortened 60-game season with many health and safety protocols in place. 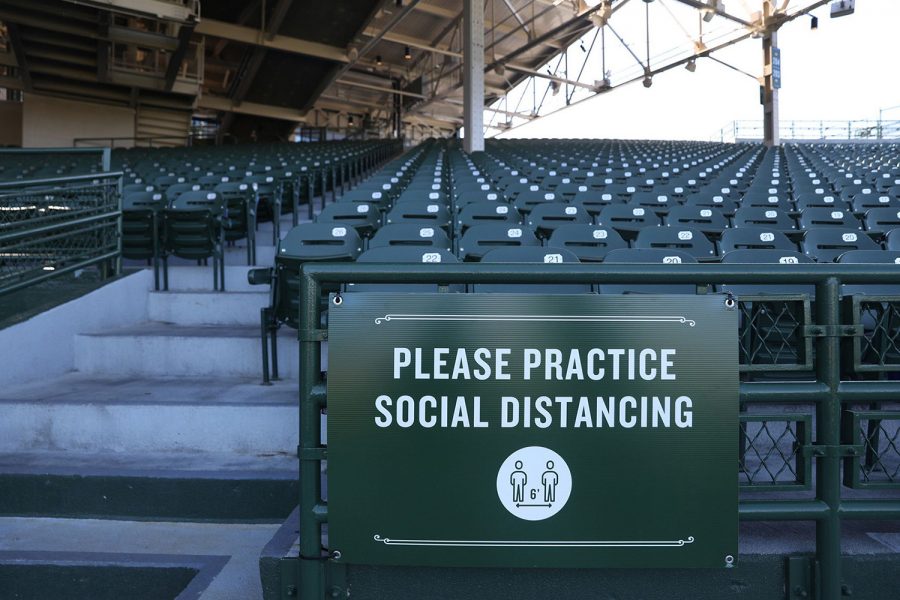 A sign reminding photographers to social distance is seen in the stands at Wrigley Field in Chicago, Ill. (Chris Sweda/Chicago Tribune/TNS)

Major League Baseball is finally back.

The season opens Thursday night, with the Yankees playing the Nationals at Nationals Park and the Giants playing the Dodgers at Dodger Stadium. All other clubs are opening on Friday.

But the season reopening doesn’t come without a multitude of changes.

The MLB 2020 operations manual is more than 100 pages, outlining how to play during the pandemic.

All lockers for players must be at least six feet apart — meaning that some players will have to abandon the clubhouse and have their lockers elsewhere in the stadium. Players aren’t allowed to arrive at the stadium more than five hours before the game and must leave within 90 minutes after.

During games, not everyone will be allowed to sit in the dugout. To comply with social distancing rules, some players will need to sit in the stands behind the dugouts — not that there are any fans to take up the seats anyway.

Any spitting by players is not allowed. Players can’t have sunflower seeds, but they can have gum if they don’t spit it out. Pitchers are not allowed to lick their fingers, although they can have a wet rag in their pocket.

Celebrations are also strictly prohibited, even if someone hits a walk-off home run or finishes off a no-hitter.

The MLB has an extensive testing and contact tracing regimen in place for all teams. Players go through testing every other day with hopeful quick turnarounds. If a player does test positive, all other players, coaches, and staff members who were in close contact with the player will be immediately isolated and tested.

However, only being on the field with a player who tested positive does not necessarily mean “close contact.” The guidelines that the MLB and Center for Disease Control have set out consider close contact to be if the player coughed or spit toward a teammate, touched them or shared items, or have been within six feet of them for at least 15 minutes.

Overall, the MLB has had good luck with COVID-19 testing. Out of over 21,000 tests taken since the beginning of Summer Camp, only 93, or 0.4 percent of tests, have come back positive.

Despite the low number of positive cases, some high-profile players have contracted the virus.

Freddie Freeman of the Atlanta Braves tested positive in early July, and at one point was actually worried for his life. Freeman told reporters that after his fever hit 104.5 degrees, he prayed, “Please don’t take me.”

Free agent Yasiel Puig also tested positive, which prevented him from passing his physical and being signed to the Braves.

The shortened season will be a learning curve for players and fans alike. In a 60-game season, every single game counts, and players have higher pressure to consistently perform well. While a 10-game slump by a player is normal in a traditional 162-game season, it could be devastating to the team in the 60-game season.

The Toronto Blue Jays, the only Canadian team in the league, are still figuring out where they will play home games this season. According to ESPN, the Canadian federal government denied the Blue Jays’ request to play games at Rogers Centre, their home stadium.

The Blue Jays have been considering multiple stadiums in the United States to use, including the stadium of their Triple-A affiliate team in Buffalo, New York. The Blue Jays start their season on the road against the Tampa Bay Rays, with their home opener against the Nationals on July 29.