Both players said the environment in the weight room and the locker room is more comfortable. 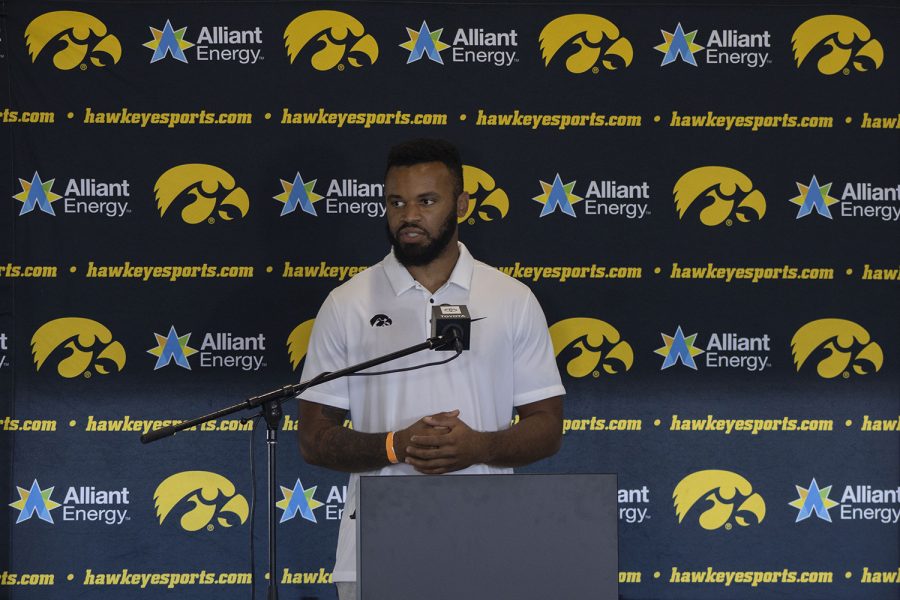 Iowa linebacker Djimon Colbert speaks at a press conference on Thursday, July 16, 2020 at the Pacha Family Club Room in Kinnick Stadium. Colbert answered questions regarding the current environment within the team and the growing communication between the players.

Djimon Colbert marched in the streets of Iowa City earlier this summer to fight for racial equality. Brandon Smith witnessed his home state of Mississippi remove a confederate symbol from its flag.

Both players, Black starters on the Iowa football team, have witnessed change inside and outside of the Hawkeye locker room this summer.

“Being a Black athlete here, you kind of don’t get to face these issues first-hand because you’re more focused on school and your sport,” Colbert said. “Being able to get out there and fighting for what my ancestors and people before me were fighting for, I felt it was kind of my responsibility.”

The Iowa football program was met with allegations of racial disparities and mistreatment by dozens of Black former players in early June. At the same time, the nation witnessed ongoing Black Lives Matter demonstrations.

Colbert, a redshirt junior linebacker, was part of a crowd that was tear gassed by Iowa City Police and Iowa State Patrol officers during a demonstration in Iowa City on June 3. The Shawnee Mission, Kansas, native said having the chance to push for change has been “super liberating.”

“It was some crazy times,” Colbert said. “It’s kind of a reflection of the world today. It shows there are these issues we’re fighting, and we’re not fighting them for no reason. The only way to go is to make progress.”

Smith, a Lake Cormorant, Mississippi, native is friends with Mississippi State running back Kylin Hill, who used his platform to push for the change of the state flag.

Last month, Hill tweeted that he would not represent the state unless the confederate emblem on the state flag was changed. Days later, the state legislature agreed to remove the symbol.

“It really surprised me,” Smith said. “I definitely think that was a great thing [for Hill], just to use your platform, your power, to have a voice and promote change to something that’s honestly been backwards for years.”

Colbert and Smith both said during a press conference July 16 that they are also seeing changes inside the Iowa football program.

Iowa head coach Kirk Ferentz admitted after the allegations came out that he had a “blind spot” in not seeing the problems in the program and the mistreatment of Black players. Former strength and conditioning coach Chris Doyle, who was mentioned specifically by several former players in their allegations, is no longer with the program after reaching a separation agreement.

“We have already seen change in the weight room and locker room,” Colbert said. “Guys being able to open up and not feel uncomfortable talking to guys that don’t look the same as you. It has been easy to see how it was before all this started and then now.”

A review of the program by the law firm Husch Blackwell is expected to be completed soon.