Fuentes will serve as special assistant to the president until June 30 of next year. Executive vice provost Kevin Kregel will step in as interim provost. 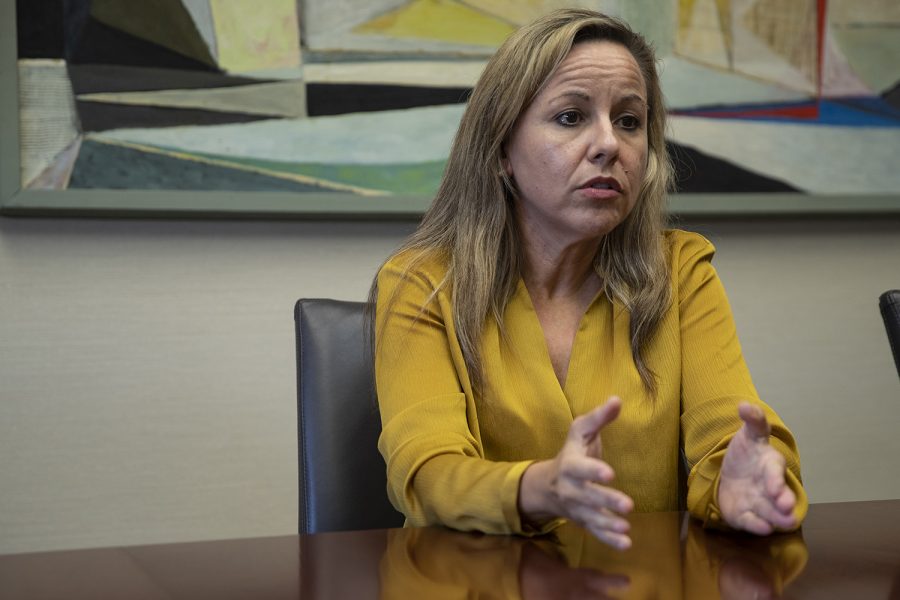 Provost Montserrat Fuentes speaks during an interview with The Daily Iowan in Jessup Hall on Monday Sept. 30, 2019. Fuentes addressed topics including diversity of campus and student enrollment.

University of Iowa executive vice president and provost Montserrat Fuentes has stepped down as provost after signing a settlement agreement with the UI, effective Thursday.

According to a release from the UI, Fuentes will serve as special assistant to the president and conduct research as part of her new role, maintaining her current salary of $439,000. Her reassignment will last until June 30, 2021, when she may assume a regular faculty position at the UI, in which her salary will be converted to a regular academic year salary, according to the agreement.

“The chance to serve our students and scholars in this new way is an exciting new direction,” Fuentes said in the release. “Being able to make an impact on our campus community by using my research and administrative skills is the best of both worlds.”

Fuentes began as provost in June of 2019. Upon her appointment, Harreld noted her commitment to UI’s goals in diversity, equity, and inclusion and her support for first-generation students as a first-gen student herself.

Executive vice provost and senior associate provost for faculty Kevin Kregel will step in as interim provost. Kregel’s appointment by President Bruce Harreld, pending approval from the Board of Regents, will last at least two years “to provide stability,” according to the release.

“Kevin has served in multiple leadership positions across our campus for the past two decades, which will prove very valuable for Iowa going forward,” Harreld said in the release. “I’m confident he will provide a steady guiding hand during what is arguably one of the most turbulent times in the history of our university.”