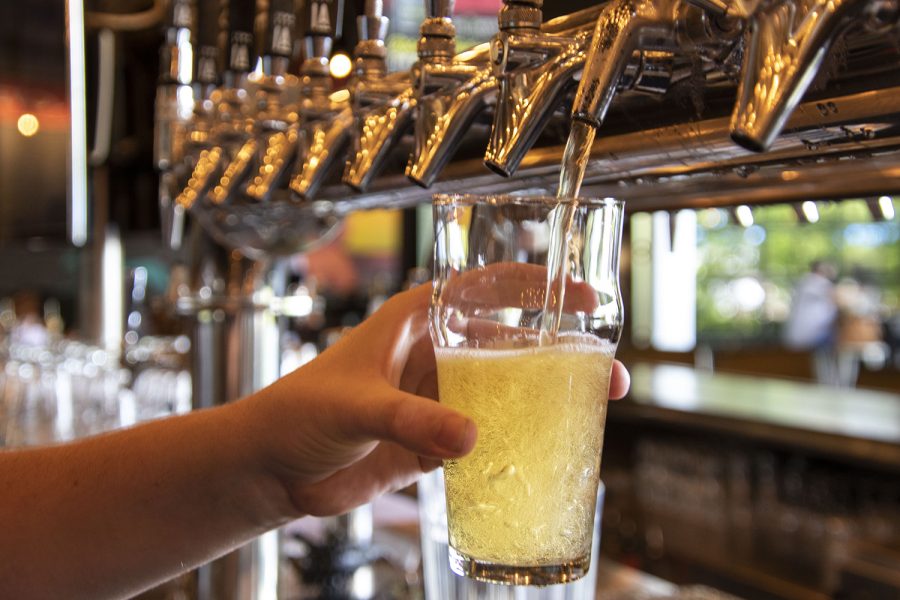 Local public health experts are examining the role that alcohol consumption may play in contracting and transmitting the coronavirus as the volume of positive cases continues to climb in Johnson County and around Iowa.

Paul Gilbert, assistant professor in the University of Iowa College of Public Health, said being drunk could definitely impact one’s ability to comply with social-distancing guidelines.

“Alcohol has all sorts of effects on the body, pretty quickly and pretty directly, and one of the effects is on the brain in that it starts to change the brain chemistry and how your brain works, and even from the first sip these changes begin,” said Gilbert, whose primary research follows drinking patterns in the population at large.

Gilbert said it’s hard to determine the threshold for when drinking begins to impair one’s decision making for most infrequent or moderate drinkers, but alcohol changes the brain chemistry, especially around the prefrontal cortex — the part of your brain that essentially checks impulses and raises caution.

“That becomes impaired the more and more alcohol is in your system, so absolutely people could start disregarding the precautions, whether it’s wearing masks or distancing — anything else,” Gilbert said.

Consuming alcohol has always been recognized as having a disinhibiting effect on people, Gilbert said, relaxing and loosening them up.

“A lot of times at small levels that’s the effect we’re going for, it makes socializing easier, it makes you more gregarious,” Gilbert said. “But it also has that effect of interrupting the process in your brain that kind of puts a check on things that might be risky or dangerous or that you maybe shouldn’t do.”

In addition to impairing judgement, alcohol consumption has a direct impact on the immune system and tends to suppress it, Gilbert added.

“The more alcohol you drink and the more frequently you drink, the more ineffective your immune system is going to be,” he said. “So, if you are exposed to anything from the common cold to tetanus to COVID, your body is going to have a harder time fighting back against any infection because of that exposure to alcohol.”

In light of a recent uptick of cases in Johnson County, Gilbert said it’s probably a bad time to think about going into crowded indoor spaces where people won’t be wearing face coverings.

The safest course of action is to always not consume any alcohol at all, Gilbert said, or otherwise to engage in common low-risk drinking behavior.

Gabby Coleman, a senior studying marketing at the UI said she tested positive for the coronavirus on June 27.

Primarily asymptomatic besides losing her sense of taste, Coleman, a server at local bar and restaurant Saloon, said she thinks she contracted the virus either from working or from drinking at other bars with her coworkers one night.

Coleman said she “for sure,” thinks being drunk could affect people’s ability to properly socially distance and follow mitigation guidelines.

“I would be serving people margaritas, and on their third one they just take off their mask and don’t even try to keep it on or they’ll come up to the bar and talk to me, whereas before they wouldn’t even go in the restaurant.” Coleman said. “And same at the bars, I feel like when everyone’s drunk and having fun they’re just sort of — you know, your first instinct is to hug your friend — and so if you’re drunk, you’re probably going to hug your friend.”

Jarvis said it would be difficult to pinpoint exactly where transmission was occurring, but he thinks there’s a multitude of factors contributing to the spike, and that alcohol consumption and engaging in social drinking activities could be one.

“We obviously recognize that when you’re out to drink or eat, certainly you can’t do that with a face covering on and so being in an enclosed area, not wearing a mask, potentially in close quarters next to a lot of persons, that kind of environment creates a really decent area to have transmission occur,” Jarvis said.

Jarvis added that while people are socializing and enjoying company, it may be harder to remember to maintain a six-foot distance, and when loud music is playing, people are more likely to speak louder and expel more respiratory droplets.

“You’re kind of looking at a perfect mix for transmission potentially,” Jarvis said.

On July 12, Coleman ended her quarantine, she said, and is now encouraging people to stay out of the bars, or at least wear a mask.

“I feel bad because being young…I was like, ‘Oh yeah, it doesn’t affect me,’” Coleman said. “But it does–because it affects older people, our families, people who might be immunocompromised, it’s a bigger picture.”