The smaller arena will be a better fit the Hawkeye volleyball team. 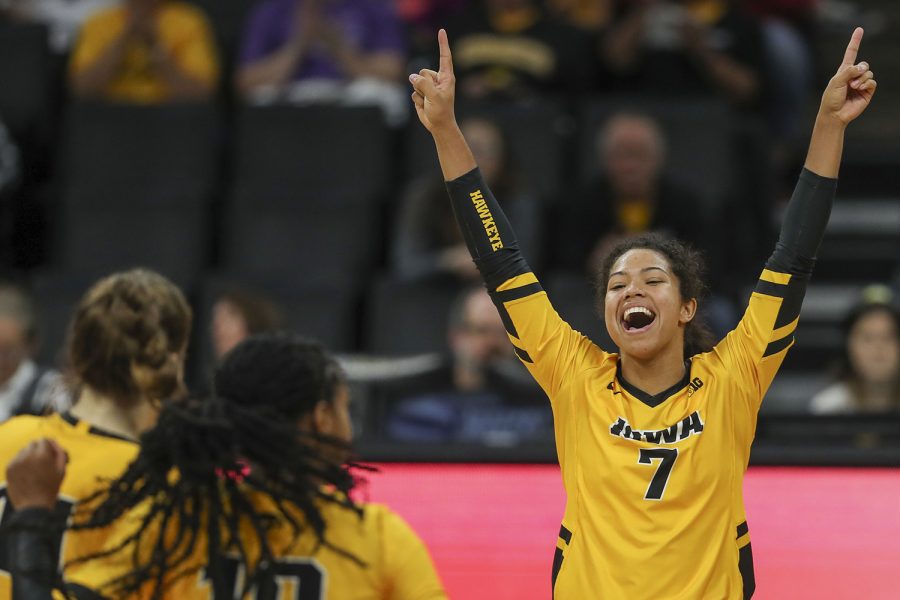 Iowa setter Brie Orr celebrates a point during the Iowa volleyball game against Indiana at Carver Hawkeye Arena on Sunday, Oct. 20, 2019. The Hawkeyes defeated the Hoosiers 3-1.

The Iowa volleyball program is getting a new arena to call home.

It was announced in January of 2019 that the volleyball team would be moving its games from Carver-Hawkeye Arena to Xtream Arena in Coralville for the 2020 season to reduce tight scheduling at Carver.

In the past, the volleyball team had to share the arena with men’s and women’s basketball and gymnastics teams, as well as the wrestling team.

Xtream Arena will be smaller than Carver, with a capacity of 5,100 compared to Carver’s 15,500. Although that capacity is needed for high attendance sports like men’s basketball and wrestling, volleyball only has an average attendance of 2,000 people.

The smaller arena will lessen the feeling of emptiness during volleyball games, and the players are excited for an arena that they can fill easier.

“[Moving to Xtream Arena] will be the perfect ending to a great four years,” senior setter Brie Orr said. “It will be awesome to have a smaller arena that we can fill up and have a more rowdy atmosphere.”

Along with being smaller than Carver-Hawkeye Arena, Xtream Arena will have seats that are closer to the volleyball court. Head coach Vicki Brown said that she is excited for a more intimate feeling between the players and the fans, especially during big kill moments.

Sophomore defensive specialist Joslyn Boyer said that she is excited to engage with the fans and thinks that the arena is going to have “really cool vibes.”

The facility as a whole will feature Xtream Arena, GreenState Family Fieldhouse, and the Coral Ridge Ice Arena. The fieldhouse will have five full length basketball courts and a turf space. Xtream arena will be a multi-purpose arena, with the ability to host much more than volleyball games. It will also host events including concerts, graduations, and other athletic tournaments.

The facility will be connected to the Iowa Fitness and Sports Performance Institute, a training and physical therapy space for athletes of all ages and sports.

The facility was a $50 million development, the beginning of a massive project at the Iowa River Landing in Coralville.

Moving to Xtream Arena will be a fresh start for the team as it tries to bounce back from a down 2019 season. Iowa volleyball went 10-21 in the 2019 season and 4-16 in the Big Ten, missing the NCAA Tournament. After the Big Ten’s announcement Thursday that it would only be competing in conference game for 2020 fall sports, the team’s schedule is facing changes.

When the Hawkeyes do get to debut in the arena, it will be a turning point for the program.

“The new arena is a great way to motivate the team and raise morale moving forward into a new space,” Brown said.