The Big Ten Medal of Honor is awarded to one male and one female student-athlete from each of the 14 member institutions for excellence on and off the field. 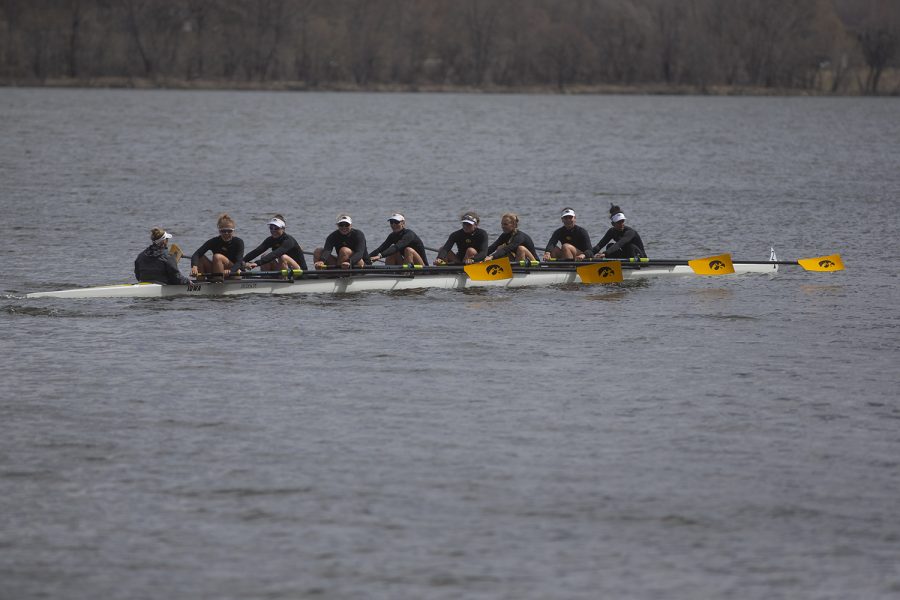 The Iowa varsity 8 crew looks to their supporters on the shore as they row back to the dock at the end of the first session of a women's rowing meet on Lake MacBride on Saturday April 13, 2019. Iowa won 3 out of 12 races with the varsity 8 crew winning both races for the day.

The Big Ten Medal of Honor is one of the oldest and most prestigious awards given to athletes in the conference. Out of the more than 9,800 student-athletes that compete for the conference’s 14 member institutions, only 28 earn this honor each year.

On April 28, the female student-athlete selected from the University of Iowa as part of the 106th Big Ten Medal of Honor class was senior rower Hannah Greenlee.

In her four seasons of rowing for Iowa, Greenlee has a very decorated career with a second-team All-Big Ten honor and an honorable mention All-American honor to her name. Greenlee helped lead Iowa to a fourth-place finish in the 2018 Big Ten Championships, and a 13th place outing in the 2019 NCAA Championships.

For her hard work in the classroom, the senior from Ames, Iowa, has made the Academic All-Big Ten team three times and was recently named a Big Ten Distinguished Scholar.

“On our team, we have a saying, ‘Be extraordinary,’ and I guess to us it means that you have the opportunity to show up every day to work towards being the best version of yourself you can be,” Greenlee said. “That is kind of the mindset that the team and I try to approach every day, every practice, and every class with.”

Nate Stanley, the three-year starting quarterback for the Hawkeyes and seventh-round pick by the Minnesota Vikings in the 2020 NFL Draft, was the male student-athlete from Iowa to receive the Big Ten Medal of Honor.

While she had not been in contact with Stanley, Greenlee said that she was honored to be grouped with athletes like him and others who are now taking the steps toward beginning their professional sports careers.

The Big Ten Medal of Honor is an award that recognizes an athlete’s achievements both on the field and off of it. Upon its creation in 1915, it was the first award in intercollegiate athletics to demonstrate support for the educational emphasis placed on athletics.

Greenlee said that time management was the key to making sure her athletics did not interfere with her academic performance and vice versa.

“I think it is all about time management, which is again a huge learning curve when you get to college,” Greenlee said. “Thankfully, there are a lot of resources available to help you with that, and I think it is about mindset too, because you kind of get to choose, ‘Am I going to approach every day and be the best that I can be.’”

With the cancellation of spring sports due to the COVID-19 pandemic, Greenlee could not perform for the Hawkeyes this past season.

However, she said that with this likely being her final season of competitive rowing, she is even more determined to help the team go far in the upcoming year.

“I am trying to look at it as a bonus opportunity to take advantage of the things I did not get to do this year,” Greenlee said. “It is really exciting to have that opportunity and look forward to that, and I think it just makes me hungrier.”