The University of Iowa Center for Advancement is hosting a webinar from their series, “Chat on the Old Cap,” with alum and multimedia artist Jason Snell, where he will talk about his career and explain his new technology and software that allows music to be generated by thought. 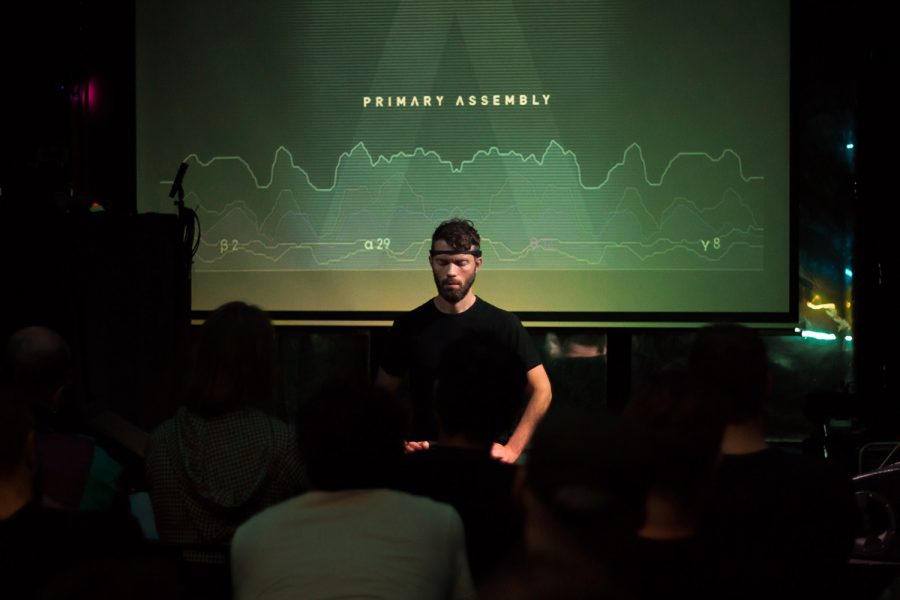 Multimedia Artist Jason Snell gives a presentation after a performance at CSPS, in February 2020.

The ability to create music with the brain sounds like a concept straight out of a science fiction movie. But for Jason Snell, a multimedia artist and graduate from the University of Iowa, this type of technology is reality. The artist will appear as part of the University of Iowa Center for Advancement’s “Chat from the Old Cap” on July 8 at 3 p.m.

The artist made his first prototype of the EEG headband, which uses brain activity to compose music, just over two years ago.  During the event, Snell plans to go into detail on how his technology works and how he came up with it in the first place. The virtual event will be conducted through Zoom via a link that can be found on the Events category on the Center for Advancement’s website.

The device uses sensors on the forehead that picks up electrical activity in the brain and translates it through Bluetooth, Snell said. Using pre-existing hardware as a base, Snell made his own software that receives the brainwave data and runs it through his own algorithms; the end result is music composition. Some of the genres of music Snell composes includes techno, horror, hardcore, industrial, and ambient.

Snell majored in graphic design at the UI in 1998, then went on to live in New York City for eight years. There, he composed music for an independent web-based interactive film, called Forest Grove.

While creating the music for the film, Snell decided to rely more on what was already available to him, such as his guitars.

“I thought, ‘you know, I’ve got a bunch of guitars, or I have a guitar and a bunch of effects pedals,’” he said. “And I know the vibe of the film, because I’ve been working on the project for several months. And I thought, ‘I’ll give it a shot, you know, just try to make some songs that would fit,’ and that worked really well.”

The COVID-19 pandemic has had a severe impact on the music industry, especially for DJs who rely on in-person events. Snell was touring in Winnipeg when the virus struck and the rest of his music and lecture tour was canceled, along with a technology festival he was already halfway through.

Snell plans to spend the large amount of time he now has doing research and development on the systems he’s created. He is also looking for ways to improve and enhance the software and technology. One of the goals is to make his software remote-accessible.

“So, if you had the EEG headband at your house, you could put it on and have the electricity from your brain,” he said. “That data goes through your browser to my studio, and you control the synthesizers in my studio.”

While performing at a festival in Athens — in a performance that did not employ the EEG — the artist was caught off guard by how invested the audience was in the musical performance itself. He said he was humbled by the experience and the realization that the audience can focus more on the music versus who is composing it.

“Just having the rapt attention of the entire audience, and you know, everyone’s dancing, everyone’s really, really focused on it,” he said. “And then when I’m done and the next person moves on, I’m just like a nobody in the crowd.”