Almost 50 years after it was originally proposed, a new name for Iowa's football stadium has surfaced again. 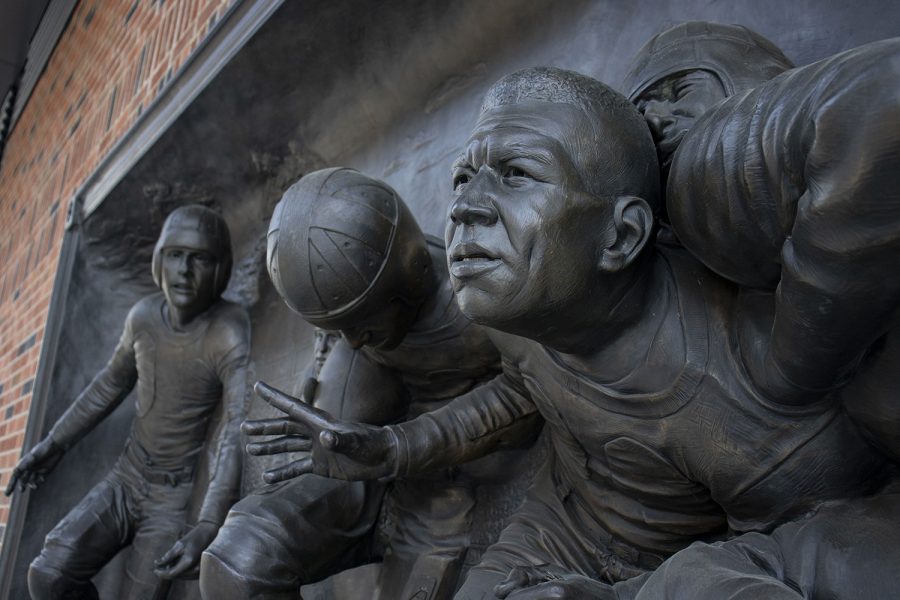 A statue of former Iowa lineman Duke Slater is seen outside the north end zone of Kinnick Stadium on Sunday, July 5, 2020.

An ongoing review of the Iowa football program has led to a tumultuous summer for the Hawkeyes.

Former players have spoken out with allegations of racism and bullying within the program, leading to a separation agreement with former strength and conditioning coach Chris Doyle and the University of Iowa.

Behind the scenes of these events — executed in a way as not to distract from the current issues of the program but to make a positive difference in the community — a proposal has emerged that may resonate with Hawkeyes.

Through the sound of protesters demanding change is a simple call. The proposal: Change the football stadium’s name to Kinnick-Slater Stadium.

The 1972 plan
This isn’t a new idea. In 1972, Cedar Rapids Gazette columnist Gus Schrader successfully resurrected a decades-old idea to name the Hawkeyes’ football venue Kinnick Stadium. At the time, it was simply Iowa Stadium.

Then-UI President Sandy Boyd recognized that Nile Kinnick, the Heisman Trophy winner and fallen soldier, was worthy of naming recognition. But he thought someone else was too: Duke Slater, a trail-blazing Black Hawkeye football player who attended Iowa from 1918-21. He went on to play professionally and was named a member of the 2020 Pro Football Hall of Fame Class in January.

According to Neal Rozendaal’s 2012 book Duke Slater, the offensive tackle was a native of Clinton, Iowa, and the son of a Christian minister who originally forbade him from playing football.

But Slater still joined his high school team before his sophomore year. When his disapproving father found out, the resilient son went on a hunger strike. Eventually, his father allowed Slater to join the team as long as he was careful to avoid injury.

His family could only afford to buy either shoes or a helmet, and Slater decided that shoes were more important, and he played most of his high school and college career without a helmet.

Slater started at the UI in 1918 under head coach Howard Jones. At the time, Slater was only the third Black player in program history. Black UI students were not permitted to stay in the dormitories during his time at the school.

The challenges Slater faced as one of the first Black players in the Hawkeye program did not deter him from making an impact. He was a three-time first team All-Big Ten player and led the Hawkeyes to a Big Ten Championship in 1921.

In 1951, Slater was the only Black player inducted into the inaugural class of the College Football Hall of Fame.

In an interview with The Daily Iowan, Boyd said his father admired Slater, saying the elder Boyd was happy that his son took a job at the UI Law School because of the star player.

When the Kinnick Stadium idea gained traction in 1972, Boyd said he recommended the Kinnick-Slater name to the Campus Planning Committee. He said the committee rejected it because it claimed to disapprove of a hyphenation.

In Rozendaal’s book, he mentions that Schrader wrote that Boyd’s proposal was “an almost unbelievable suggestion.” The columnist saw it as an attempt to appeal to a certain part of the fan base by including a Black person’s name on the home of Hawkeye football.

Today, Rozendaal and others say there’s little to honor Slater and his accomplishments in the student-housing building.

The 2020 proposal
Cole Grolmus saw his city react to the killing of George Floyd firsthand.

A Minneapolis resident and 2007 UI graduate, Grolmus decided to educate himself about the history of Black UI athletes and learned about Slater. Through researching the football legend, Rozendaal’s book appeared on Google Books.

The history from the 1972 attempt at the Kinnick-Slater name was one of the few parts available.

On the morning of June 5, Grolmus said he had the idea to write a Twitter thread with passages from the book. He attempted to make contact with Rozendaal, but before the author had a chance to respond, everything broke loose.

Former Hawkeyes offensive lineman James Daniels tweeted how Black players have been treated unfairly in the football program and that there are racial disparities within the program. Numerous other players responded with their own stories.

There are too many racial disparities in the Iowa football program. Black players have been treated unfairly for far too long.

“It was at minimum indirectly inspiring to me,” Grolmus said. “I certainly have not experienced what they experienced and have nothing to add to what they were saying about their particular message but I do think in general them speaking up set a really good example.”

The next day, Doyle was placed on leave and protesters spray-painted Kinnick Stadium. On June 7, former players came to clean up, and Grolmus posted his Twitter thread.

Kinnick Stadium is one of our greatest treasures. It is also one of the greatest tragedies in our journey towards racial equality and social justice.

Kinnick Stadium was supposed to be named Kinnick-Slater Stadium.

There were 150,000 views on the thread in three days, even catching the attention of ESPN employees. Former Hawkeye players from various sports, such as Daniels, shared it as well. Some commented on their retweet.

Wow. Never knew any of this https://t.co/PU296jAADg

Soon after the thread gained traction, Grolmus wrote a column in the Gazette regarding the Kinnick-Slater proposal and why to support it. On the Facebook posting of the column, there were many people not in support of the idea.

“The editorial staff at the Gazette wrote the headline [“It’s time to rename Kinnick Stadium”] in a way that was meant to get attention and I think it was effective,” Grolmus said. “However, I think a lot of people who weren’t reading past the headline were confused that I was suggesting to completely rename the stadium or remove Kinnick’s name from it, and that’s certainly not the case at all.

Rozendaal was hesitant to speak out publicly about this passage in his book because as a white person, he wanted Black players’ voices to take precedence. But a few weeks later after the developments at the football program, he spoke out.

“I believe and I continue to believe that Duke Slater is deserving of every honor that you can bestow upon a guy because he [had] such a wonderful personal and professional career,” Rozendaal said.

A sculpture of Slater throwing a crucial block in the most critical game of the 1921 season — a 10-7 triumph over Notre Dame that sealed an undefeated 7-0 record for Iowa — can be seen outside of the north end zone of Kinnick Stadium. The sculpture was completed in 2019 and introduced viewers to the lineman’s legacy.

Iowa Senior Associate Athletic Director Matt Henderson said the sculpture is about teaching visitors about “the story behind the image.”

“That led a lot of people to be exposed to Slater’s story,” Henderson said. “His entire story, not just his career growing up and at Iowa, but the things he did after he left the University and it’s a remarkable story that a lot of people may not have known about.”

The Process
The politics of getting a building name changed at the UI is complicated.

Though Grolmus said that money doesn’t need to be raised for this type of proposal to get through the process, it’s difficult to navigate.

Grolmus, who as a student was the president of a student organization in the Tippie College of Business and worked with the Campus Policy Center, learned a lot about how the UI worked.

He’s getting coaching on how the process works from faculty at the UI.

There has been one prominent sports figure who supported the Kinnick-Slater Stadium name. Terry Hersom, retired sports editor at the Sioux City Journal and a friend of Gus Schrader when he was alive, gave an endorsement of the idea in that same paper.

According to Grolmus, the Presidential Committee on Athletics — which is the board that oversees the athletics department — would need to approve a recommendation on the name.

The Campus Planning Committee, which has input on the logistics of buildings at the UI, would need to approve a recommendation as well. Then it would go to the Board of Regents, which would vote on the name recommendation.

As depicted in his Twitter thread, Grolmus’ challenge is to get the stadium name changed before the season, which starts in less than 60 days.

“It’s a slow-moving place,” Grolmus said. “Sometimes for good and bad reasons. Realistically, it took Gus Schrader in the neighborhood of 30 years to get the Kinnick Stadium name changed, so it may be unreasonable to expect that we can accomplish it much faster than that. I think we’ve got to go through the process.

“I think it would be great to get a dialogue at least with the Presidential Committee on Athletics and kind of see where that goes and if it ends up becoming a recommendation to the Board of Regents, then that would be great. But I’m aware of the fact that there’s a timeline behind that and there’s many other issues that need to be addressed.”

The future potential
It might seem clear what Grolmus wants from his Twitter thread. Yes, he wants Slater’s name incorporated into the stadium. But the implications of renaming the stadium would go beyond that.

“I think it’s really powerful that so many people have been able to learn from this situation and that we’ve maybe been able to use the pretext of naming the football stadium to enable a broader dialogue across the fan base and the university in the state about how we feel about social justice and racial equality,” Grolmus said.

If Kinnick Stadium were to be renamed, it wouldn’t be the first college football venue in the state to honor a Black player with its title. Jack Trice Stadium, home of the Iowa State Cyclones, was renamed in 1997 after the first Black athlete in the school’s history.

Trice died after sustaining severe injuries during a 1923 game against the University of Minnesota. Many who were there, including several of his teammates, later said Minnesota targeted Trice and it was likely intentional and racist. Iowa State and Minnesota did not play each other again for 66 years.

To this day, Jack Trice Stadium is the only FBS arena named after a Black player.

“That could have been us,” Grolmus said of the Kinnick decision in 1972. “Now, we’ve lost that chance, but I still think it would be cool to be a state where two of the three major institutions, the state institutions, have a Black person’s name on the stadium, that would still be great.”

For now, Grolmus said he will keep pushing until a committee at the UI takes on the Kinnick-Slater Stadium proposal.

“Never waste a good crisis, right?” he said. “You hate to see things like this happen, but when they do it’s a good time to get things done.”