Rummage in the Ramp aims to reduce landfill waste virtually

In years past the event has provided a space to donate and purchase used items, reducing landfill waste and raising money for local volunteer groups. 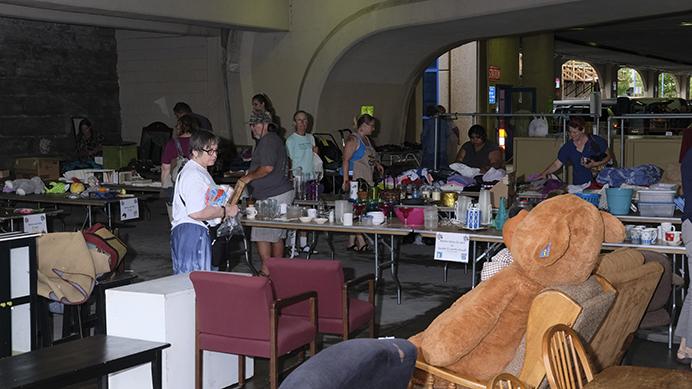 Shoppers sort through used kitchenware, clothing, and furniture during Rummage in the Ramp in the Chauncey Swan parking ramp on Wednesday, July 26, 2017. Rummage in the Ramp is put on annually by the city in order to reduce the mass of belongings abandoned on curbs and to raise money for a variety of nonprofit organizations. (Nick Rohlman/The Daily Iowan)

Iowa City’s Rummage in the Ramp in-person event was canceled this summer, along with most other annual traditions in the city, due to concern about community spread of the coronavirus.

The city-sponsored event began in 2007 with the goal of reducing reusable items going into the landfill over the summer when leases turn over. People moving out of apartments can donate unwanted furniture, clothing, and appliances for members of the community to purchase.

The 2019 rummage set a new record when more than 800 residents donated reusable items and kept more than 32 tons of materials from curbs and dumpsters, according to the event’s website.

The rummage staff splits the profits from the event between volunteer groups, which Iowa City Recycling Coordinator Jane Wilch said redistributes funds to organizations doing work in the community. Wilch said she paid special attention to the opinion of rummage volunteers when considering the 2020 event. In a survey, volunteers were asked if they would be comfortable wearing personal protective equipment to mitigate COVID-19 and how they felt about holding an event of this nature amid the pandemic.

Mary Palmberg has volunteered at Rummage in the Ramp every year since its establishment.

“It just has so many pluses, for the environment, for the donor, for the recipient,” Palmberg said. “And so that’s why I like it and really stuck with it and was so excited about this year, as so many people were, but we understand.”

Palmberg said she loves being involved with the event but acknowledged that she doesn’t feel it’s right to host group gatherings under the current circumstances.

“Besides the fact that I’m 77, in the category of people that they’re especially worried about, I think that goes for anybody,” Palmberg said. “I mean, being in a group of people that you don’t know and interacting with them closely — I just didn’t see how it could work.”

Because of the response from volunteers and uncertainty about how helpful the program would be this year with Iowa City residents moving out at different times, the planning committee announced on June 9 it would cancel the in-person rummage.

“I think people will — of course — miss having a drop off right downtown that’s very convenient to donate to, or furnish an apartment at an affordable price,” Wilch said. “I think that those are probably the two things that people will miss the most, which is why we have tried to design some virtual resources and have some activities and information online to still curb the increase in waste during this time.”

The rummage webpage provides a directory of local resale and consignment stores and a list of programs to assist people getting rid of electronics, appliances and hazardous material, and curbside services and recycling locations. The organizers also linked websites that have tutorials about repairing furniture and fixing appliances.

The Rummage ReDux, which challenges people to upcycle and transform used items, is also moving online this summer. Contestants in 2017 and 2019 had to use items they found at Rummage in the Ramp, however the 2020 format is more flexible and contestants have more time to work on their submission, said Marcia Bollinger, Iowa City neighborhood outreach coordinator.

“We’re hoping this at least might provide an opportunity to spur some creativity for the reuse of items that people pick up, wherever that might be, or ones that they even have sitting around their house,” Bollinger said.