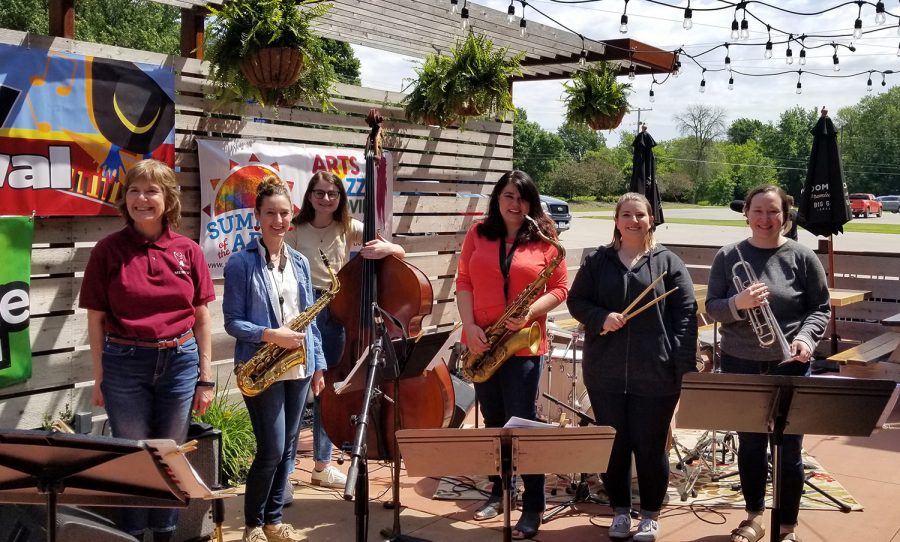 For its 29th year, the Iowa City Jazz Festival — organized by the Summer of the Arts — will be held in a virtual format because of the COVID-19 pandemic, from July 3-5. The switch to online includes some aspects of the classic version and some new inclusions.

“It’s kind of a combination of things,” said Lisa Barnes, executive director of Summer of the Arts. “We think it’s going to be a really fun way to share jazz throughout the weekend.”

In addition to local performers, this year’s virtual format allows for musicians across the nation to participate in the festival, which helped add some new artists and styles into the mix.

Barnes said some of the local musicians who play annually participated in socially distant recording for the event, all while standing six feet apart and wearing masks.

She added that the new musical additions to the line-up will add more diversity of styles to the festival, from classic to avant-garde jazz. A few of the jazz bands playing are Wave Cage, Sammy Miller and The Congregation, and the Saul Lubaroff Quartet.

“I think our committee does a really good job of trying to include different styles of jazz,” Barnes said. “There’s a good variety this year.”

Although streaming lacks the atmosphere of a festival, Barnes said that it will make the performances more accessible.

“It’s obviously going to be different than going to a festival with thousands of people, but we’ve got a lot of feedback from a lot of people who are going to stream it through their television or their stereo so they can enjoy something they couldn’t usually attend,” Barnes said.

John Kenyon, the committee chair of the Iowa City Jazz Festival, said he believes that the transition to an online format will expose more people to the music of the festival, and he hopes to see people return next year as a community.

While themes of community have always played a role in jazz, James Dreier, a professor of Jazz Studies at the University of Iowa, said that the Iowa City Community wasn’t welcoming of the jazz community for decades.

“The University of Iowa School of Music resisted jazz, not only in the curriculum, but in the building!” Dreier said in an email to The Daily Iowan. “Even by the early 1970s, students were not allowed to practice jazz at any time in any music building facility.”

Drier said this was because jazz was associated with Blackness and would threaten “Western” — which Dreier said actually meant “white” — sensibilities.

“Does this mean no white people or people of other backgrounds are involved in jazz? Of course not,” he said. “Jazz is now played and performed all over the world by every possible race, creed and culture. But to deny jazz as Black music is to deny its historical roots and remove its cultural importance.”

Recently, the Iowa Freedom Riders have called for the Iowa City Jazz Festival to officially become a festival that celebrates Black culture.

“We are aware of the Freedom Riders’ suggestions about the festival and those ideas will be part of our discussions as we begin planning for 2021 and beyond,” Kenyon said. “We are glad they care about the Jazz Festival and welcome the chance to bring more voices to the table.”

Kenyon also said the Summer of the Arts’ Souls and Blues festival explicitly celebrates the Black experience, which it says in their website’s description section.

Dreier said he hopes decisions regarding the Iowa Freedom Riders’ demands are made mindfully.

“I would hope that when making these moves or designing any statements, organizers would look to people with real knowledge of the genre to accurately reflect the history of the music, including its inclusive and collaborative nature,” he said. “It can be strong, critical, even subversive, but it remains a celebration of the human spirit and has always been open to new ideas and influences.”