On June 25, Iowa-based artists Robert Moore and Dana Harrison finished a mural on the northern side of Market House, a residential building. The images are meant to contribute to the current conversation surrounding the treatment of Black lives in America. 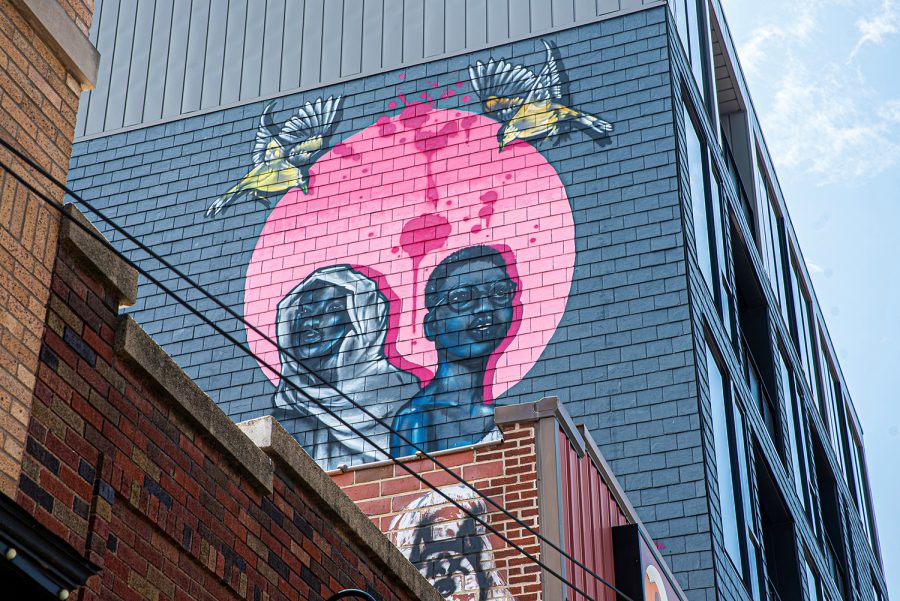 A mural painted by Robert Moore and Dana Harrison is seen atop Oasis in Iowa City on Thursday, July 2, 2020. The mural was finished within 24 hours on June 25, as a celebration of black lives and equality in Iowa City.

Within one week, self-taught Iowa-based artist Robert Moore and his partner Dana Harrison conceived, began, and completed Iowa City’s newest mural, ‘Reciprocal of Humanity.’ The project will be officially unveiled to the public on July 4.

The mural can be found at 202 N. Linn St. on Market House. Featuring the images of two Black women with goldfinches hovering above them, the painting sits about three stories up on the north side of the building. The women face the horizon with a determined gleam in their eyes.

“We bounced ideas back and forth and then came up with the final image…and I wouldn’t change anything on it,” Harrison said.

This particular mural also represents a larger theme in the artists’ work. All throughout last year, Moore turned his artistic focus to addressing the disparities that he sees toward the treatment of minorities in America. The artist said he wanted to elevate the voices of people that often go unheeded.

“There’s a lot of Black humans and community figures in Iowa City that I wanted to elevate,” Moore said.

Ross Nusser, the project developer of Market House, reached out to Moore about designing the mural after seeing the attention his ‘Harvesting Humanity’ project received. Nusser said he had wanted to do something with the north side of the building for a while. When Nusser started brainstorming ideas, the Black Lives Matter movement began to stir around the killing of George Floyd.

“The protests started happening, and we realized we had this canvas that could be used for public art… we had a canvas and the opportunity to listen to a conversation, and wanted to be able to be active listeners,” Nusser said.

Nusser reached out to Moore through a family friend, and the duo started the project on June 19 in celebration of Juneteenth — the holiday that commemorates the end of slavery in the U.S. — and completed it on June 25.

While Harrison and Moore’s timeline was harried by inclement weather, the artists still finished with time to spare, pulling it off in 24 hours.

Moore said that the northern location of the mural enabled them to convey a specific message about freedom and liberty.

“In a sense, these two women are looking out, almost leading to what I see the future to be,” he said. “You hear the term of the north star being a guide, slaves using the stars and moon as a light to guide them to freedom — there’s a lot of heavy symbolism with the intention that’s much more than just the aesthetic.”

Both artists said that so far, the feedback has been positive. Moore hopes that their work will continue the current conversation surrounding the treatment of Black Americans around the country.

“I hope it provokes thought, conversation, and change,” Moore said. “Art is powerful. Even in silence, it’s loud. I hope that people can also connect to an identity or a figure that is strong and resilient and is proud and Black.”