In a webinar on June 30, Iowa City Community School District board members talked over in-person, at home, and hybrid models for K-12 students. 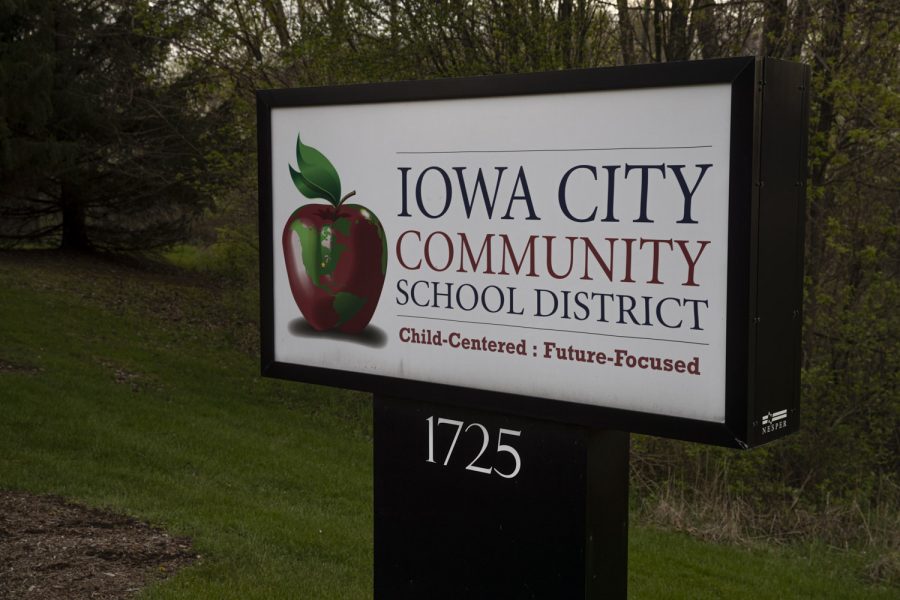 A sign for the Iowa City Community School District is seen outside the district's administration building on Tuesday, April 28.

The Iowa City Community School District Board discussed four different models it’s considering the implementation of in the upcoming school year in a virtual meeting Tuesday, including on-site, all-remote, and hybrid models of instruction.

The board will release more information about the return-to-learn plan through July week by week.

At this time, all four models are still being considered for implementation. According to Matt Degner, interim superintendent of the school district, schools will likely use a version of hybrid learning at points throughout the year.

While discussing an on-site learning model, the board stated that they tentatively project that 90 percent of students will be in school and 10 percent will elect to stay home.

“Even if everybody’s on site, or the majority of our people [are] on site, there has to be an at-home learning option for those that don’t feel comfortable,” Degner said.

This format is the most similar to instruction as it was prior to the cancellation of in-person classes due to COVID-19, though social distancing measures would be added. It allows the most students to physically attend class, Degner said, but it is also the most risky in terms of health and safety.

The second model the board considered was required continuous learning, which would take place online. Unlike option classes that students completed online in the spring 2020 semester, this virtual learning would be mandatory for all students, regardless of grade level, said Diane Schumacher, Director of Curriculum, Instruction and Assessments. The district would still offer limited services in person, estimating that 25 percent of students would be on campus and 75 percent would be at home.

“There would be some students we would work to still serve in-person on a limited basis, maybe not daily, but … a modified schedule, where we would try to do some of those in person services,” Degner said.

The board is also considering two hybrid models that combine online and in-person learning.

An A/B model allows one half of the student population to alternate attending school with another half each day.

Another hybrid proposal allows for students in pre-kindergarten through fourth grade to be on campus every day, while students in fifth through 12th grade would participate in the A/B rotation.

In this model, the youngest students would be able to access in-person instruction every day and it would relieve child care concerns for those students, Degner said. The secondary campuses are larger than elementary campuses, so having half the amount of older students in the building allows for more social distancing.

The groups would split up alphabetically so siblings at the same school could attend on the same days. Degner said students in the same family that don’t share a last name will also be kept in the same cohort of students.

By the end of the meeting, none of the models had been definitively taken off the table.

Degner and board members pointed out problems with the A/B hybrid, saying it would be difficult for families to take young students to day care every other day, and children may be exposed to more germs while there.

“I do appreciate that and getting more kids in [school] and I also know that every place [where] we’ve seen social distancing go away has had major outbreaks,” said board member J.P. Claussen. “And that’s what I’m worried about, is if we can’t educate anybody because we’ve got a bunch of people sick, including staff … and for me I’m leaning towards health and safety for now because of what we’re seeing going on — and we live in a hotspot.”

Board Member Lisa Williams voiced concern about potentially switching models during the school year, stating that she preferred pursuing a hybrid plan that would be sustainable all year.

“It’ll be easier for us to put together a child care plan for the entire year, rather than having to worry about the plan changing every three weeks or every six weeks or every eight weeks and scrambling to find different levels of care because we’re moving in and out of these models,” Williams said. “And so if we have … a greater chance of staying in one of these hybrid models, longer and more consistently, that would be — I think — a huge upside, though we should weigh [it] against the benefits of having more kids in the school longer.”