Assistant Professor James Shepherd has received a federal grant from the U.S. Department of Energy to continue providing research opportunities for his team studying a specific type of electronic structure theory. 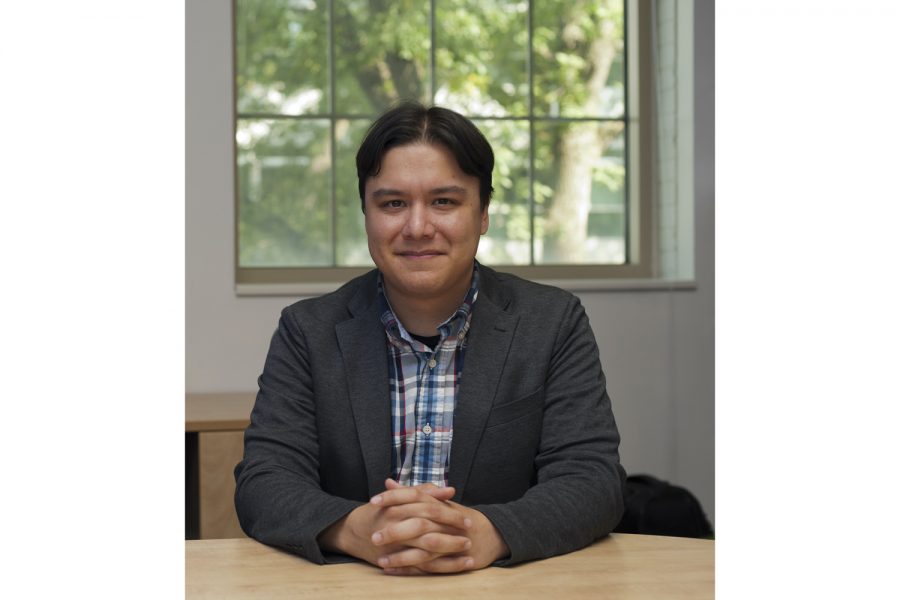 Students in the University of Iowa Department of Chemistry’s electronic structure theory research team will soon be able to use federal grant funds awarded to Assistant Professor James Shepherd to increase opportunities for receiving recognition for research achievements.

Shepherd received a five-year federal grant that allows him to give members of his specific research team higher-level assistant positions, thus giving them more time to complete their research both on and off the team.

Shepherd was one of 76 recipients of the U.S. Department of Energy’s Early Career Research Program federal grant. When he learned his research qualified for the grant, Shepherd said he felt excited that he had worked a number of years to receive funding for his research and to move forward with the opportunity.

“As an undergraduate, I really loved chemistry,” Shepherd said. “There were rich explanations for why things happen. You could always ask why, and there would be this sense of there being deeper levels.”

Members of Shepherd’s general research team consist of three undergraduates and four graduates, and two of the graduate students are funded specifically by the Department of Energy’s grant.

Shepherd said the team now has the funds to devote more time to its members and receive recognition for the project.

Shepherd’s research focuses on the field of finite temperature electronic structure theory — the development of algorithms to simulate the properties of electrons reacting in finite, or regular, temperatures that people feel around them.

These reactions are then combined with quantum mechanics — the study of the motion and interaction of subatomic particles, Shepherd said.

Petras said Shepherd deserved the grant not only because of his scientific ability, but also his desire to be a good mentor.

“While the pursuit of scientific knowledge is a high priority, Professor Shepherd balances this by making research accessible through careful training,” she said. “In working with him, I have learned what it means to contribute to science in a meaningful way. Science is done by a community of people interacting, sharing knowledge, learning, and working towards common goals.”

Petras said her experience working in Shepherd’s research group has been amazing because the team cultivated a space where members are comfortable learning with each other and speaking about science.

RELATED: UI professors mapping the way for the future of plasma physics and fusion energy research

She said chemistry has been second nature to her and that she chose to pursue an area she could contribute to and make a difference in.

“I feel like I have an obligation to society to use my talents to help us understand the world around us,” she said.

Shepherd said his students run simulations on computers to study the reactions of materials in higher temperature situations. They are in the process of developing new software that will allow these simulations to run more efficiently.

“We are in the unique position to look at [electrons] to a high degree of position,” Shepherd said. “There are a lot of different ways to do these simulations, but we think we have the best way and the way of doing it that produces the right answer.”

Shepherd said studying the interaction of electrons is limited, because systems must be small enough. The goal of his research project is to develop ways to look at small systems at high levels, he added, which will allow other labs across the nation to compare numbers with labs at the UI.

“When we think about chemical bonds and think about electricity flying through computers, the interesting properties are related to the arrangement of electrons,” Shepherd said. “You then model the interaction of electrons with physics to understand them.”

On his general research team, Shepherd said he is a physical chemist with specializations in theory and methods development. His team works to develop algorithms that can be used by experimental teams, Shepherd said.

UI junior Laura Weiler is on the general team led by Shepherd that explores the application of machine-learning algorithms to problems in electronic structure theory. Shepherd taught her that everyone has something to contribute in an academic setting, Weiler said.

“Over the next decade, I imagine much more regular integration of machine learning and quantum computing in physical sciences,” Weiler said. “I’m learning to work carefully and methodologically. These skills may seem obvious in the context of more traditional laboratory environments but are also essential to computational research.”

Shepherd said he collaborates with both chemists and physicists when conducting his research.

“There are some things that cannot be directly observed in the lab. That’s where [my team] comes in,” he said. “With simulations, you can see things that can be very difficult to measure with experiment. I am lucky to be at the interface of those conversations.”