Lugo now competes for the Hawkeye Wrestling Club after his Iowa career ended prematurely due to the COVID-19 pandemic. 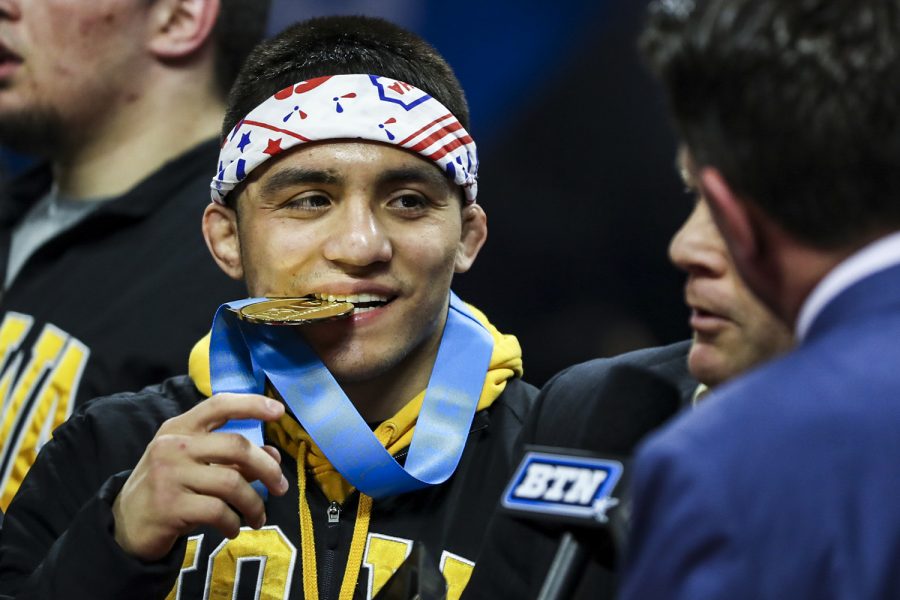 Iowa's 149-pound Pat Lugo bites his gold medal during the final session of the Big Ten Wrestling Tournament in Piscataway, NJ, on Sunday, March 8, 2020. Lugo won by decision 2-1, securing the 149-pound championship, and Iowa won the team title with 157.5 points.

After his senior season was cut short due to the COVID-19 pandemic, Pat Lugo is back on the wrestling mat, and he’s already earning accolades.

The former All-American Hawkeye and current member of the Hawkeye Wrestling Club was named the USA Wrestling Athlete of the Week on Tuesday.

At the co-main event of last weekend’s Rumble on the Rooftop in Chicago, one of the first wrestling events since March, Lugo tallied three step-outs and a second-period takedown to defeat former Ohio State All-American Luke Pletcher, 5-0.

The event marked both wrestlers’ first competition since their senior NCAA seasons were cut short due to the COVID-19 pandemic.

Each week USA Wrestling will select an Athlete of the Week based upon performance within wrestling for that week. The selection committee will consider any level of wrestling from youth programs through the senior level. Twitter fan votes also play a part in decision.

Lugo was the 2020 Big Ten Champion at 149 pounds and was the top seed at that weight class heading into the NCAA Championships. He finished his senior season with a record of 21-1.