After gaining starting experience as a freshman, Iowa guard Joe Toussaint heads into the 2020-21 season with new confidence. 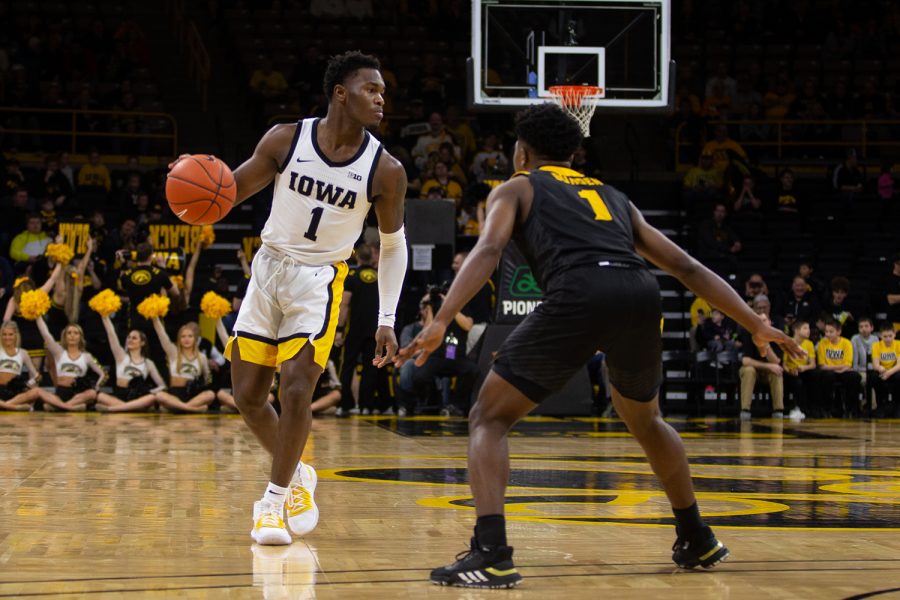 Iowa guard Joe Toussaint strategizes his next move to keep the ball away from Kennesaw State guard Terrell Burden during a basketball game against Kennesaw State University on Sunday, Dec. 29, 2019 at Carver Hawkeye Arena. The Hawkeyes defeated the Owls, 93-51.

Starting guard Jordan Bohannon opted to shut his season down Dec. 16 so that he could undergo hip surgery, and Toussaint went from getting minutes off the bench to being a starting point guard in the Big Ten.

It was a learning experience, but the move into Iowa’s starting five provided Toussaint with new confidence.

“Coming in as a freshman and stepping into a starting role, sometimes I would overthink things,” Toussaint said. “I would hesitate on whether I should shoot the ball, whether I should do this or that. But last year helped me a lot.”

Toussaint only averaged 6.5 points in his first season for the Hawkeyes. He made an impression around the league, however, that went beyond his statistics.

Former Maryland All-Big Ten guard Anthony Cowan, who was a senior last season, joined Big Ten Network analyst Andy Katz in May. Katz asked Cowan to name the toughest player he had to guard during the Big Ten season.

“People are going to be like ‘wow’, but I think it was the guard from Iowa, Joe Toussaint,” Cowan told Katz in May. “He was really good. That was a guard that because of me, Cassius [Winston] and Zavier [Simpson], didn’t get talked about. [Michigan State’s] Rocket Watts as well. Both of are young guards that I feel like are going to take over the Big Ten.”

Toussaint brought quickness to the floor for Iowa last season. His speed and change of direction allowed him to get to the hoop even against good defensive teams in the Big Ten.

He was also one of Iowa’s best perimeter defenders.

At times though, that speed got Toussaint in trouble. Iowa head coach Fran McCaffery mentioned on different occasions during the season that Toussaint needed to slow down occasionally to avoid taking bad shots and committing turnovers.

“Getting used to the tempo of the game was important for me,” Toussaint said. “It kind of slowed down for me toward the end of the season. I started to be patient. At first I tried to rush everything, but the experience definitely helped.”

After Iowa’s season ended prematurely due to the COVID-19 pandemic, Toussaint went home to the Bronx.

Due to the pandemic’s strong presence in New York, Toussaint said he stayed home for weeks, along with his three siblings and his mother — who was working from home.

Trying to get practice in on the basketball court proved to be difficult for Toussaint during his time in New York. An outdoor public court he was practicing on had the rims taken down. Eventually, Toussaint said he gained access to a gym.

While he was away from the court, Toussaint was still preparing for the upcoming season. He said he asked members of Iowa’s staff to send him the film of all of his turnovers from last season.

“I could watch what I did wrong,” Toussaint said. “I could see where I hesitated or when I should’ve shot the ball or if I threw a bad pass.”

Iowa started voluntary workouts June 15, although there are still questions surrounding the upcoming season due to the pandemic.

Amid the uncertainty, the Hawkeyes are among the national preseason favorites. Toussaint is in an interesting situation going into his sophomore year. After starting 20 games as a freshman, he may be back to the bench this season with Bohannon’s return.

Whether or not he’s in the starting lineup or coming off the bench is not a concern to Toussaint right now. And neither are the overwhelming expectations.

“We’re always going to be a hungry team,” Toussaint said. “We’re still going to play like we’re the underdogs. Everybody is going to put their heads down and grind.”