Scherff won the Outland Trophy as a senior in 2014. 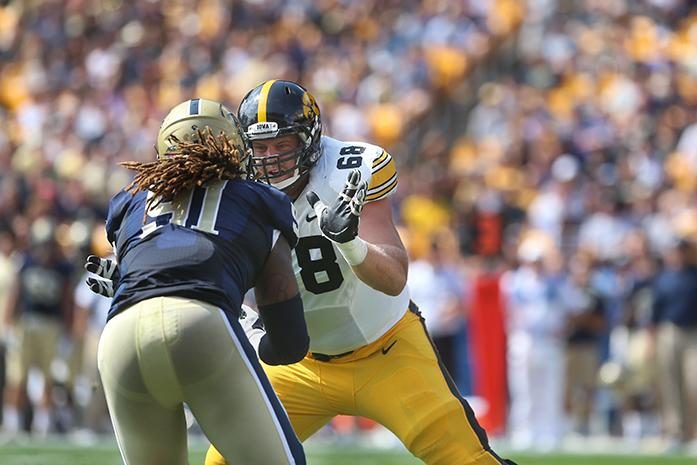 Josey Jewell now has some company from another former Hawkeye on the Big Ten Network’s All-Decade football team.

Brandon Scherff, who played at Iowa from 2010-14, was named as one of five offensive linemen on BTN’s All-Decade Team Tuesday. He is the second Iowa representative, after Jewell, to make the team so far.

🚨 Our #BTNAllDecade reveal continues with the big fellas up front 🚨

Next up? @HawkeyeFootball’s @bscherff68 was picked by our panel as one of the Top OLs of the 2010s.

Scherff came to Iowa City after a decorated career at Denison High School. He was the team’s starting quarterback as a sophomore before moving to the offensive and defensive lines in his final two seasons. As a senior, Scherff was named first-team All-State.

“Brandon Scherff was not just a big old log,” BTN host Mike Hall said after Scherff’s selection. “He was an athlete. Like quarterback for his high school team, as well as offensive and defensive line. Played high school baseball, was a state champion in track and field, and he was a really good basketball player in high school.”

As a freshman at Iowa, Scherff was named to the conference’s all-Freshman team by BTN.com after playing most of the season at left guard.

In 2012, Scherff was moved to left tackle to replace All-American Riley Reiff.

“I remember us being at camp, and one of the big questions around the Iowa offensive line was how they were going to replace Riley Reiff,” BTN host Dave Revsine said after Scherff’s selection. “Riley Reiff had been an All-American at left tackle. We’re walking around during practice and I cross paths with [BTN analyst] Howard Griffith, and I’m like, ‘What are you seeing?’ And he said you’ve got to go watch Brandon Scherff on the offensive line. Because this kid is going to be an absolute superstar.”

Scherff was forced to miss the final five games of his sophomore season after suffering an injury, but came back even better as a junior.

In 2013, Scherff started all 13 games at left tackle and quickly became one of the best players in the conference. Scherff earned the team’s Roy J. Carver Most Valuable Player Award, Offense for the 2013 season. He was also named first-team All-Big Ten by the league’s coaches.

“It’s such a critical position nowadays,” BTN analyst and former Ohio State head coach Urban Meyer said after Scherff’s selection. “You’d see him show up on film non-stop, and I would always think, ‘Who is that guy?’ He’s athletic, could do it all run and pass. I never saw him get beat… I just thought he was tremendous.”

Scherff opted to return to Iowa for his senior season rather than enter his name into the NFL Draft. This decision payed off in a big way.

As a senior, Scherff was the Outland Trophy winner, a consensus first-team All-American, and the Rimington-Pace Big Ten Offensive Lineman of the Year. He ended his Iowa career by starting his last 26 games at left tackle.

Scherff was the fifth overall pick in the 2015 NFL Draft and has since been named to three Pro Bowls as a left guard.

Scherff was selected to BTN’s All-Decade Team by a panel of 24 voters. Here is what more of them had to say about Scherff.

“Brandon was a big, strong offensive lineman with great feet,” BTN analyst and former Iowa quarterback Chuck Long said after Scherff’s selection. “What makes a really good lineman is footwork and feet, how quick they are. I just thought he was really good with his feet, had a great first step.”

“He was a man-child. He was just a hulking mass of person,” BTN host Rick Pizzo said after Scherff’s selection. “And he was really hard to move. He had underrated foot work, I think he was more athletic than people gave him credit for. And Kirk Ferentz knows a lot about offensive lineman… And I think when you speak to Kirk and you ask him about Brandon Scherff, he would certainly put Scherff among a very small group of the best offensive lineman he’s ever coached.”

“Brandon Scherff was one of my all-freaks guys in terms of super workouts,” Fox Sports reporter Bruce Feldman said after Scherff’s selection. “But also just a great all-around athlete. We obviously know Kirk Ferentz is a brilliant offensive line guy, and he’s had a ton of success for a long time at Iowa. I think Brandon Scherff really epitomizes that. He was just a dominant force for them.”

“If you put on the film, any film, and said, ‘OK, pick out the best offensive lineman,’ it would be Brandon Scherff,” BTN analyst Glen Mason said after Scherff’s selection. “He was in a league of his own.”