Despite a statewide green light to resume in-person business, many local retail stores and restaurants have decided to remain or return to a state of closure in response to increasing COVID-19 cases in Johnson County. 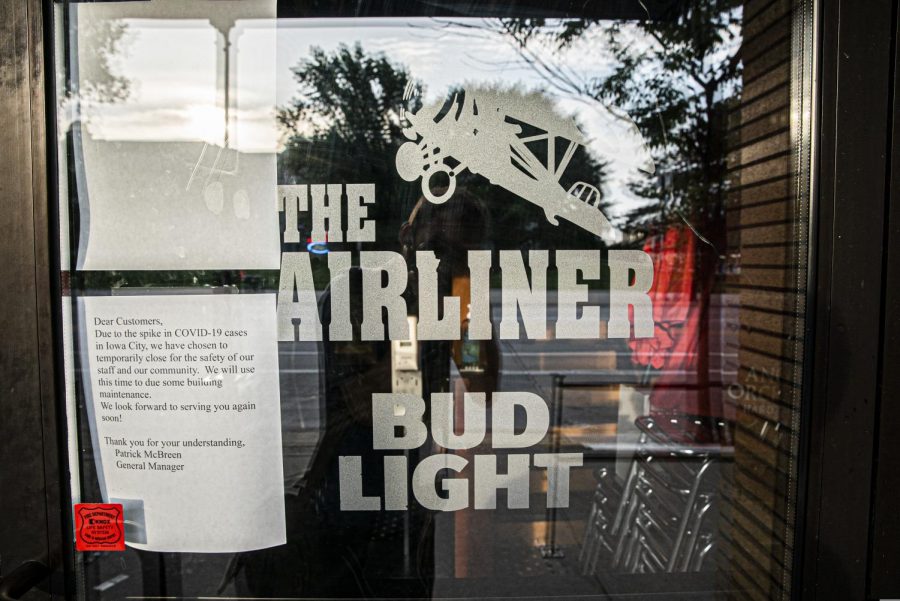 The Airliner in downtown Iowa City is seen on June 29. Local business briefly reopened after a temporary shutdown resulting from the spread of the coronavirus, but the resurgence in cases is causing another wave of shutdowns.

As the number of positive cases of the novel coronavirus in Johnson County continues to climb, Iowa City businesses that recently reopened after several months of mitigation efforts are closing their doors once again to help flatten the curve.

Coronavirus cases have recently spiked in Johnson County among young people, and Iowa Gov. Kim Reynolds and the Johnson County Board of Supervisors have both responded by extending a state of public-health disaster emergency.

As of Monday afternoon, positive cases in Johnson County totaled 1,098.

Many local restaurants, bars, and retail stores have responded by re-suspending in-person service. Downtown bars Studio 13 and Yacht Club have closed again, according to their websites. Additional businesses in the community have announced their latest closures on social media, like the popular Iowa City restaurant Airliner — which closed its doors again June 25 — among others, including Revival in the Pedestrian Mall.

“I know people really want an answer as to when we’ll be back open, but right now we’re just taking it as it goes and doing what feels right,” said Sheila Davisson, owner of Revival Iowa City. “That’s right for myself, my staff, and my customers. It’s not to judge anyone who isn’t doing that — we just feel like that’s what’s best for us.”

Revival initially closed its doors March 16, ahead of Reynolds’ mandate that businesses across the state close. When the store received the green light to reopen for in-person service, Davisson said Revival began offering private appointments where groups of two could shop, while two to three staff members were also in the store.

The store re-closed its brick-and-mortar shop on the afternoon of June 25 and moved back to an entirely online format.

Davisson said it was clear cases of COVID-19 would continue to rise in the community, and her store will continue doing businesses in its online format.

RELATED: Iowa businesses will be allowed to reopen May 15

The decision to close Revival’s doors again is “another blow” amid the pandemic, she said, but added that in-person service requires constant sanitization and increases the risk of exposure to her staff — which motivated the shop’s current closure.

“It’s already been very impactful,” Davisson said. “We’ve already all been impacted financially by this and I feel like we were just kind of starting to get our feet back under us.”

Dumpling Darling has taken similar action to protect its staff as COVID-19 cases rise. Manager Nick Shatkus said the restaurant was previously offering only takeout and has now suspended all service.

﻿The business announced on Facebook on July 25 that they would be closed until July 9 to allow the staff to self-quarantine after one member of the staff tested positive for COVID-19.

“Really we just want to make sure the staff all feels safe,” Shatkus said. “I think most of our staff wants to work. A lot of us still need income, so it’s also a matter of accommodating them.”

Reynolds said at a public event in Keota last week that she does not plan to order businesses to close again in response to the rise in cases.

“We’re not going to listen to Kim Reynolds,” Shatkus said.

Co-owner of Oasis Falafel Ofer Sivan said the restaurant has not reopened its dine-in option and has no plans to in the near future. The business is currently open three days a week for takeout orders.

Sivan said this is a scary time for a lot of businesses. There’s an ever-present financial concern for business during this pandemic, he said, but Oasis Falafel is putting it at a distant second to safety concerns.

“If the staff becomes infected or exposed, we’re going to be on the side of caution,” Sivan said. “I view it as inevitable — everybody will be shut down at some point because of concerns of possible exposures. It sucks, but it is what it is.”

Sivan believes it’s only a matter of time before the restaurant has to do its “14 days,” a term in reference to the sufficient length of time a business would need to close if an employee tested positive for the virus. Businesses may even have to do it more than once, he added.

Sivan said he recognizes that Oasis Falafel is counted lucky among businesses because it can remain open for takeout, whereas some cannot.

Davisson agreed, stating that Revival is in a fortunate position because its online store was already established when its brick-and-mortar shop closed and then closed again to mitigate the spread of the virus. The business offers free delivery and free curbside pickup as well, she added.

Business is nevertheless impacted, Davisson said, and significantly lower than it was before the COVID-19 outbreak. Without in-store traffic, she said business becomes more unpredictable.

“We’re just trying to do our best to try to make choices that feel right, that feel like we’re doing the best thing for our community,” Davisson said. “And trying to put financial concerns a little bit to the side.”

Studio 13 owner Jason Zeman said the bar stayed closed a week longer than other local bars and opened for three weeks before closing again in light of increased spread of COVID-19. Zeman said he was concerned if the business didn’t close now — a traditionally slow season — it could have to close in the fall instead, which would be more devastating financially.

With the recent uptick in COVID-19 cases we are taking the proactive measure of temporarily closing as we believe is the right thing to do and it’s up to businesses to take the lead right now. Please see the previous tweet with the msg from our CEO for more information.

All businesses are currently trying to find a weird balance of being socially responsible without disappearing forever, Zeman said. People should try to order takeout and still take advantage of local business through curbside pick-up and more as much as they feel comfortable doing, he added.

“Do those things you can do, because it’s really important right now,” Zeman said. “I know so many business owners in town who are so close to failing right now. We just have to get through this together.”