The 125-pounder has established himself as one of the top wrestlers in program history. 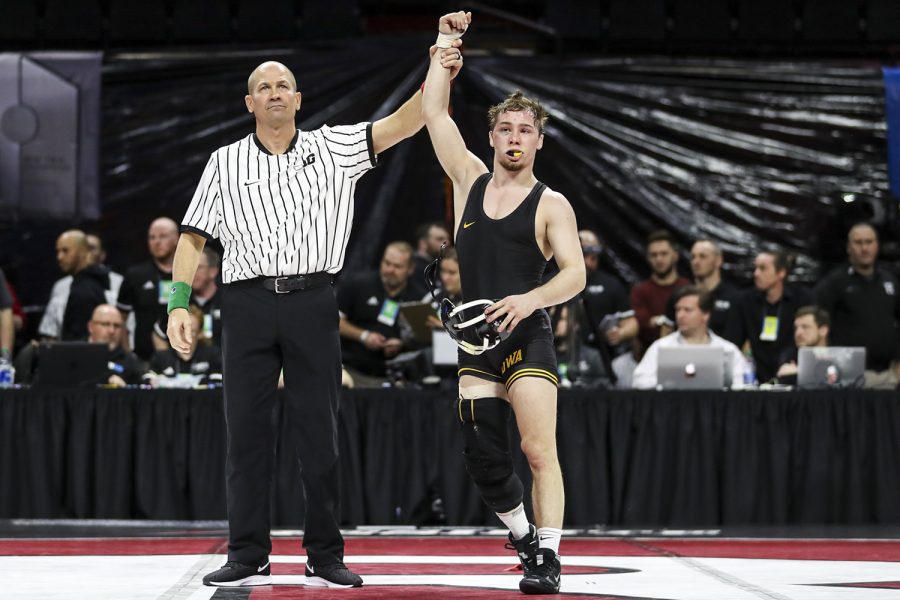 Few wrestlers can say that they had the career Iowa senior Spencer Lee has had so far.

With a 63-5 record, two NCAA National Championships, a Hodge Trophy, and numerous other accomplishments, Lee has already made a permanent mark in Hawkeye Athletics history.

It’s almost a guarantee that this type of success will continue in Lee’s senior season. But before that happens, here are some of the highlights from Lee’s career up to this point.

Every great story has an epic beginning, and the start to Lee’s college career was no exception. At the University of Northern Iowa in 2017, Lee rattled off three victories to win the tournament.

Though he wasn’t going against the best of the best, he beat wrestlers from Missouri, Wisconsin, and Minnesota, all of which were top-20 programs at the time, according to WrestleStat.

The Big Ten is a gauntlet when it comes to wrestling. It’s not easy for any wrestler to win a match in the conference, no matter their skill.

In the conference six duals that Lee participated in during 2018 season, he won all of his matches and had some impressive moments. Against Michigan State, he pinned his opponent in 46 seconds, and against Minnesota, he earned a technical fall against the No. 5 wrestler in his weight class, Ethan Lizak.

But his most impressive victory in the Big Ten Dual Season was against Nathan Tomasello, the No. 2 wrestler in his weight class. With a 3-2 win, Lee again let everyone know that he was one of the best wrestlers in the nation.

Many already know that Lee won the national championship as a freshman, but the fashion behind it is less known.

After coming off a third-place finish at the Big Ten Championships, Lee had enough momentum to make a run for it at nationals. Actually, more than enough.

He won his first two matches by technical fall, and then he defeated the No. 7 and No. 2 wrestler by pinning them. This set him up for the championship, which he won over No. 4 Nick Suriano from Rutgers, 5-1.

Lee’s winning percentage was slightly lower in his sophomore season, though he once again swept the Big Ten Dual Season. However, he finished second at the Midlands Championships, compared to his sixth-place finish a year earlier.

Lee’s junior year could best be described as dominant.

Outside of having to medically withdraw from the Midlands Championship during the tournament, everything went right for Lee this past season. While winning all his matches, he scored bonus points in 16 of them, while 14 of them didn’t make the full seven minutes.

He finally got a Big Ten Championship when he defeated No. 8 Devin Schroder of Purdue, 16-2. Unfortunately for Lee, he couldn’t win his third NCAA Championship because the event was canceled because of the COVID-19 pandemic.

At the end of the season, Lee earned the Hodge Trophy and James E. Sullivan Award, the former given to the nation’s best wrestler and the latter given to the most outstanding amateur athlete in the United States.