Jewell was a consensus first-team All-American his senior season. 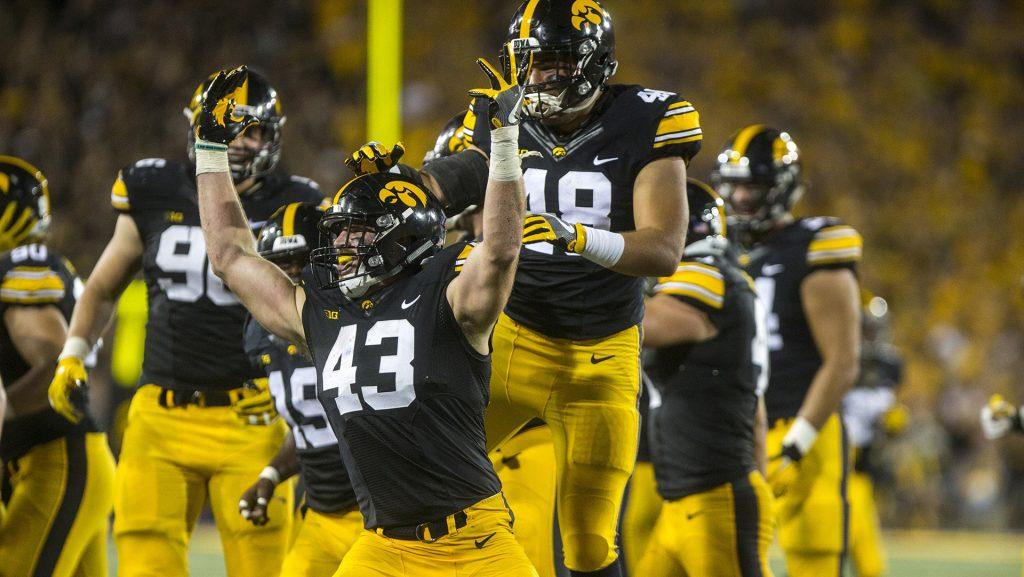 Iowa line backer Josey Jewell celebrates an interception during the game between Iowa and Penn State at Kinnick Stadium on Saturday, Sept. 23, 2017. Both teams are going into the game undefeated with records of 3-0. The Nittany Lions defeated the Hawkeyes 21-19. (Ben Smith/The Daily Iowan)

The Big Ten Network is releasing its All-Decade football team for the conference this week. It didn’t take long for the first Hawkeye to make it.

Former Iowa linebacker Josey Jewell was named to the BTN All-Decade team Monday. “The Outlaw” played for the Hawkeyes from 2014-17. He was a starter at middle linebacker in his final three seasons in the Black and Gold and finished as one of the most productive players in program history.

“When I think of Iowa football over the last decade, to be honest, he’s the first person that comes to mind.”

The voters share why @HawkeyeFootball legend @josey_jewell made the #BTNAllDecade Team.

Over his last three seasons as a Hawkeye, Jewell recorded 126, 124, and 136 tackles, respectively. His 136 tackles as a senior led the Big Ten. Jewell also finished his career with 28 tackles for loss, 10 sacks, and six interceptions.

Jewell was the first player in the Kirk Ferentz era to be named a permanent team captain as a sophomore.

A native of Decorah, Iowa, Jewell nearly went to nearby Luther College, a Division III school, before going to Iowa.

After his sophomore and junior seasons, Jewell was named second-team All-Big Ten by the league’s media and coaches. That changed his senior year.

As a senior, Jewell’s 136 tackles, 13.5 tackles for loss, 4.5 sacks, and two interceptions led him to a first-team All-Big Ten selection. He was also the recipient of the Nagurski-Woodson Big Ten Defensive Player of the Year and Butkus-Fitzgerald Big Ten Linebacker of the Year honors.

A panel of 24 voting members decided BTN’s All-Decade team. Here’s what some of them had to say following Jewell’s selection.

“I am an absolute sucker for the underdog story,” BTN host Dave Revsine said. “And there may not have been a better one in the last decade in the Big Ten than Josey Jewell. Here is a kid who grows up in rural Iowa on a turkey and cattle farm. He is about to go to a Division III school in his hometown. And then at the 11th hour, Iowa swoops in.”

“In anything you do in life, you have to produce,” BTN analyst Stanley Jackson said. “And when you think about the linebacker position, the most important thing is to tackle. You go back to just his last year — 136 tackles. The motor on this kid is special.”

“Josey Jewell has the second-most tackles in the modern era in Big Ten football,” BTN host Mike Hall said. “Here were his last three years in the Big Ten. Second in the league in tackles, then second again, then he led the league. You could not get passed Josey Jewell if he got close to you.”

“I just thought Josey was a great leader, had a great nose for the football,” BTN analyst and former Iowa quarterback Chuck Long said. “Just love those great stories where they don’t get recruited and all of a sudden he becomes a super star. He was certainly that.”

“I remember speaking with the Iowa coaching staff and they were blown away by his football IQ,” BTN host Rick Pizzo said. “He could read plays before they happened.”

“Anytime anybody on that Iowa defense is a really good player and they’re making plays like Josey Jewell, it’s because of great fundamentals,” BTN analyst Glen Mason said. “And he’s one of the greatest fundamentals linebackers that we’ve seen.”

“Intelligent and incredibly consistent,” BTN analyst James Laurinaitis said. “The production year in and year out, game in and game out takes a lot of people by notice. People who had played the game and watch it very closely know that when you’re that consistent year after year, it gets a lot of respect from everybody. When I think of Iowa football the last decade, he’s the first person that comes to mind at all positions.”