In a public statement released Monday, Wadley made allegations of mistreatment against several current and former members of Iowa's coaching staff. 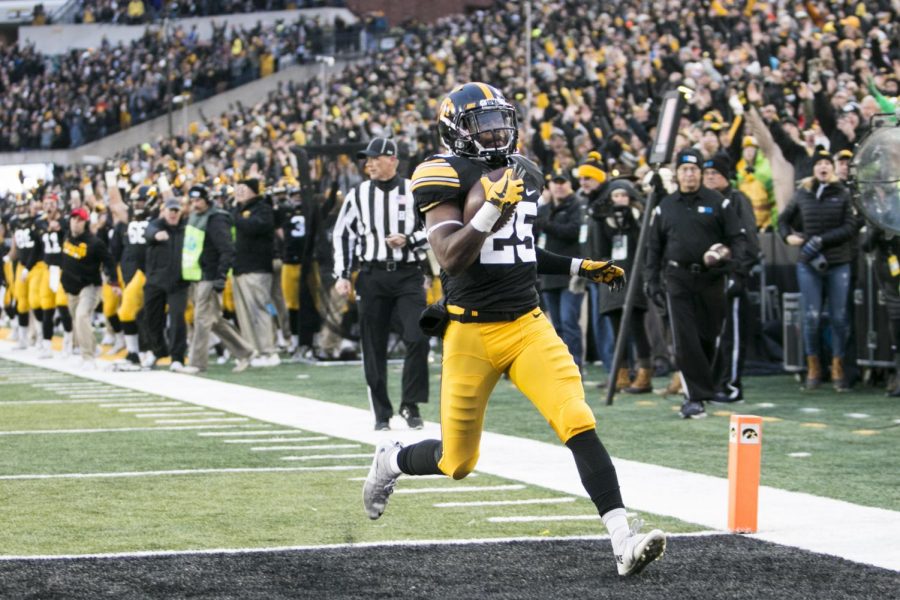 Former Iowa running back Akrum Wadley made several allegations of mistreatment against current and former members of the Iowa football coaching staff in a public statement on Monday. In the post, Wadley said that playing for the Hawkeyes was “a living nightmare.”

Green is representing Wadley and other former Hawkeyes as they speak out with claims against the Iowa football program.

Wadley complied 3,633 yards and 35 touchdowns in his tenure with the Hawkeyes, but said that playing in games was his only relief from the alleged mistreatment he experienced from members of the coaching staff.

Several Black former Iowa football players started speaking out earlier this month with claims of racial disparities and mistreatment. Doyle was mentioned specifically by several former players in these allegations and has since been removed from staff.

Iowa reached a separation agreement with Doyle June 14, which will pay him $1.1 million. As part of the agreement, Doyle admitted no guilt. Doyle was entering his 22nd year at Iowa and was the highest paid strength coach in all of college football. Iowa hired the Husch Blackwell law firm to conduct a review of the program.

Kirk Ferentz has held two press conferences since the allegations against the program started to come out. He promised to listen to current and former players about how to make the program more inclusive.

A message from UI Athletics to The Daily Iowan Monday said Kirk Ferentz will not be commenting publicly on statements like Wadley’s.

“As previously stated, Coach Ferentz will not be commenting on individual unverified accusations posted on social media out of respect for the independent review process,” UI Athletics said in a message to The Daily Iowan Monday. “Coach Ferentz has spent the past several weeks listening and talking with a number of current and former players, who shared their experiences and their desire to help shape the future of the Hawkeye football program. Additionally, Coach Ferentz has been meeting with the newly formed advisory group and is formulating a plan to institute their recommendations. Coach Ferentz believes that meaningful change takes time and a thorough independent examination is already underway. He remains committed to creating a more inclusive culture for all of his players now and in the years to come.”

In his statement, Wadley alleges that on multiple occasions Brian Ferentz, who has been on Iowa’s staff since 2012, asked him if he was going to “rob” a gas station or a liquor store when he saw Wadley wearing his team-issued wool hat that covered his face in cold weather. Wadley also claimed that on a different occasion, Brian Ferentz cursed at him and threatened him for parking in an unmarked spot at the team facility while he was grabbing a protein shake before heading to an exam.

“All I knew was I was angry, frustrated and numb all at the same time,” Wadley wrote.

Wadley also alleges that Iowa’s staff targeted him for not gaining enough weight. He said this led him to drinking shakes before every workout and becoming sick.

“I was threatened by Kirk Ferentz that my meal card would be taken away and I will not eat nor be able to sit with my teammates during eating sessions,” Wadley wrote. “He did follow through on his threat. I went to use my meal card and it was declined. I had to call my mother from New Jersey at 10 or 11 at night because I was hungry to order Domino’s Pizza for me. Or I would have to go to a fan’s house earlier at night to eat because there was no way I was going to be able to make it through the next day vomiting, being weak and be able to make it through school and practice that day.”

Wadley said that he asked Binns to find him a therapist because “no one in the football program would help us or listen to what we had to say.” After meeting with the therapist once, Wadley said that she “disappeared.”

“No one told me where she went and no one was put in place for her after that,” Wadley wrote. “I didn’t want to ask too many questions because we would get punished for anything and everything.”

A screenshot of a text-message conversation that is reportedly between Wadley and Binns was included with the statement. A message allegedly sent by Binns to Wadley said that he must perform 20 hours of community service, on orders from Brian Ferentz. In a separate message, the texter tells Wadley “I don’t know what you did.”

Binns is Iowa’s interim director of Diversity, Equity, and Inclusion for the athletic department and has been mentioned specifically by Kirk Ferentz and Athletics Director Gary Barta as being a crucial part of the program’s response to allegations of racial disparities.

Wadley said that he turned to alcohol to cope during his time at Iowa. He went undrafted in 2018 and spent a brief time with the Tennessee Titans.

“My time at Iowa has done things to me that I am not going to discuss because knowing how these people treated me and other black athletes,” Wadley wrote. “I am done giving them power over me. But if I could do it all over again. I wish I never played for the Iowa Hawkeyes. I would not encourage any future athletes or parents to send your kid to go play for the Iowa Hawkeyes under that current coaching staff.

“My experiences with people outside of the program in the Iowa community are ones that I cherish and will be with me forever grateful for. My hope is my story and those of my teammates save others from the experiences, truths and mistake of playing under and for a coaching staff at Iowa that did and said nothing to stop the bullying and racism from happening to us under Chris Doyle, Brian Ferentz and Kirk Ferentz. What you see on TV isn’t what you get behind closed doors.”