University of Iowa Student Government has been advocating for a medical amnesty bill in Iowa for years. After five administrations and two legislative sessions, the bill was signed by the governor Thursday. 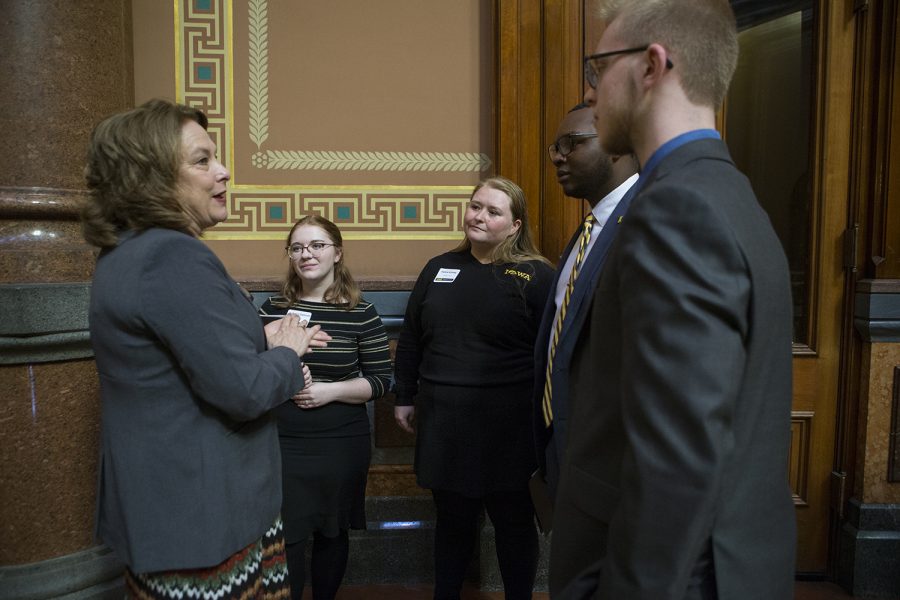 Senator Annette Sweeney speaks with UISG senators during the Hawkeye Caucus at the State Capitol in Des Moines on April 9, 2019. The Hawkeye Caucus provides members of the University of Iowa community to come speak with Iowa legislators.

The bill has been championed by USG since 2016. It was one of the measures they lobbied for during the yearly Hawkeye Caucus day, when USG members and other UI officials would go to the Capitol to speak to legislators about their concerns.

Ben Nelson, a recent UI graduate and former USG member who was involved in launching the initiative, said it started during his first year in student government. At a summer conference between student governments at Big Ten schools in 2016, then-president Rachel Zuckerman was inspired to pursue medical amnesty after learning that students at Rutgers University had been successful at passing a similar measure in New Jersey.

At the time, Iowa was one of 15 states that did not have a similar law, and one of only a few in the Midwest, Nelson said.

“It was a really exciting opportunity, and it was important to us that Iowa had similar safety laws on the books to other states,” he said. “It wasn’t a political issue, Southern states had it, red states had it, blue states had it.”

The UI has a policy that provides immunity for students who call for help in drug or alcohol-related emergencies from punishment by the university, but it does not protect from legal action.

Nelson said UI students worked with student governments from Iowa State University and the University of Northern Iowa to coordinate efforts in getting a bill passed.

RELATED: Medical amnesty bill passes in the Iowa house after five years of students fighting for it

USG President Connor Wooff said one of the roadblocks to moving the bill through the Legislature was making lawmakers aware of the problem. Some lawmakers were also concerned the bill would encourage underage drinking, Wooff said.

“At first it was just a lot of hesitancy about whether this was a real concern or an issue,” he said. “Only a few legislators in the Legislature cover a campus…but the legislators outside of it don’t necessarily hear this from their constituents, that there’s this need to get help and not get in trouble.”

The bill only applies to alcohol-related emergencies and does not provide immunity for other drugs. Other iterations of the bill have been more expansive, but Wooff said the students wanted to take the approach one step at a time.

Wooff said the bill found early champions in Sen. Brad Zaun, R-Urbandale, and Rep. Jarad Klein, R-Keota. Zaun was one of the first senators to show support for the bill, Wooff said.

Zaun could not be reached for comment, but on the Senate Floor on June 10 he thanked the student governments of the three universities for getting involved in the legislative process. He mentioned that his son who was involved in UI student government was the first person to bring the bill to his attention.

“I compliment all the students that got involved in this,” he said. “It takes a while down here, as you know, to pass legislation, mostly from an education standpoint.”

Nelson said the passage of the bill was a testament to the effectiveness of collective student activism.