Recapping negotiations between MLB, MLBPA now that 2020 season is set

Negotiations ended when a 60-game regular season was imposed. 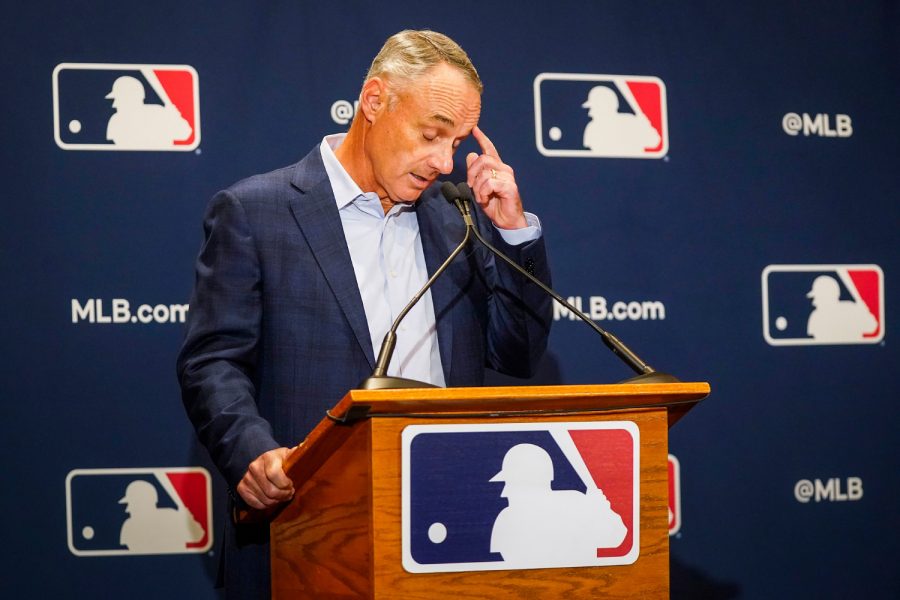 After months of negotiations, players have committed to reporting to their home stadiums by July 1 and starting a 60-game season on July 23 or 24. Uncertainty has swirled around the MLB season, with players and owners seemingly never able to come to an agreement.

The root of the problems in negotiations were over players’ salaries.

When the 2020 regular season was suspended in March, the players union signed an agreement stating that if there was a season, they would get full prorated pay, based on how many games ended up being in the season. In it, MLB commissioner Rob Manfred also reserved the right to mandate a season if the two sides could not come to an agreement later in the year.

Negotiations for starting the season again began May 11, when the owners approved a plan that would include an 82-game schedule, a universal designated hitter, and an expanded postseason with 14 teams. This proposal also included a 50/50 revenue split between players and owners, something done in many other professional sports, but unprecedented in the MLB.

The MLB never formally submitted that plan to the union. After it was leaked, the MLBPA stated that players would not go below the already agreed upon prorated salaries from the March agreement.

On May 16, the MLB health and safety proposal was leaked to The Athletic, outlining how the MLB will address travel, testing, and protection for high-risk players. In the proposal, the MLB stated that all players and staff will be tested every three days. The MLBPA responded, saying that they want testing to be more frequent.

The league released its first economic proposal to the Players Association on May 26, where it was considered ‘dead on arrival.’ Players balked at the sliding pay-scale — where the highest paid players would take the highest pay cuts. Players told ESPN that the proposal was “an attack on those who earned the right to negotiate their salaries, whether in free agency or arbitration.”

The MLBPA countered with a 114-game, full-prorated pay season on May 31. The proposal also included the right for any player to opt out of the 2020 season, with those who are considered ‘high risk’ receiving salary and service time. Those who are not ‘high-risk’ would still receive service time. The season would stretch from June 30 to Oct. 31, with the postseason taking place in November.

The league rejected that proposal, under the fear that a second wave of the COVID-19 pandemic would end the postseason early. Instead of an immediate counteroffer, the MLB stated that they could impose a shortened season if players did not agree to further salary reductions.

In response, the MLBPA posted a statement on June 4 calling the intention to impose a shortened season a “threat” and that players have “resoundingly rejected” the league’s demand for additional salary cuts.

RELATED: Iowa baseball players miss out on opportunities due to shortened MLB Draft

On June 8, the MLB released a proposal of a 76-game season, but with only 75 percent of the players’ prorated salaries. The MLBPA responded on June 9 with an 89-game season with full prorated salaries and an expanded, 16-team postseason. The MLB resoundingly rejected that proposal, although Manfred guaranteed a 2020 season, saying that he will mandate a season if the MLBPA and owners cannot come to a deal.

On June 12, the MLB offered a 72-game season with 70 percent prorated salaries, 80 percent if the postseason is completed. The MLBPA quickly rejected that offer, and players took to Twitter, inviting Manfred to impose a season, saying “tell us when and where.” The MLBPA also released a scathing statement, stating that “these efforts have fallen upon deaf ears.”

Instead of telling them when and where, the MLB offered a 60-game regular season on June 17 with an expanded,16-team postseason.

The MLBPA provided a counter proposal on June 18, with 70 games and full prorated salaries. The Association was told by the MLB that the league will ‘not play more than 60 games’ or even respond to this proposal.

The Association rejected the MLB’s final proposal on June 22, which included expanded playoffs as well as a pledge that the union would not file a grievance against the MLB.

Only hours after the union rejected the proposal, MLB owners unanimously voted to implement a 60-game 2020 season with full prorated pay, in accordance with the March agreement. A three-week spring training will begin on July 1 in the clubs’ home stadiums, with opening day projected to be July 23 or 24. As of now, the playoffs will still feature 10 teams.

Although there will be a 2020 MLB season, there are no promises heading into 2021.