Garza has until Aug. 17 to pull his name out of the NBA Draft. 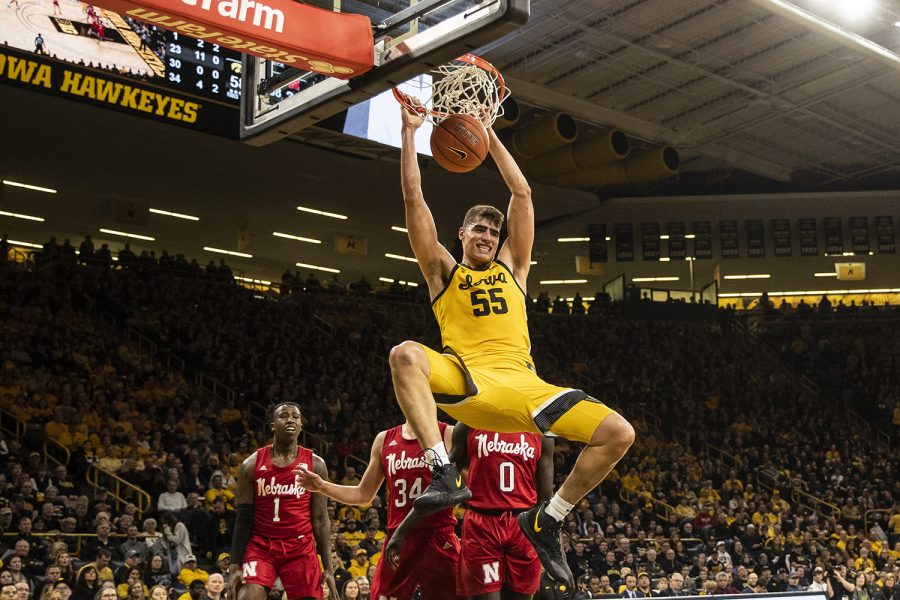 Iowa center Luka Garza dunks the ball during a men’s basketball game between the Iowa Hawkeyes and the Nebraska Huskers at Carver-Hawkeye arena on Saturday, February 8, 2020. The Hawkeyes defeated the Huskers 96-72.

The talk of the offseason surrounding the Iowa men’s basketball team usually comes down to one thing — whether or not Luka Garza is coming back for his senior year.

“I think we’ll have an answer relatively soon,” head coach Fran McCaffery said Thursday in a Facebook live session. “I always encourage my guys to get all the feedback that you can so that you feel really good about your decision.”

Garza, an All-American center and the first player in men’s program history to earn National Player of the Year from a news outlet, declared for the NBA draft April 10, but hasn’t signed with an agent or committed to turning pro.

Due to the COVID-19 pandemic, the NBA has pushed back its deadline to Aug. 3 for early entries to remain in the Oct. 16 draft.

“It’s a different process for him than it would have been last year,” McCaffery said. “He would’ve had the opportunity to play in the Big Ten Tournament and the NCAA Tournament. And I feel like he would’ve played really well. Had he had those opportunities — he may have played his way into the first round [of the draft]. He would have also had opportunities to meet individually with teams and have individual workouts, as well as go to the NBA combine.”

McCaffery said Garza has had Zoom meetings with general managers of various NBA teams since he declared for the draft. Garza has also talked with agents — which is legal — to get feedback and information.

“Europe is obviously always another option for somebody like him,” McCaffery said. “He’s a guy that could command big money in the EuroLeague. He’ll have opportunities to play professionally should he choose to do so.”

Even while Garza’s decision still looms, he’s back in Iowa City working out with the team.

“He’s in the gym right now, 20 yards from where I’m sitting,” McCaffery said from his office.

McCaffery spoke about the upcoming season’s team as if Garza was going to be on it. Garza, Jordan Bohannon, Joe Wieskamp, and Connor McCaffery are the four captains for the Hawkeyes this upcoming season, the 11th-year head coach said.

“He’ll have opportunities to play professionally should he choose to do so,” McCaffery said. “I think he feels strongly about his teammates, about wanting to come back and be the national player of the year again and see what this team is capable of doing.”

Depth a strength for the Hawkeyes heading into 2020-21 season

Iowa’s roster is among the deepest in the country heading into next season — especially if Garza comes back.

Along with the four team captains, Iowa returns CJ Fredrick, Jack Nunge, and Joe Toussaint next season. All three have experience in the starting lineup.

Patrick McCaffery will also provide Iowa with depth next season, as will five incoming freshmen.

Guards Tony Perkins and Ahron Ulis provide Iowa with depth in the backcourt. Forwards Keegan and Kris Murray give the Hawkeyes length and athleticism.

Center Josh Ogundele — a London native — has not been able to make the trip to Iowa City so far due to the pandemic. When he does join the team, he’ll provide a physical post presence.

“It’s going to be a little bit of a challenge in terms of our guys recognizing we’ve got some veterans and being a little bit patient,” McCaffery said. “This young group is talented enough to play, and they know that. They’re also versatile, and they can provide some different things.”

Bohannon, Nunge, and Patrick McCaffery are all set to return to Iowa’s lineup after missing a majority of the 2019-20 season.

Bohannon played in 10 games before opting to shut down his season and undergo surgery on his hip.

“He’s in the best shape of his life,” McCaffery said. “He has really worked hard. I think by having the surgery when he did, he gave himself ample time to get ready for next year.”

Nunge tore his ACL in Iowa’s fifth game of the season, but should be ready to go to start the 2020-21 campaign, McCaffery said.

“He started right away — that’s what they do now with ACL tears,” McCaffery said. “He’s been diligent with his rehabilitation schedule, not pushing himself too hard or pushing himself hard enough, and I’m confident he’ll be back in the lineup.”

Patrick McCaffery dealt with health issues last season stemming from his previous battle with cancer. A team of nutritionists and doctors have helped him figure out his body.

“Patrick McCaffery’s circumstances were a little bit different, overcoming cancer and dealing with his TSH levels with the medicine he takes and his energy levels as a result — how it relates to his strength, his ability to put on weight and compete at this level,” McCaffery said.