With a lack of proper social distancing, non-mandatory mask wearing, and inadequate testing, no events should be happening – not even presidential ones. 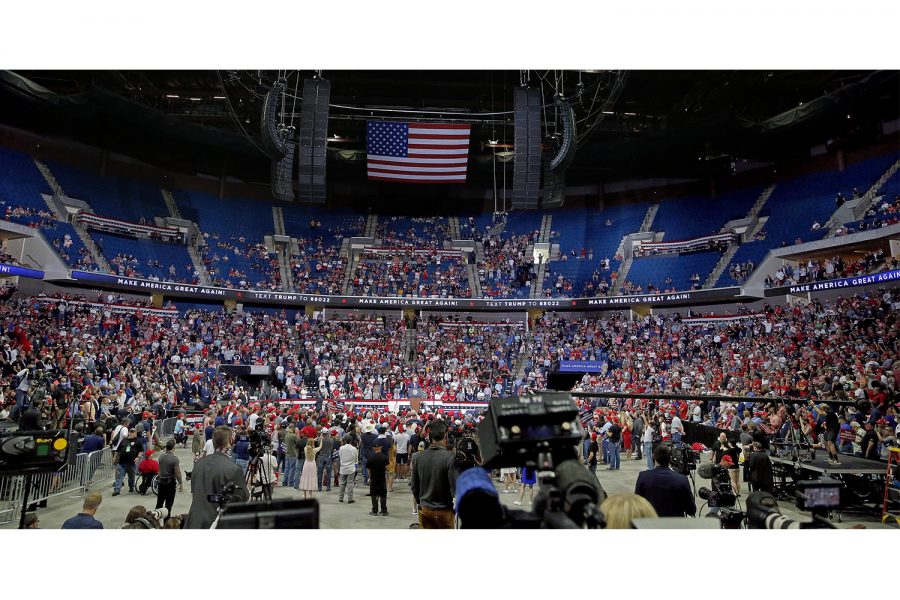 On June 15, Brad Parscale, the chairman of Trump’s reelection campaign, excitedly tweeted “ Over 1 M requests for the Trump Maga Rally in Tulsa on Saturday.” However, according to Tulsa officials, fewer than 6,200 were accounted for in the 19,000 capacity center. While this rally may have been small in scale, the return to the University of Iowa in the fall will not be nearly as unpopulated and could easily infect a large amount of the student body.

This rally serves as an example of what the UI should not do once students return back to campus. Despite events for freshmen such as Kickoff at Kinnick and On Iowa being helpful for the transition to college life, the University should cancel these events despite state guidelines suggesting it is now “safe.”

Any large events being held would be a massive disregard for the health and safety of participants. COVID-19 is still a concern in the United States, and many doctors warn about the disastrous consequences that could occur from holding big events.

Dr. Kavita Patel, who is a primary care physician, claimed that the Trump rally was set up for disaster because there is enough evidence to prove that this rally could be categorized as a “super spreader” event.

Proper precautions weren’t even taken during the event itself. For one thing, masks were optional despite CDC guidelines stating they protect other people from infection. Even though temperatures were taken before entering the arena, the Trump administration seemed to forget that many people who have COVID-19 are asymptomatic.

While Kinnick Stadium and the BOK Center that the Trump Rally was held in are not identical, they are both massive bowls meant to contain large numbers of people in closely packed areas. Currently, the university plans state that masks will be worn inside all university buildings, but do not enforce their usage elsewhere – including university events that happen in open air places.

While this may seem to be a step in the right direction, it does not do nearly enough to help prevent cross contamination between infected individuals and their peers.

This is a situation that could easily occur this fall. With over 30,000 students returning, it is likely that some will carry the virus but be asymptomatic and will spread the virus to other people. Large gatherings in university events will not only be dangerous should proper precautions not be taken, but may still serve to spread infection even if those precautions are met.

With the beginning of the reopening in many states, it is no surprise that the CDC recommends the continuation of social distancing. However, this event went against all the recommendations and progress that the United States has made trying to limit the spread of the disease.

Even though it is legal for sporting events such as fall football to occur, the university should not be packing the stadiums come August due to the warnings of healthcare professionals to keep maintaining social distancing.

There is an expectation of a possible outbreak in the late fall/early winter, and if students wish to return in the spring, proper action to maintain health-care safety must be taken. The first step in doing that is to install safe practices now and reinforce positive habits as soon as possible.