Despite the Supreme Court ruling on DACA, uncertainties for the program remain

The recent Supreme Court decision ruling that the Trump administration unlawfully terminated the Deferred Action for Childhood Arrivals Programs is a temporary win and victory for the immigrant community, but the permanent fate of DACA still remains uncertain. 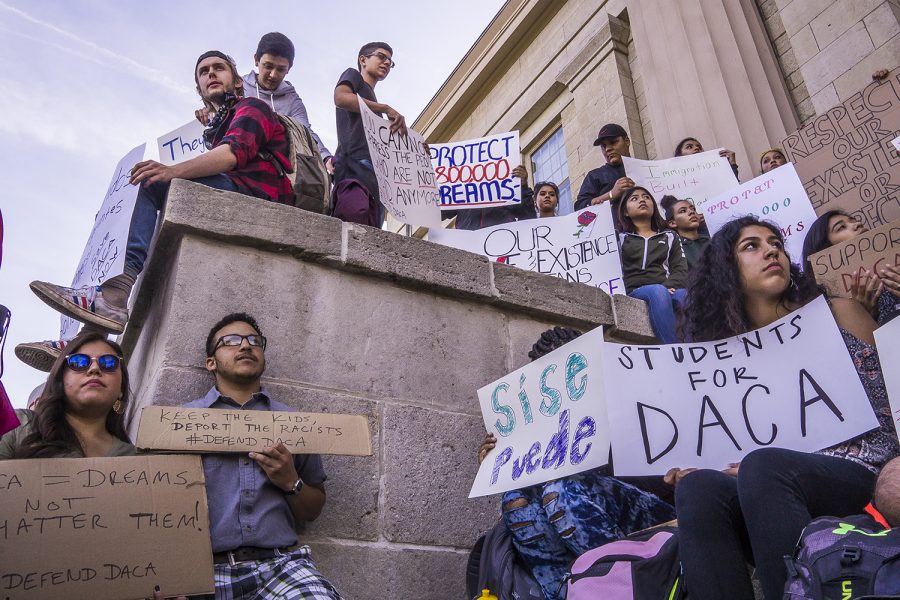 Supporters hold signs at the Old Capitol Building on Thursday, Sept. 7, 2017. The recent decision regarding DACA's rescission has been a highly controversial issue in national politics.

On June 18, The U.S. Supreme Court ruled in a 5-4 decision that the Trump administration unlawfully attempted to terminate the Deferred Action for Childhood Arrivals program – though the ruling is only a temporary reprieve for DACA recipients in Iowa City.

Jessica Malott, an immigration attorney with Malott PLC in Iowa City, said the supreme court ruling is not a permanent solution for DACA recipients.

“Really it was a ‘you didn’t follow the rules in order to end this program,’” Malott said. “They did not talk about whether the actual program at its core is legal or not.”

According to the United States Immigration and Citizenship Services website, DACA is a program implemented by the Secretary of Homeland Security on June 15, 2012, under the Obama administration. The program allows for certain people who entered the U.S. as children and meet additional guidelines to request “consideration of deferred action, for a period of two years, subject to renewal. ” Additionally, recipients are eligible for work authorization.

According to PennState Law Center for Immigrants’ Rights Clinic, the program has protected over 700,000 individuals in the U.S. On September 5, 2017, former Attorney General Jeff Sessions, under the Trump administration, announced DACA would be rescinded. Following the decision, several court cases challenging the end of the program were combined for Supreme Court review.

Malott said that while the decision is welcome news to her and her DACA clients, it gives the Trump administration an opportunity to end the program again, something she anticipates would happen if the President is reelected in November as it would be “quite a push,” to get it done prior.

RELATED: ‘Yo no soy un delincuente:’ Iowa agencies call for the release of immigrants from deportation centers amid COVID-19 pandemic

Malott said there are many DACA recipients within the Iowa City and Johnson County area, and she noted that she has had clients continually apply for renewal since the program was implemented in 2012.

Malott said DACA is not a path to citizenship or legal status in the U.S.

Malott said that the recent ruling essentially highlights three main points, and that she anticipates the U.S. Citizenship and Immigration Services to come out with further guidance for current and future DACA recipients. They are:

For the time being, DACA recipients will be able to continually apply for renewal.
The ruling potentially opens up the door for the U.S. Citizenship and Immigration Services to begin accepting initial applications for DACA, though it is uncertain when and if this will happen.
The reinstatement of Advanced Parole.

She noted that lawyers may not know anything in the immediate future as they wait for guidance by the U.S. Citizenship and Immigration Services, which is normally posted on their website.

“DACA is something that affects…so many people. It is truly a program that has benefited so many lives, and at this point, taking it away would be devastating. Because now, those people who would be kids when their parents brought them here, they have kids of their own, who are citizens because they were born here.” Malott said. “…really it’s a call to congress to come up with some sort of legislation because that is really what will end this DACA back and forth once and for all.”

Nadine Petty, executive director for the University of Iowa Center for Diversity and Enrichment, which works with UI students with DACA said in an email to The Daily Iowan that while the recent decision isn’t a permanent solution for immigrants, it is a victory worth celebration.

“It was a huge surprise to many and a beacon of hope since much of the immigrant community and allies were preparing for the worse. The decision has relieved a lot of stress for many people for the time being,” Petty said.

Petty added that while the decision provides hope for DACA recipients, it does not provide permanent security.

“DACA recipients have been carrying the burden of uncertainty of deportation since 2017. The ruling will allow them to begin the fall semester with one less immediate threat to navigate,” Petty said. “My hope is that lends itself to a decrease in anxiety levels for these students, mitigated mental health concerns, and an increase in DACA students who are welcomed and included in the US, and at Iowa in particular.”

Petty added students who are recipients of DACA face a unique psychological impact.

“It’s hard enough being a college student and a young adult without having to constantly worry about deportation and being ripped away from what is familiar,” Petty said. “Many of our students spend time they could be studying, socializing with friends, or doing typical college-life activities engaged in activism and literally fighting for their lives. Psychologically, this takes its toll.”

Petty said that this burden DACA recipients hold may never be relieved until action is taken within congress.

“…I don’t believe DACA recipients will ever feel fully safe in the U.S. until permanent legislation secures a permanent place for them in this country,” she said. “This is their home. I think people should be made to feel safe in their home.”

Monica Reyes, board president and co-founder of nonprofit organization DREAM Iowa said the ruling came as a victory for the DACA community.

“The night before I was actually filling out my renewal…thinking that it might be the last time I renewed my DACA, so when I heard the news the next morning I was definitely happy and excited, I know personally all of the doors that the DACA program has opened for myself and I am excited for young undocumented Iowans that will now be able to apply for the first time.” said Reyes, who has been a DACA recipient since the program was first implemented in 2012.

Reyes said she came to the U.S. crossing the desert at the age of three, along with her mother and 1-year-old sister. She noted that while the ruling is a step in the right direction, there is still more work to be done in protecting immigrant families.

“Nevertheless, the program was designed to leave our hardworking parents and families in the shadows, and it has created an internal division within the family structure,” Reyes said.

Reyes said that while this decision adds momentum to the push for concrete reform among undocumented and immigrant communities, people still need to be proactive in seeking change.

“Locally and in the state of Iowa we can do many things that support the immigrant community and then have that ripple effect at the federal level,” Reyes said.