Until the COVID-19 pandemic hit, Noel planned to go right into her professional career. 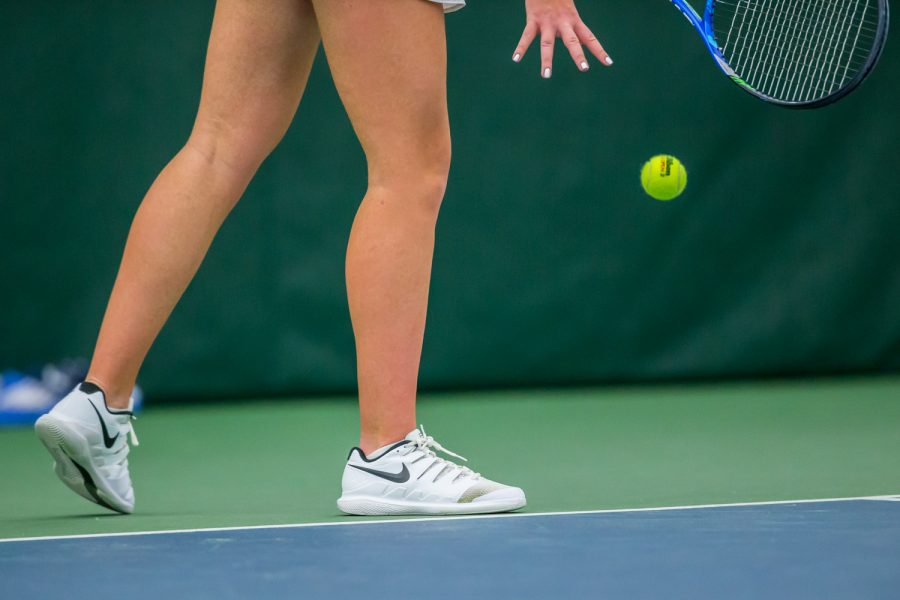 Iowa's Sophie Clark prepares to serve during a women's tennis match between Iowa and Nebraska at the HTRC on Saturday, April 13, 2019. The Hawkeyes, celebrating senior day, fell to the Cornhuskers, 4-2.

The Iowa women’s tennis team landed one of the best recruits in the country in its 2020 class ⁠— Alexa Noel, a right-handed server out of Summit, New Jersey. She’s ready to make an impact for the Hawkeyes.

Noel competed in the finals of the 2019 Wimbledon Junior tennis tournament, won the doubles championship of the 2018 US Junior Fed Cup for the US, and is currently ranked No. 7 in the International Tennis Federation junior rankings. She also boasts a 2020 ITF Cancún tournament championship and a USTA Girls 18s National Championships doubles title among other career achievements.

“My goal was always to go straight to professional,” Noel said. “But I made a decision when the pandemic was happening and we didn’t know when the ITF was going to start again that it could be a great thing to go to college, get some matches in, be in a different environment, and try to get better.”

Noel said that her deep family roots in Iowa were what sparked her interest in the University of Iowa.

“My dad’s parents still live in Iowa, my mom’s parents recently moved out of Iowa, both of my parents grew up there, and my mom graduated from the University of Iowa,” Noel said. “I thought it was really awesome that my whole family is from there, so I wanted to go there.”

Head coach Sasha Schmid said that her incoming freshman is an experienced player who is in a position to take off.

“She’s incredibly talented and can play on any surface,” Schmid said. “She really loves to dictate with a big serve and her forehand, and she has a really talented backhand slice too.”

After playing in some of the top junior and professional tournaments around the world, Noel said she hopes her background will help the team.

“Hopefully I can bring my experience to Iowa and my knowledge of how to deal with certain situations off the court or during a match,” Noel said. “I feel like I have been in a bunch of different situations whether it is pressure moments during tight matches or needing to push harder in a specific workout.”

College was not originally a part of the New Jersey native’s tennis roadmap, but living in the residence halls and getting the college experience brings a lot of excitement for Noel.

“It is another step on the way to my ultimate goal,” Noel said. “Living on campus and being around new people and different people in sports can open your mind to see things from different perspectives.”

The Hawkeyes were undefeated this past season in matches where they won the doubles point but only 1-6 when they lost it.

Noel said she hopes to come in and help push Iowa’s doubles play to a higher level.

“Doubles is huge, and Alexa won a national championship last year and then got a wild card in the main draw for the US Open doubles, so obviously she’s incredibly experienced in doubles,” Schmid said. “I think the aspects of her singles game all translate to doubles and probably even more, so her energy bubble and excitement come across in doubles.”

Schmid said that Noel’s competitiveness and her grit level are what makes her different and what allowed Noel to reach a career-high No. 4 ranking in the ITF junior world rankings this past year.

“She has played all over the world, and that is not always easy to travel by yourself, be in new countries, and figure out logistics,” Schmid said. “She has been on some very big stages, and she has handled all of that. She is very good and very confident, but she is also very humble.”

As Noel looks forward to suiting up for the Hawkeyes this year, her ultimate goal is always in mind.

“I really hope that I can make an impact on women’s tennis,” Noel said. “I hope that I can help the team during the season and reach my own personal goals, and I know that Iowa is giving me a huge opportunity to do that.”