Protests were scheduled across the state on Monday to get the attention of Iowa Gov. Kim Reynolds. Iowa City protesters went to Washington, Iowa, where they said the governor was staying. 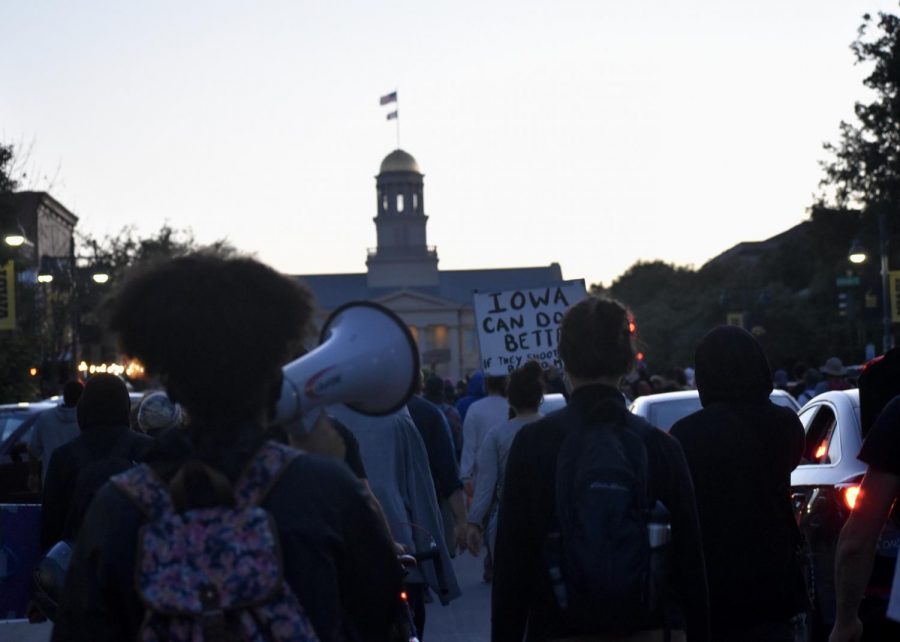 Protesters march up Iowa Avenue to the old Capitol during a Black Lives Matters March on June 23.

Iowa City protesters marched in solidarity with Des Moines Black Lives Matter and several other cities across the state on Monday. After a short march in Iowa City, protesters headed South to Washington, Iowa, where they said Gov. Kim Reynolds was staying in a hotel.

Representatives for Reynolds did not respond to requests to confirm if Reynolds was in the hotel by press time.

The Iowa Freedom Riders, who organized the protest, announced earlier in the day on their Instagram account that protesters would head toward Interstate 80, and warned attendees to expect police presence.

Instead, the march headed down North Dubuque Street and then turned away from the highway. Organizers said the announcement that the group would go to the interstate was a planned decoy to prompt police to waste time and resources.

The on-ramp to I-80 at Dubuque street was closed off and at least two State Patrol cars were parked at the exit.

Near the Capitol in Des Moines, protesters were met with police who advanced on them from both sides of the street, according to The Des Moines Register. 18 arrests were made, and police pepper-sprayed several protesters after reading dispersal orders.

After several of the demands of the Iowa Freedom Riders were addressed by the Iowa City City Council at a meeting June 16, the group has shifted its focus toward demands of Iowa Gov. Kim Reynolds.

According to a live video on the Iowa Freedom Riders’ instagram page, protesters were met with a line of police outside a cafe and hotel in Washington, where protesters said Reynolds was staying. They read a list of demands for Reynolds.

The group has published four demands for the Governor:

Iowa State Legislature decriminalizes cannabis and expunges the records of all charged with cannabis offenses.
Reduction of probation length for ex-convicts, and no drug testing for marijuana.
Passing of an executive order reinstating the voting rights of all Iowans with felony charges who have served their sentences.
Iowa State Legislature ends juvenile detention and reallocates resources into education and public mental health resources.

Wylliam Smith, a Black activist who works with the Freedom Riders, said in an email to The Daily Iowan that the group went to Washington to put pressure on Reynolds and show their commitment to getting their demands met.

Editor’s Note: Wylliam Smith is a former columnist for The Daily Iowan.

“The IFR has teamed up with the Des Moines Black Lives Matter group and intend to work together to apply pressure on Kim Reynolds to showcase a united front against the racist practices in Iowa,” he said.

He said the group wants Reynolds to take an active stance on the Black Lives Matter movement.

Organizers have called Reynolds to pass an executive order reinstating voting rights for felons by July 4. Reynolds met with Des Moines Black Lives Matter on June 12 to discuss drafting the order, and said on June 16 she would issue the order, according to Radio Iowa.

After the protesters in Washington laid down on the ground for several minutes in silence, State Patrol officers read a dispersal order and the protesters left.