Bluder has a career full of highlights after two successful decades as Iowa's head coach. 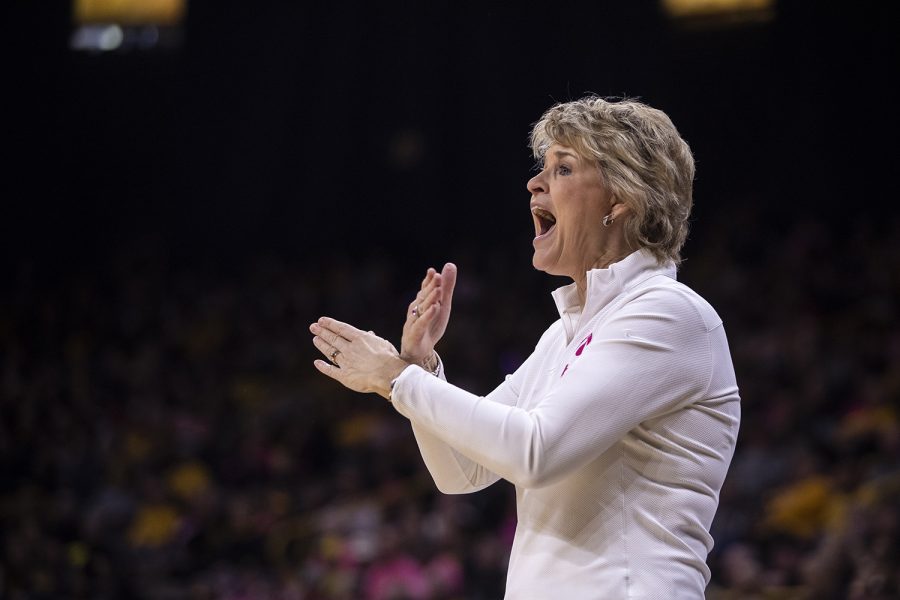 Iowa Head Coach Lisa Bluder instructs her team on what to do during a women’s basketball between Iowa and Wisconsin at Carver-Hawkeye Arena on Sunday, Feb. 16, 2020. The Hawkeyes defeated the Badgers 97-71.

When Lisa Bluder was hired as the head coach of the Iowa women’s basketball team, she was given a five-year contract for what she considered her dream job.

Those five years turned into 20 — and counting.

“I never dreamed that five years would turn into 20 years,” Bluder said.

In those 20 years, Bluder has a lot to look back on, including two Big Ten Tournament Championships, one Big Ten Regular Season Championship, 14 NCAA Tournament appearances, and making it to the Elite Eight. She also coached one of the greatest Hawkeyes of all time in center Megan Gustafson.

Her first Big Ten Tournament Championship came in 2001, which was her first season as head coach. The season before, Iowa was 9-18. When Iowa defeated Purdue to win the championship, it was its 20th win of the season.

“It’s one of my fondest memories and I have a lot of good memories of basketball at Iowa,” Bluder said. “Certainly, that first year when nobody expected anything out of us, I mean we would have probably been last in the Big Ten that year and then to go and win it all, it was just so special.”

Bluder said the team bonded together to form a fabulous unit in nine months. The Hawkeyes made the second round of the NCAA Tournament before losing to Utah.

Fast forward to the 2007-08 season, and the Hawkeyes were in a similar position. After being 14-16 the season before, the Hawkeyes had something to prove, so they won the Big Ten regular season championship.

“Those years are special,” Bluder said. “When you know everyone counts you out and then you do something special. Abby Emmert [now Stamp] was one of our captains that year and she’s still on our staff till this day, she’s now an assistant coach for us. Those memories, those bonds that you form through persevering and then achieving something really great, those last forever.”

Few programs have had the season that the Hawkeyes did in 2018-19. That season, the Hawkeyes won the Big Ten Tournament, made the Elite Eight, and had the national player of the year in Gustafson.

“It was just one of those magical rides,” Bluder said. “I mean it was a year where we didn’t have any injuries, everybody really got along, there was no drama, and everything was right in place, so it was kind of magical. Of course, having the right people in the right places, I mean you got Megan, who’s the player of the year in the nation. I still can’t even grasp that. To this day it’s still hard for me to imagine that we were able to coach the player of the year nationally.”

What Bluder said is remarkable about these 20 seasons is that two members of her staff have been there for all them, associate head coach Jan Jensen and special assistant to the head coach Jenni Fitzgerald. This is almost unheard of in the world of coaching.

Not all of Bluder’s success the past 20 years has come at Iowa. In 2001, she was an assistant coach at the World University Games, which Team USA won. In 2015, she was the head coach of the Pan American team and won silver.

“There’s nothing like when you win the gold medal, hearing the national anthem and watching the American flag go to the rafters and seeing the kids get their gold medals around their neck,” Bluder said. “It’s pretty special.”