Two Iowa alums were interviewed for the popular documentary that took over the sports world. 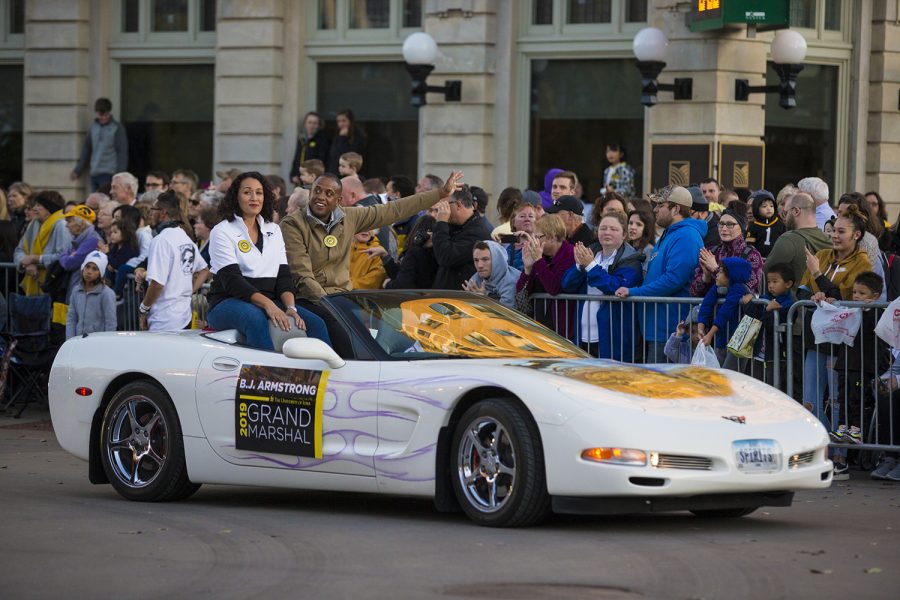 Grand Marshal J.P. Armstrong rides in a Corvette during the 2019 Homecoming Parade on Oct. 18 in Downtown Iowa City.

ESPN’s documentary The Last Dance, a 10-part series on Michael Jordan and the Chicago Bulls, took over the sports world for much of April and May. Two University of Iowa graduates with firsthand experience of the Bulls’ dynasty were among the dozens of people interviewed for the project.

B.J. Armstrong, who returned to Iowa City last fall to serve as the Grand Marshal in Iowa’s homecoming parade, played four seasons at Iowa before being drafted by the Bulls in the first round of the 1989 NBA Draft. He won three NBA titles with Chicago in the early ‘90s.

Armstrong said that his interviews for the series were completed over two years ago.

“It was at least two or three years ago, I can’t recall exactly,” Armstrong said. “They had reached out and asked if I would do some interviews for a documentary. I had no idea if the interviews would be used.”

The Last Dance was originally set to air in June, accompanying the 2020 NBA Finals. The project’s release was moved up to satisfy the lack of sports programming due to the COVID-19 pandemic.

Armstrong was in the same boat as many sports fans when he found out when and how the series would be broadcast.

A lot of the behind-the-scenes footage used in the docuseries was captured by a camera crew that was granted unprecedented access to Jordan’s final year with the Bulls, at the time, the final year of his career before he returned to the league and finished his playing days as a member of the Wizards.

“If you interviewed who covered him with the Bulls, I’d be very surprised if people didn’t say that he was incredibly accessible and very easy to talk to,” Isaacson said. “ He would, more than any other superstar I’ve ever covered, he would stand at his locker and talk to every last reporter, whether they were from The New York Times, or The Chicago Tribune, or the smallest paper in the smallest town in America. Or, which often happened, [a reporter from] a foreign country who just wanted him to say hello into the microphone.”

A large theme of the docuseries was Jordan’s competitiveness and sheer will to win at everything he did. This included baseball, golf, and of course — basketball.

“You don’t reach that level of excellence and not have some part of your personality that is extreme,” Armstrong said. “For my whole life, that was just normal. If you’re going to be the best, there’s a certain something that pushes you over the top. When you get to the NBA, everyone has talent, everyone can score, everyone’s a good athlete.

“What separates the good players from the great players? Well, there’s something extreme about your personality. It’s a little different than everyone else’s. Whether you’re a Magic Johnson, Larry Bird, what have you, these are highly competitive people.”

Armstrong believes that the series chronicling Jordan’s greatness on the court and his complex life away from it will have a lasting impact on sports fans.

“I think it was good that you guys get to have a discussion about someone that you have all heard about, obviously,” Armstrong said, “Then you got a chance to get a little glimpse and get an introduction to a maybe a player that you didn’t know before — you just heard about.”