Iowa City celebrates Juneteenth amid a pandemic and protests

Iowa City and other towns in Iowa are holding virtual events for Juneteenth to reach community members who can’t leave their homes. Some organizations are also hosting days of actions in response to the recent killings of Black Americans. 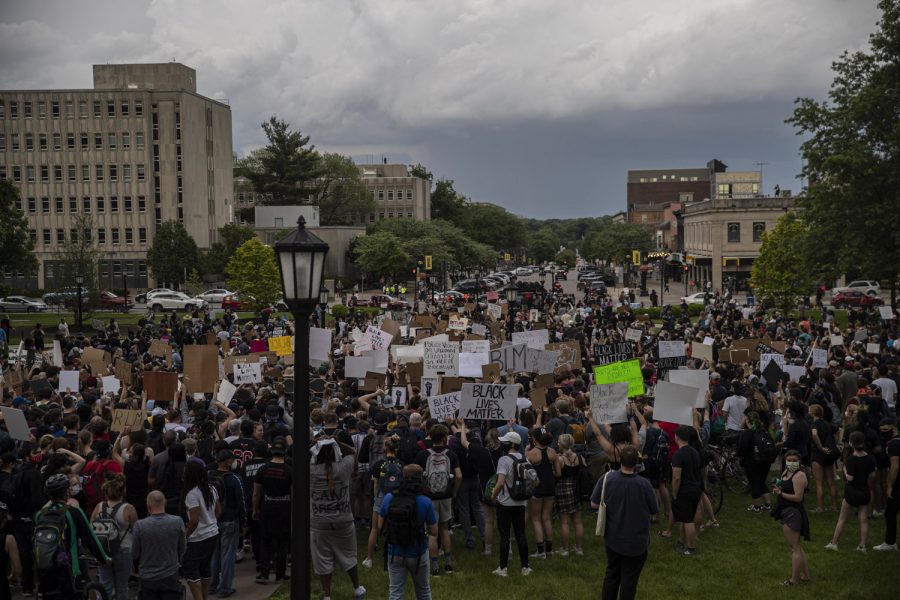 A march to support the Black Lives Matter movement and protest police brutality begins at the Pentacrest in downtown Iowa City on Thursday, June 4. The crowd, which contained about 2,500 people according to organizers, is seen here beginning the march by exiting the east side of the Pentacrest before they would head south on Clinton St.

Amid the coronavirus pandemic, many organizations in Iowa City and across the state are planning virtual events to encourage the celebration of Juneteenth from their homes.

Juneteenth, which takes place on June 19, commemorates the end of slavery in the United States. The official proclamation took place in Texas in 1865, where African Americans had remained enslaved for two years after President Abraham Lincoln’s Emancipation Proclamation freed enslaved people in the Confederacy.

The festival will feature musical guests and conversations between politicians and activists, MarKaus said.

MarKaus said he wants allies to attend the event, support Black-owned businesses, and educate themselves on the history of Juneteenth.

In a celebration that ends on Saturday, the African American Museum of Iowa is hosting a virtual Juneteenth celebration. North Liberty City Councilor RaQuishia Harrington, who helped organize this event, said the city’s annual barbeque moved online in an effort to continue to reach community members amid COVID-19.

Due to the recent killings of George Floyd, Breonna Taylor, and other Black Americans, some Iowa City organizations are also holding days of action.

One of these events is the Johnson County Kids Day of Action held in Coralville at 11 a.m. on Saturday. Harrington said the organizers hope to educate kids on the importance of Juneteenth and ways they can be activists for the Black community.

In Iowa City, local activist group the Iowa Freedom Riders have organized another in-person event that will occur Saturday on the Pentacrest. According to the group’s Instagram page, there will be a march from 1 p.m. to 4 p.m., and then a cook-out and live performers.

Andrew Juhl, founder of the trivia organization Andrew’s Bar Exam, is hosting Juneteenth Trivia Night Friday from 7 p.m. to 9 p.m. Juhl said he wanted to do something special this year for Juneteenth.

“[African Americans] don’t have enough dates that they can celebrate and appreciate their own culture and their own heritage,” Juhl said. “Any time that we, as allies, can do something to support them, we should, especially given the last few years and specifically the last few weeks.”

Juhl said he collaborated with the African American Museum of Iowa to host the trivia event and worked with students from Iowa BIG — an initiative-based high-school program — to write the trivia questions.

“Most of the questions are celebrating Black iconoclasts,” Juhl said. “I feel like Americans forget, far too often, how much of their culture comes from Black culture.”

Regardless of how people choose to engage in Juneteenth, organizers and activists said they want Iowans to understand the importance of the holiday.

“It’s an opportunity to really celebrate culture and everything that it means to be a Black person in America,” Harrington said. “To me, it also means continuing to fight for justice for equitable outcomes for myself, my family, and the people in my community.”