Several freshmen made an impact for the Hawkeyes last season. Now, with a year of experience, that class will be a strength for Iowa. 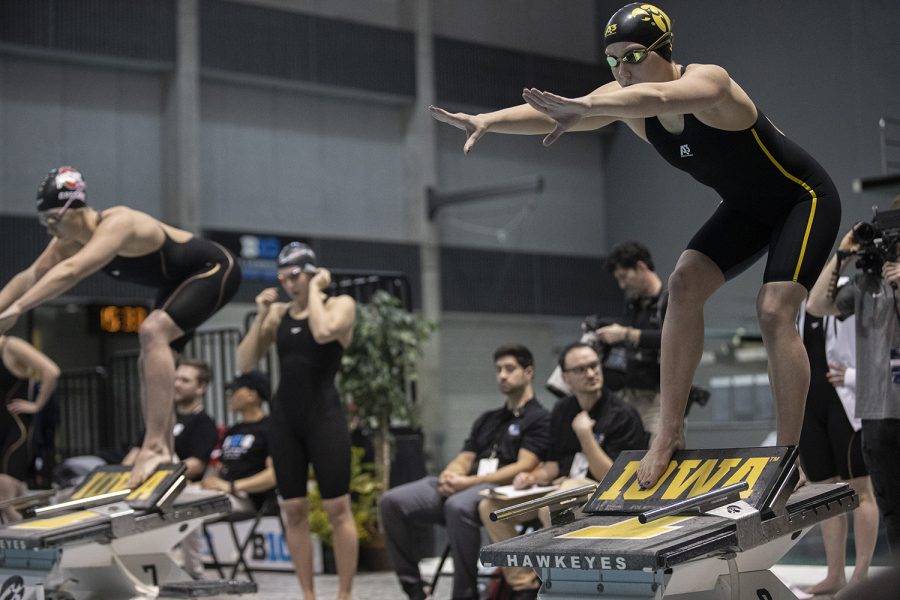 Jake Maish for The Daily Iowan

Aleksandra Olesiak awaits her turn to compete in the 400 yard medley relay during the 200 yard individual medley event at the WomenÕs Big Ten Swimming and Diving Championships on Thursday, Feb. 20, 2020 at the CRWC. Iowa finished ninth overall in the event with a time of 3:36.18.

Last season, the Iowa swimming and diving teams performed well, improving as the season went on. For many of Iowa’s athletes, the season was the first they spent as a Hawkeye.

A staggering 24 of the 62 spots on last year’s combined men’s and women’s roster were taken by freshman student-athletes, with 17 freshmen on the 34-person women’s roster. Last year’s freshmen didn’t falter when it mattered most ⁠—at the final and most important meet of the year.

At the women’s Big Ten Championships last March in Iowa City, freshman Millie Sansome broke the school record in both the 100 and 200-back. She broke her own record in the longer race.

Even though Burvill and Fluit, two of the best swimmers in Hawkeye history, have swam their last collegiate race, they have left a lasting mark on the Iowa program.

“I feel like being a senior captain helped me leave a legacy by leading and motivating the team to do their best,” Fluit said following the Big Ten Championships. “We came a long way since I was a freshman, and I feel like I’ve helped make that change from being good to being great as a team.”

In all, four of the five school records set by the women’s team at last season’s Big Ten Championships involved at least one freshman swimmer.

Drake swam the 200-fly in 1:55.89 in a time trial at the conference championships. The time was almost two seconds faster than the previous school record, also held by Drake. The time qualified the Marion, Iowa native for the National Championships — a meet that was ultimately canceled because of the COVID-19 pandemic.

For the men’s team, freshmen posted team season-bests in four individual events in 2019-20. Diver Mohamed Neumann topped the team leaderboard in the 1-meter and platform diving events and mid-year addition Sergey Kuznetsov and Ryan Purdy came away with the team’s fastest times of the year in the 100-fly and 100-back.

Other swimmers who are returning to Iowa next year accounted for the top times of the season in all but one event. Graduated senior Michael Tenney took the top spot on the team leaderboard in the 200-fly with a time of 1:44.18.

Now with a season of experience, last year’s freshman class, along with all the other returning athletes, is ready to do big things for the Black and Gold next season.