After only losing two seniors from last season, the team will be full of familiar faces in 2020. 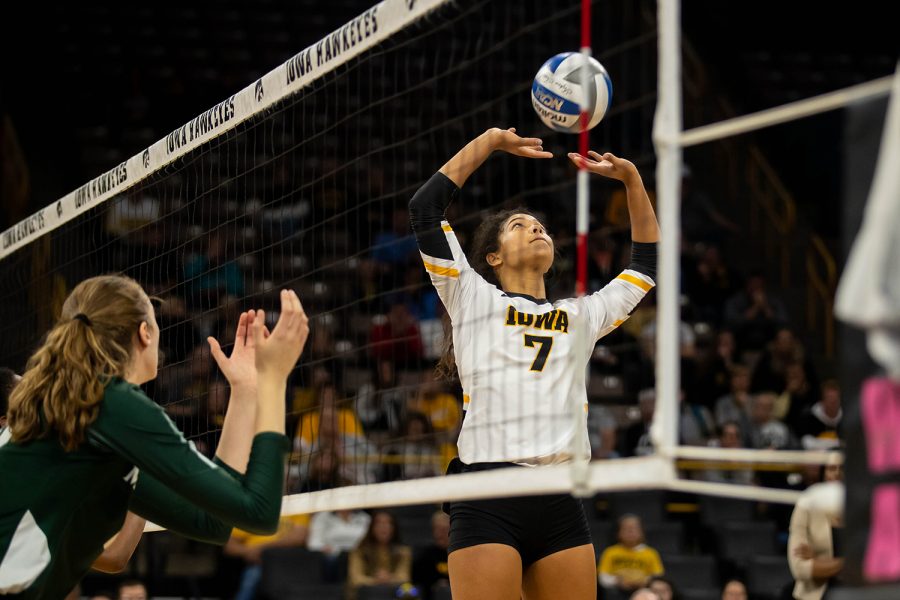 Iowa setter Brie Orr sets the ball during a volleyball match between Iowa and Michigan State at Carver Hawkeye Arena on Sunday, October 12, 2019. The Hawkeyes were defeated after 5 sets.

Iowa volleyball had a down 2019 season, which was plagued with injuries. The team finished 10-21 overall and 4-16 in the Big Ten, missing the NCAA tournament.

Only two seniors are gone from the 2019 lineup: Emily Bushman and Meghan Buzzerio.

For the first time in program history, Iowa volleyball will not be playing at Carver-Hawkeye Arena in 2020. Instead, the Hawkeyes will start their season at Xtream Arena at Iowa River Landing in Coralville.

With most of its starters coming back and head coach Vicki Brown now with a year of head coaching experience under her belt, the volleyball program should redeem itself next season.

RELATED: Iowa volleyball moving past NCAA violations, looking ahead to next season

Orr has been a staple for Iowa volleyball ever since she arrived her freshman year. She appeared in all matches as a freshman and started all matches her sophomore year. In 21 matches her junior season in 2019, which was cut short by a concussion, she had 783 assists.

With Orr healthy again, she will be the rock at setter that the team needs.

Buzzerio showed her versatility her sophomore season after setter Brie Orr went down with a concussion. She is willing to take on any role to help the team, although she’s shown her strength in hitting. Buzzerio played in every match for Iowa last year and led the team with 32 aces despite stepping in as setter at the end of the season.

As a junior in the 2019 season, Hughes played in 29 matches. She led the team with 334 kills and held two six-game streaks of double-digit kills during the season.

Hansen was solid off the bench for the Hawkeyes in the 2019 season, playing in 29 matches with two starts. She tallied 135 kills as a freshman.

Hansen will provide the depth the Hawkeyes need as a hitter in the 2020 season.

Clayton played in 30 matches her sophomore season. She amassed 132 kills and led the Hawkeyes with 80 blocks.

Clayton will provide dependable blocking as the starting middle blocker this season.

Boyer, a defensive specialist, led the freshmen in appearance time in the 2019 season, playing in 28 matches with three starts. This year, Boyer made program history by being the first volleyball player to make the U.S. Collegiate National Team.

A probable starter for the Hawkeyes this year, Boyer will join the experienced Halle Johnston on the back court.

Johnston started every game as Iowa’s libero her junior season. She was second in the Big Ten with 517 digs and had two matches with a career-high 30 digs.

As the starting libero, Johnston will be a part of Iowa’s rock-solid back court.