Howling: A way of showing solidarity in Iowa City’s Northside

What started as a small initiative in Denver ended up trending worldwide. At 8 p.m. every night, residents in the Northside of Iowa City have taken to their porches and windows to howl with their neighbors. 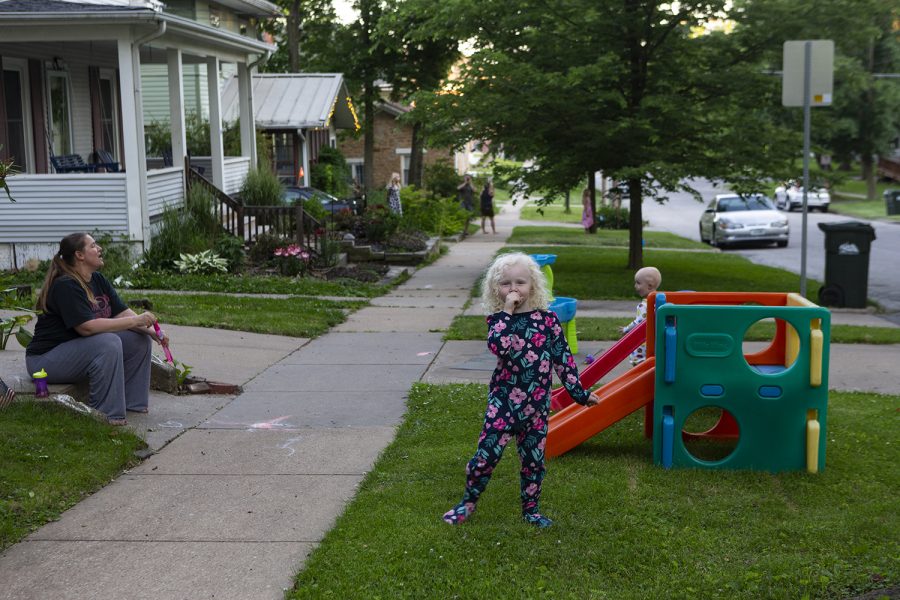 Kristine Djerf howls with her children, Sylvia and Oscar, on Tuesday, June 16, 2020 at their home in the Northside in Iowa City. Every night at 8 residents in the neighborhood stand outside and howl together for a few minutes to raise morale.

It’s 7:55 p.m. A golden sunset cascades through the trees while some Northside residents on North Johnson Street emerge from their homes and step onto their porches. Among the residents is Kristine Djerf, her mother, Pam, and Kristine’s children, Sylvia and Oscar.

“Are you ready to howl?” Djerf asks her son.

Oscar responds with a very cute “awoooo” while running around the yard.

The time reads 8 p.m., and it begins right away — howling. The sound erupts throughout the historic neighborhood, high and low pitched cries ringing across the streets and Victorian-style houses — reminiscent of “the twilight bark” from the film *101 Dalmatians.*

After a couple of minutes, the howling subsides. Neighbors clap briefly together and then disappear back into their homes.

In a neighborhood on the Northside, some residents have taken to the international trend of howling at 8 p.m. After receiving a text from her neighbor, Djerf said she joined her community on their first night of howling on April 11.

Their reasoning for howling? To show support for the people on the front lines fighting COVID-19.

“It’s a community feeling,” Djerf said. “I go out, I see my other neighbors doing it, it’s something for my children to see, community involvement — it’s hard with them being so little. It’s just a good feeling, and while I’m not a first responder, I’m not a front liner, it’s a way to show support, that we appreciate everything they’re doing.”

Abby Thornton, a Northside resident and University of Iowa student, decided to start howling with her roommate because they wanted to feel a part of the community, saying that they thought it would be funny to howl.

“We’ll be sitting and eating dinner and talking, and then it’ll be eight o’clock,” she said. “…We’ll stop what we’re doing and go stand on our front porch and howl. And one time, we wanted to be the first people in our neighborhood to do it, so we waited exactly till eight.”

Shelsea Ochoa and Brice Maiurro, who started the trend and Facebook page, “Go Outside and Howl at 8 p.m.,” said that people howl for several different reasons, whether it be for front-line workers, people who have lost loved ones, the Black Lives Matter movement, and more.

The duo began the howling operation on March 27 at their location in Denver, CO.

The couple got the idea from a friend of theirs who grew up in Topanga, California, where, at sunset, the locals would howl. Because they wanted it to be dark but didn’t want to wake people sleeping, Ochoa and Maiurro decided that 8 p.m. was a satisfactory time to begin.

“We were kind of bored at home, kind of feeling a little pent up because of COVID, and we thought it would be a cool way to connect with people around us,” Ochoa said. “And we thought we could maybe get some of our friends to do it.”

What started as a unique, small initiative ended up as a global trend. The Facebook page itself has over 570,000 members as of June 18, including members from all 50 states and 99 countries. Within its first 24 hours, Maiurro said the page had 8,000 followers.

The duo noted that they have been outspoken about the importance of the Black Lives Matter movement on the howling page, saying that some people have responded with anger.

Ochoa said that having the Facebook page has been an eye-opening experience, with regards to hearing the collective voices of people within the national and international community.

“I think the howling, the experience with watching a small idea Shelsea and I had turn into this national movement — and COVID in general — really gave me a feeling of what people can accomplish in the face of adversity,” Maiurro said.