The Broncos have selected an Iowa player in each of the past three NFL Drafts. 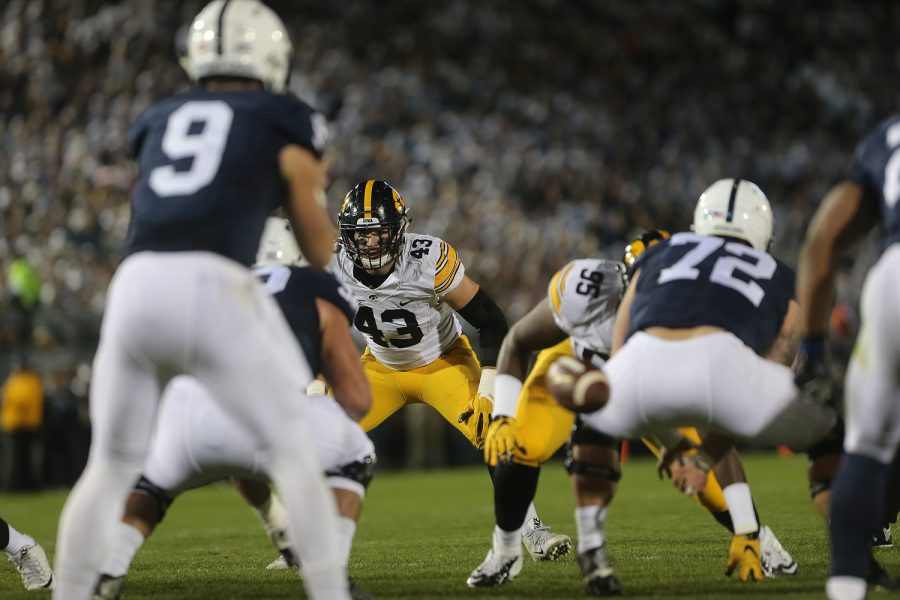 Take a trip west on I-80 from Iowa City to I-76, and you’ll soon find yourself in Denver, where three Hawkeye football players have been drafted in the past three seasons.

Linebacker Josey Jewell was drafted in the fourth round of the 2018 NFL Draft by the Denver Broncos. The next year, Denver selected tight end Noah Fant in the first round. This year, cornerback Michael Ojemudia was a third-round selection by the Broncos.

All three are expected to contribute for the Broncos in 2020. Here’s what they have done in the past and what to expect this season.
Josey Jewell
The Decorah, Iowa native finished his senior season at Iowa on a high note. He was a consensus All-American and the Big Ten’s Nagurski-Woodson Defensive Player of the Year after leading the conference in tackles.

In Jewell’s rookie season in Denver, he appeared in all 16 games with nine starts and tallied 58 tackles and three passes defended.

Last season, Jewell had a 23 percent reduction in percentage of available defensive snaps taken and played in 15 games, missing one due to an ankle injury. Starting three games, he had 38 tackles and 1.5 sacks with two fumble recoveries.

ESPN has Jewell as the second-string right inside linebacker behind veteran Todd Davis on Denver’s depth chart for the upcoming season. Based on that, Jewell will probably play around the same number of snaps this season as last season. Head coach Vic Fangio and defensive coordinator Ed Donatell are in their second seasons in Denver, so Jewell should be more familiar with the system.

Jewell can make the most of this opportunity by being a consistently reliable player in pass coverage, while remaining an efficient tackler.

RELATED: Ojemudia selected by Denver Broncos in third round
Noah Fant
Finishing his college career with 19 receiving TDs — the most for a tight end in Iowa history — Fant performed right away for the Broncos. He played in all 16 games and caught 562 yards for three TDs.

This is all considering that the Broncos had an unstable passing attack with three different starting quarterbacks – Joe Flacco, Brandon Allen, and Drew Lock, the latter two being inexperienced. Also, the offense was guided by first-time NFL offensive coordinator Rich Scangarello, who was fired after the season.

Replacing Scangarello is Pat Shurmur, who was previously the head coach of the New York Giants. The last time Shurmur was an offensive coordinator was 2016-2017 with the Minnesota Vikings. In 2017, he had a high-powered offense, which included tight end Kyle Rudolph making the Pro Bowl with 532 yards receiving and eight TDs.

With Lock ready to take over the quarterback position full time and Shurmur’s electric offensive scheme, look for Fant to improve this season – especially in scoring situations — and be one of the top tight ends in the AFC.
Michael Ojemudia
A steady cornerback for the Hawkeyes the past two seasons, Ojemudia led the Hawkeyes in interceptions with three this past season and was named to the All-Big Ten Third Team.

Ojemudia should be in position to compete for a starting spot in the Broncos’ secondary.

Fortunately for Ojemudia, the position typically has multiple substitutions and special packages that should allow him to have some playing time during the season even if he isn’t on the starting unit. Special teams are another place where Ojemudia should see time since many teams put young defensive backs in those situations.