After five decades of working in the religious-studies department at the University of Iowa, Professor Jay Holstein is reflecting on a legacy full of lectures and learning. 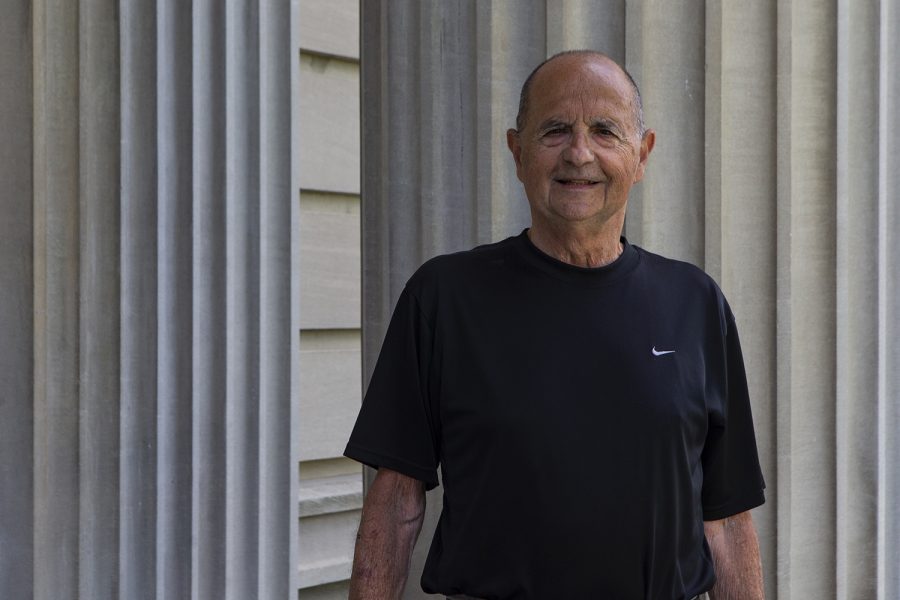 Dr. Jay Holstein poses for a portrait outside Macbride Hall on Wednesday, June 17, 2020. the J.J. Mallon Teaching Chair in Judaic Studies has taught at the University of Iowan since 1970.

Professor Jay Holstein came to the University of Iowa in 1970 to fulfill a three-year teaching contract. 50 years later, Holstein — now the J.J. Mallon teaching chair in Judaic Studies — said he never imagined then that he would still be teaching on the UI campus.

“I never ever for a second believed that I would be here for 50 years,” Holstein said. “I had no idea where the state of Iowa was – I confused it with Idaho.”

Holstein said he was originally hired as an assistant professor with the task of teaching courses in Jewish studies. The now 82-year-old professor started out with a great interest in the Hebrew Bible, or the Old Testament.

Holstein said he remembered what a daunting task the idea of lecturing to hundreds of students in the Macbride Auditorium at the UI once seemed like.

“Every lecture’s a new lecture,” Holstein said. “If you don’t make contact with them, their boredom saturates the auditorium — it just about overwhelms you.”

Joe Weeg, a retired lawyer who participated in his first class with Holstein in 1973, said in an email to The Daily Iowan that he was instantly hooked on the ideas of life and raw humor Holstein incorporated into his lectures.

Holstein said his teaching methods have gradually evolved in his time at the UI, noting that a key feature in his teaching style is concocting imaginary conversations to answer presumed questions he anticipates students will have.

“Sometimes you hit the mark, sometimes you don’t, sometimes you bore them to tears, and every once in a while magic strikes and they’re in the grip of what it is that you’re talking about, and it’s an experience the likes of which you will do almost anything to repeat,” Holstein said.

Lecturing on any given subject forces one to understand the content and materials in new ways, Holstein added.

“You wouldn’t want to teach the same thing in the same way for 50 years — hell, for two years — so you constantly need to be prodded into seeing things you had not seen before,” Holstein said.

RELATED: 15 faculty members laid off within College of Liberal Arts and Sciences amid budget cuts

Amid the global outbreak of the novel coronavirus pandemic, Holstein said the UI’s campus-wide switch to a virtual teaching format has been a challenge. He said he considers himself to be “computer illiterate.”

Holstein has taught various courses, from Quest to Human Destiny to The Bible to the Holocaust, and he said he never anticipated the hundreds of emails he would get from former students to thank him or make note of something that stuck with them after his classes.

UI alumni like David Mennie, graduate of the College of Law and now attorney, said that walking into Holstein’s Judeo-Christian Tradition class on his first day of his undergraduate education made a profound influence on his academic and professional career.

“One of the key things I learned from Professor Holstein’s classes was to pay very, very close attention… and ‘not to be asleep at the switch’ as he’d always say,” Mennie said. “… That has been very influential on everything I’ve done.”

He took all of Holstein’s classes in pursuit of his undergraduate education, Mennie said, and he also encouraged his friends and girlfriend to take the professor’s classes.

“He’s been the single greatest teacher in my entire life,” Mennie said.

“I think it’s probably pretty impossible to overestimate the impact he had on me both when I was there and subsequently… He was the most impactful professor, which maybe sounds strange coming from somebody who’s going into research science,” Amanda said. “But he got me to think very carefully…about myself, how I made choices, and what I want in my life.”

Holstein said he is grateful to the UI community for serving not just him, but his family — including his two children — over the years.

Currently, Holstein said he is taking things one day at a time. He is slated to instruct in two courses for the fall 2020 semester, though he said retirement is definitely near.

“Don’t waste your time — it goes by,” Holstein said. “Now I’m 82 years old and hiding inside away from a virus I can’t see… afraid. Life is unpredictable.”