Opinion | If capacity is limited at Kinnick, other sports provide alternatives for fans

If some fans are unable or uncomfortable being at Kinnick Stadium this fall, there are other enjoyable opportunities to enjoy Hawkeye sports in person. 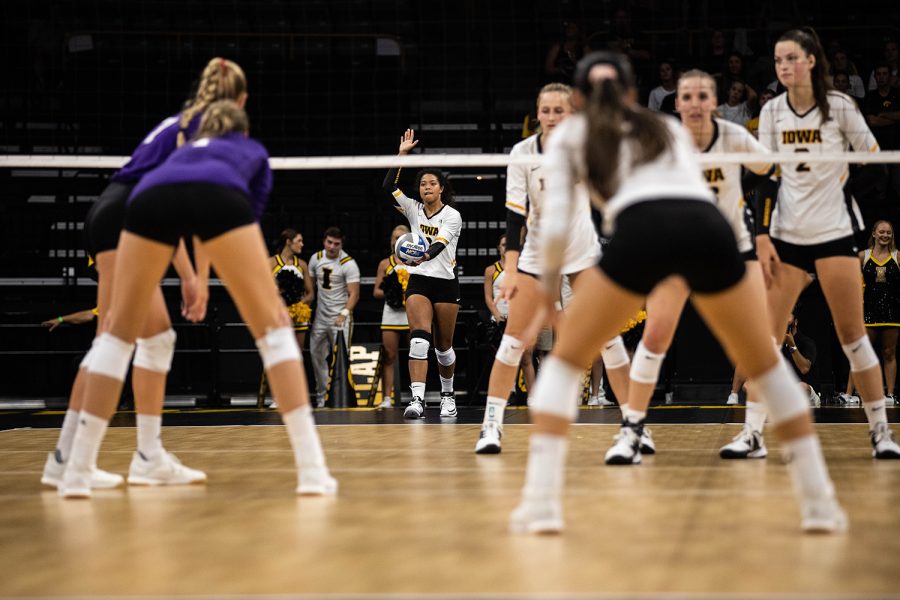 Iowa setter Brie Orr serves the ball during a volleyball match between Iowa and Washington at Carver Hawkeye Arena on Saturday, September 7, 2019. The Hawkeyes were defeated by the Huskies, 3-1.

I am not a fortune teller, but I can tell you that the fall athletic season experience for fans at Iowa will look different.

With social distancing guidelines recommended across campus when feasible, it’s safe to say they will be recommended for fans as well if there are Hawkeye sports. It is still uncertain how many fans will be allowed in Kinnick Stadium. It will probably have reduced capacity, including tailgating restrictions.

Some fans might not feel comfortable in such a large setting as Kinnick Stadium since there will still be a significant number of people attending football games. Some fans seeking to attend football games might not get in with reduced capacity.

Fortunately, football is not the only Hawkeye sport in the fall. There are several other sports that compete at the same time, including, volleyball, soccer, and field hockey.

Each is a fun sport to watch in person that will provide fans an alternative to football since there are less fans who attend these sports. Social distancing can take place more easily. Plus, for those worried about exposure time, these sports take less time to play.

But most of all, fans should expect to see good games for those sports. Though each is coming off a different type of seasons, there are strong reasons to be excited for all three. Therefore, I recommend Hawkeye fans to attend these sports this season if they don’t feel comfortable or can’t attend a football game.

Volleyball had a rough season in 2019, going 10-21 under first-year head coach Vicky Brown. However, most teams do better in the second year under a head coach, and the Iowa volleyball program should be no exception.

Junior outside hitter Courtney Buzzerio led the team last season in aces with 32. She was also second in kills and assists and fourth in digs.

RELATED: Iowa volleyball moving past NCAA violations, looking ahead to next season

More importantly, the Hawkeyes’ top setter, Brie Orr, is returning. A senior, her junior season was cut short due to injury, but she proved once again she was the master at assists. She became the seventh Hawkeye to amass 3,000 assists in their career last season.

Also, volleyball will play at the all new Xtream Arena in Coralville, which should provide an intimate atmosphere for fans to view the action.

The team’s defense is its strength, with three starters returning – sophomore Sam Cary and juniors Sara Wheaton and Riley Whitaker. With the excitement coming off the NCAA Tournament bid, expect soccer to be strong out of the gate and making another run for it.

Last but not least, field hockey is coming off two NCAA Tournament runs, including a run to the Elite Eight. Though one of their top players, midfielder and defender Katie Birch, will not be returning, there are many good players that are coming back.

Leah Zellner, a forward and junior, was recently named to the USA Field Hockey U21 National Team. Last season, she had seven goals and two assists.

These teams deserve fan support, especially during a time of worldwide crisis. Feel free to go to football games if you feel comfortable in large crowds, but if not, these sports will have smaller crowds that will provide an enjoyable atmosphere.