After more than two weeks of protesting for change in Iowa City, the Iowa Freedom Riders held a Juneteenth celebration featuring performances by local artists. 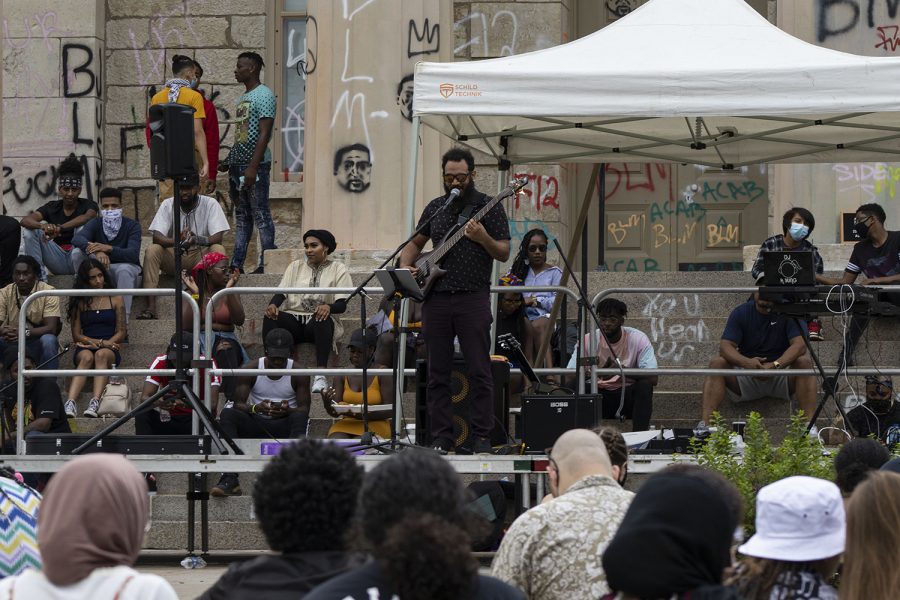 After two and a half weeks of protesting in Iowa City, hundreds gathered on the Pentacrest Saturday for a Juneteenth celebration and march organized by the Iowa Freedom Riders.

The event marked a victory lap for the Freedom Riders, who have organized protests against police brutality and racial inequality and demanded change within the city. The Freedom Riders reached an agreement with the Iowa City City Council on Tuesday, in which the city council agreed to take steps to see through the group’s demands.

Juneteenth commemorates the freedom of the last group of enslaved people in Galveston, Texas on June 19, 1865.

Sashay Carroll, 23, a native of Iowa City who lives in Waterloo, Iowa, said it was nice to see Black culture and history being celebrated.

“There has been a lack of acknowledgement of what Black people have brought into this country, and I think that it’s amazing that now we’re starting to see some acknowledgement, and there’s several changes that are taking place as well,” she said.

The afternoon began with a 40-minute march throughout downtown beginning around 2 p.m. A crowd of around 300 walked together down East Jefferson Street and back up Burlington Street while the Freedom Riders led family-friendly chants.

Related: Iowa City celebrates Juneteenth amid a pandemic and protests

Back at the Pentacrest, tents were set up serving pulled pork, hamburgers, hot dogs, and an array of sides, with funds donated by several community organizations, Johnson County Supervisor Royceann Porter said.

Porter is the president and co-founder of the Black Voices Project, which helped to organize the event. Porter said with help from community organizations, the celebration will grow in future years. Iowa City usually hosts a Juneteenth celebration in Mercer Park every year, but it was canceled in 2020 because of the coronavirus pandemic.

Porter said the death of George Floyd, a Black man who died after a Minneapolis Police officer pressed his knee into Floyd’s neck for nearly nine minutes, was a catalyst that brought attention to the problems facing the Black community and increased awareness of the holiday.

“This is the fourth of July for us. It’s 155 years in the making,” Porter said. “This is a celebration for us, and we wouldn’t have never seen this if it wasn’t for George Floyd.”

Several local artists performed on a stage set up in front of the Old Capitol, including jazz artist Blake Shaw, Bayo Ajose — who creates music under the name ADE — and Chicago-based singer and spoken-word poet Casper Alexander, who goes by the stage name Chisongwriter.

Mohamed Ibrahim, 20, a Coralville resident who has attended most of the protests over the past few weeks, said he hopes to see Iowa City Juneteenth celebrations get bigger in the coming years.

“This is the first time I remember something like this being celebrated,” he said. “And if it started like this, I think it started strong. So hopefully if just every year we keep adding more and more, it’s just going to grow to become something much better and nicer, and it’s going to be a great celebration every year.”

Brianna Smith, 19, of Tiffin, said she hadn’t learned about Juneteenth until last year. She said she thinks Black history should be taught more in schools.

“I don’t think it’s right, because people don’t learn the true, full history of being Black, and the struggles that we go through every day,” she said.