The cuts come after UI President Bruce Harreld’s announcement that the UI is projected to lose $70 million due to COVID-19, and the Iowa Legislature’s $8 million cut in state appropriations to state Board of Regents’ institutions. 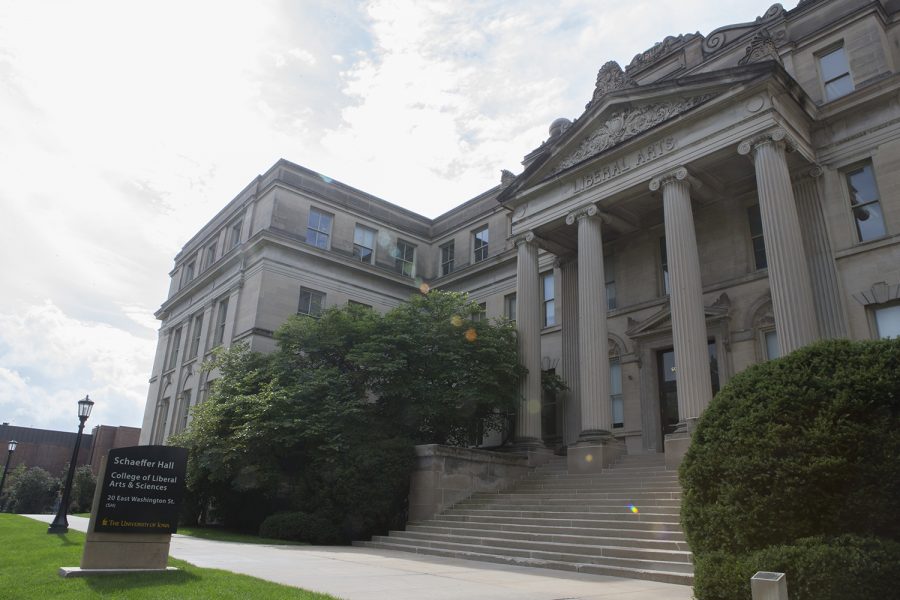 The University of Iowa’s largest college will lay off 15 instructional-track faculty as it enters the first phase of a three-tiered plan to make up to $25 million in budget cuts due to revenue loss caused by the novel-coronavirus pandemic.

The first tier identifies $15 million in cuts within the College of Liberal Arts and Sciences. The cuts follow the UI’s $70 million financial loss due to COVID-19 and an $8 million cut in state appropriations to state Board of Regents institutions by the Iowa Legislature, and an expected drop in enrollment at the UI in the fall of 2020.

President Bruce Harreld announced in a budget message to the campus community on June 8 that the university was considering permanent or temporary layoffs, hiring and salary freezes, or salary reductions as a result of COVID-19-related financial losses.

“While federal funding will help, it is far short of what is needed to make the university whole,” Harreld said in the message. “As a result, many collegiate and central service unit leaders across the university will be forced to make difficult decisions, some of which will impact employees.”

RELATED: UI may permanently lay off some employees as a result of COVID-19

In an email sent to CLAS faculty and staff on Wednesday, Dean Steve Goddard said the college expects a 13-percent enrollment decrease in non-resident students and a 5-percent decline in residential students.

In an email to The Daily Iowan, Goddard said the prediction is slightly more optimistic than the university’s predictions for fall enrollment. However, exact numbers will not be available until after the fall semester begins.

Some instructional-track faculty have already seen their contracts terminated ahead of the official July 1 date. Others have seen the typical length of their contracts reduced, and now remain uncertain of their fate once the second tier rolls around in the 2020-2021 school year, where additional cuts will depend on state appropriation decisions.

“The state appropriation cuts will be long lasting, and we may never recover the funding once the deappropriation is made,” Goddard said in the email.

Steve Duck, departmental executive officer within the Department of Rhetoric, said five instructional-track faculty members in the department were up for contract renewal, by recommendation of the college. Of those five, three contracts were not renewed.

Duck said the standard contract length at the time of renewal is three years. However, the remaining two faculty members up for contract renewal only had their contracts extended for one year — making them vulnerable to the second round of cuts. He said the cuts did not appear to be based on the value and merit of the instructor.

“It’s very difficult to see colleagues who have performed so well arbitrarily cut just because their contracts are up for their renewal,” Duck said.

Duck said that officials within the Department of Rhetoric agreed that they would have taken a pay cut to their own salaries in an effort to protect their colleagues from elimination, had they been given the chance. One lecturer, Ashley Wells, even offered to resign in favor of keeping any one of the faculty members from being let go, but Duck said both efforts did not change the UI’s decision.

“She’s resigned, she’s going to another state, and I asked the college if that would save any of the three people who have been terminated, and they basically said no it wouldn’t,” Duck said.

Elke Heckner, a lecturer in the German department who was among the 15 lecturers who were laid off, said the termination process was “the most cruel and inhumane process” she had ever experienced.

“After seven years of dedication to the core values of the university, to helping revitalize my department with exciting and urgently needed courses, I am told that my position will not be renewed with two week’s notice,” Heckner said.

Among other courses, Heckner taught “The Politics of Memory: Holocaust, Genocide, and 9/11,” one of the courses the UI offers that satisfies the “Diversity and Inclusion” general education requirement for students. The course, which was fully enrolled with 22 students, will no longer be offered due to her termination, she said.

“We are right now in a huge national crisis — issues of racial justice and diversity,” Heckner said. “Why would we, in this moment when students need ongoing conversations on these very difficult and challenging times, why, at this time of crisis, would we want to cut lines off faculty like me who have conducted these difficult conversations for years and are especially equipped to do this?”

The lecturer said she was frustrated by the lack of transparency provided by the university regarding the criteria they followed when making the decision about which faculty’s contracts to terminate, as well as the decision to delay temporary, mandatory cuts to administrative supplements for leadership, department heads, and directors until the third tier of the budget cut process.

Goddard told the DI temporary salary reductions immediately made to administrative faculty salaries would not be enough.

“Temporary salary reductions help with short-term budget reductions to fill a gap in a given fiscal year, but they do not address the long-term budget cuts we are facing,” Goddard said in an email to the DI.

While the UI Faculty Senate was not directly consulted about the recent lack of contract renewals, senate President Joseph Yockey said the organization continues to stress to the university that salary reductions, furloughs, layoffs, or hits to academic programming should not be imposed, unless other cost-saving measures are first found, beyond doubt, to be inadequate.

The Faculty Council will hold a special meeting June 25 to discuss steps for addressing budget issues for the summer and into the fall.

“I think everyone understands sacrifices will need to be made. No one will escape the budget crisis unscathed,” Yockey said in an email to the DI. “But at the same time, it is important to recognize that cuts to faculty or academic programs are rarely about trimming ‘fat;’ those cuts go straight to the university’s muscle and bone.”