Hawkeye swimmers are finding ways to stay in shape while away from team facilities. 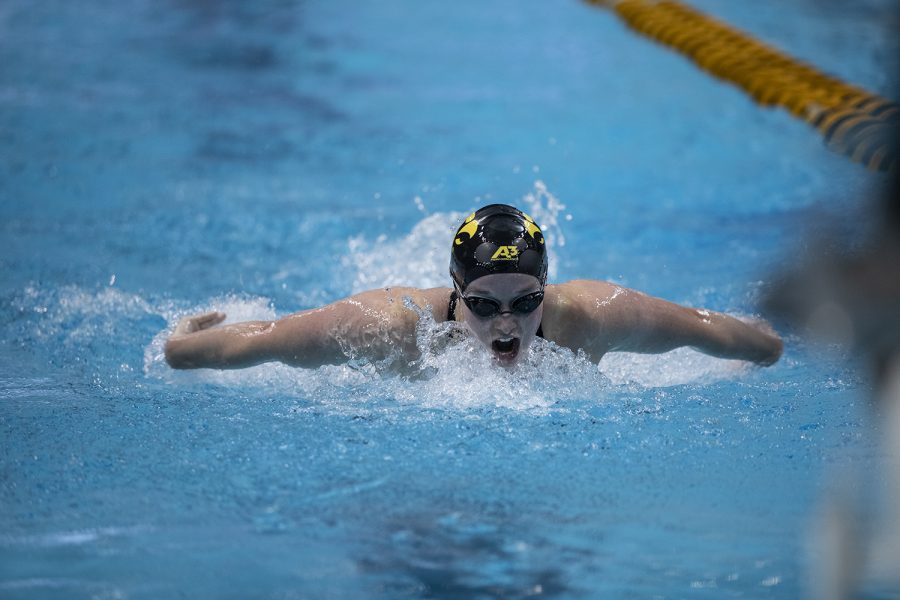 Iowa’s Kelsey Drake competes in the 200 yard butterfly during the last session of the 2020 Women’s Big Ten Swim and Dive Championship on Saturday, Feb. 22, 2020 at the Campus Recreation and Wellness Center. Ohio State won the championships with an overall score of 1503.5. Drake placed 12th overall with a time of 1:58.54.

Athletic facility closures due to the COVID-19 pandemic have affected few athletes the way they have affected swimmers and divers.

Swimming is not a sport you can often practice in your backyard like basketball, or on the road like cross country. Because they were forced to be out of the pool for long stretches of time —and since there is no set date for when the team can return to the facility — Iowa swimmers got creative with their training during their offseason.

Junior freestyler Mateusz Arndt elected to stay in Iowa City during the pandemic. After the 2020 NCAA Swimming and Diving Championships (scheduled for March 18-21) were canceled on March 12, Arndt did not have pool access at all until mid-May. Beginning then, he and senior teammate John Colin began doing workouts in Colin’s 12-by-8 foot pool, using a resistance rope to hold them in place.

Senior Kelsey Drake, a Fly/IM specialist, also chose to stay in Iowa City during the pandemic.

Facing the same issue, Drake began biking and running. As the weather and water warmed up, she and other teammates started open-water swimming. Drake said that while it is much different than swimming in a pool, it is still nice to get some swimming in.

Arndt has focused on strength training in the wake of the season cancellation. Strength and conditioning coach Ashley Renteria provided workouts that could be done with limited resources. Arndt and Colin utilized the weightlifting equipment in Colin’s garage.

Training your whole life for one goal and achieving it, only to have it be canceled days before it occurs is nothing short of heartbreaking. Drake experienced this after qualifying for her first ever NCAA championships.

“It was a very hard thing to get past, even though I know it was for the best,” Drake said. “… I am more motivated than ever to get back to NCAAs next year so I can have that experience I’ve always wanted.”

Arndt’s biggest mental struggle has been the uncertainty surrounding when he will swim competitively again. He said he is enjoying trying different types of workouts such as running and strength training and hopes to see that work pay off in the pool when the time comes.

“I am trying to not think too much about competitive swimming right now,” Arndt said. “…The best we can do is try to work around the problem instead of worrying about what we have lost [and instead] appreciate what we have.”

For both Drake and Arndt, there were life lessons to be learned from this experience.

“I’ve been swimming basically my entire life and have never had a break this long away from the sport,” Drake said. “But now I know after next year that I will be OK without it. I won’t take [swimming] as much for granted like I have the past three years.”