Due to the COVID-19 pandemic, the draft was only five rounds this year. 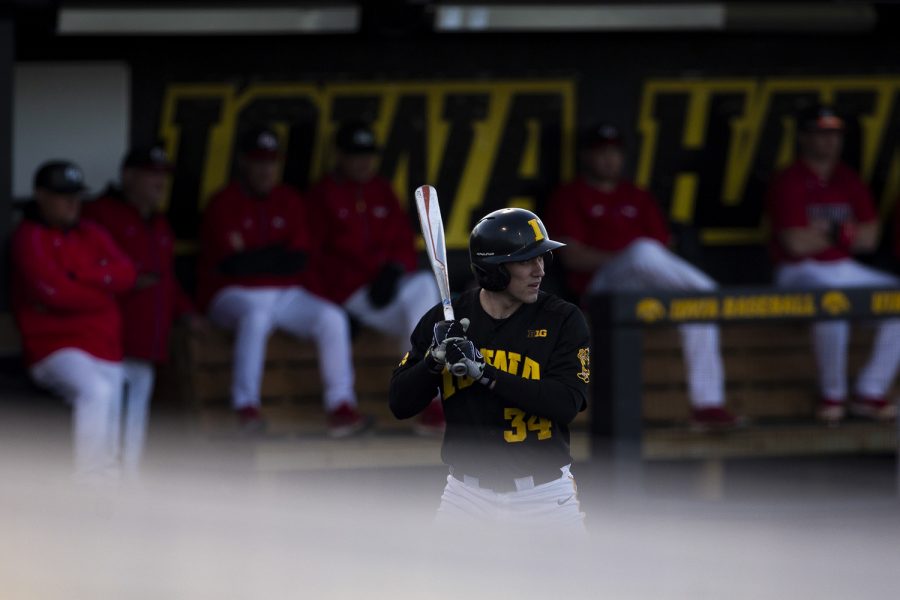 Iowa catcher Austin Martin watches the pitch during a baseball game between Iowa and Grand View at Duane Banks Field on March 3, 2020. The Hawkeyes defeated the Vikings 15-2.

After Major League Baseball announced that its 2020 draft would only be five rounds instead of the usual 40, thousands of draft hopefuls, both collegiate and high school, were left scrambling.

“From a players’ standpoint, it was obviously disappointing for the guys, both the juniors and the seniors,” head coach Rick Heller said. “We had anywhere from four to six juniors who could have potentially been drafted, and we felt that we had four seniors who had the chance to go in a normal draft as well.”

Heller said that the juniors are losing their leverage year: one where they have the option to sign professionally if they are offered enough or decide to come back to school. And although the seniors now have another year of eligibility, a lot of them have graduated and were hoping to move on to professional baseball or to begin their careers.

No Iowa baseball players were drafted in this year’s MLB Draft. Only senior pitcher Grant Judkins has signed an undrafted free agent deal with the Oakland Athletics.

Martin was planning on declaring for the draft but decided against it after the announcement of the shortened draft and the fact that he can now play another year for the Hawkeyes. In his final year at Iowa, Martin is planning on getting a master’s degree in finance.

“It seemed like the best option for me,” Martin said. “I can get my master’s while also being able to play baseball.”

For Iowa baseball, Martin made an immediate impact as catcher after spending two years playing at Southeastern Community College. In his first year as a Hawkeye in 2019, he started 53 games and hit safely in 34 of them.

This year, Martin was poised to have another great season. He started 13 games as a team captain and was named to the Big Ten Preseason Honors list. He was also put on the Buster Posey National Collegiate Catcher of the Year watch list for the second straight season.

Although the extra year of eligibility is a relief to the seniors who thought they had their last season cut short, it proves a problem for roster management. All but two seniors are coming back to play another season, including the incoming freshmen and transfer players coming on to the team.

But Heller is excited for the chance to play another season with essentially the same team.

“We felt like we had a really good team last year,” Heller said. “All of us are hopeful that with having our juniors not sign, a large part of our seniors coming back, and with a really good recruiting class we have this team could be really solid.”

Iowa baseball held a 10-5 record before the season was canceled due to the COVID-19 pandemic, including three wins over ranked opponents — No. 14 Duke, No. 18 Arizona, and No. 20 North Carolina.

Martin wants to use his final season at Iowa to improve his skills, both as a catcher and a hitter. After his final season, Martin is planning on giving the draft another shot, even if it is only five rounds again.

“I’ll give it a shot.” Martin said. “I mean, it is my last year of baseball. Granted another pandemic doesn’t happen, it’s something I would definitely want to do.”