Dillon Doyle announces he is transferring to Baylor 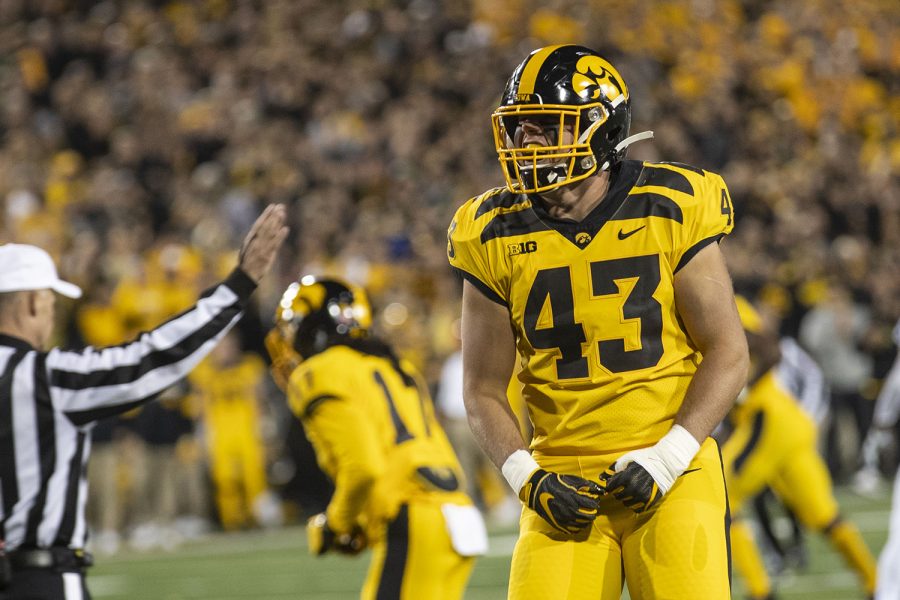 Former Iowa linebacker Dillon Doyle announced on Twitter Thursday that he is transferring to Baylor.

“I’m excited to announce my decision to attend and compete for Baylor University,” Doyle said in a statement. “I’d like to thank [Baylor head coach Dave Aranda] and [Baylor defensive coordinator Ron Roberts] for the opportunity, and I want to thank everyone that has helped ans supported me throughout my recruitment. Baylor provides a special situation to be a part of a culture with world-class people and coaches every day, and I can’t wait to get started.”

Doyle is the son of former Iowa strength and conditioning coach Chris Doyle, who reached a separation agreement with the University of Iowa on Monday after allegations by several former players that he made racist comments to them.

Doyle announced June 9 that he was entering the transfer portal, two days after his father was placed on administrative leave.

“I will tell you that we’re very, very sad to see Dillon Doyle go,” Iowa coach Kirk Ferentz said June 12. “But we fully understand and support his decision. He’s a tremendous young man.”

Doyle was entering his third year in the Hawkeye football program. He appeared in four games in 2018 as a true freshman, mostly playing on special teams. He took a redshirt for that season. Last season as a redshirt freshman, Doyle appeared in every game and recorded 23 tackles. The Iowa City native was expected to be a starter at linebacker for Iowa next season.

“I’d like to take the time to thank Iowa Football for my time in the program,” Doyle said in a statement June 9. “Growing up in Iowa City, it has always been my dream to wear the Tiger Hawk, and I have taken great pride in representing the state of Iowa for the last two seasons. The relationships I’ve formed through this program will last forever, and I’m so incredibly grateful for each of the people I’ve met during my time here. I’d like to thank my teammates and other members of the community for the overwhelming amount of support I’ve received the last few days.

“With that being said, I’m announcing that I’ll be moving on to the next step of my career and entering the transfer portal. I am excited to join a new football team and give my all to helping them on their path to a championship.”

Baylor finished the 2019 season with an 11-3 record after entering the season unranked. The team lost its final two games of the season against Oklahoma in the Big 12 Championship Game and Georgia in the Sugar Bowl.

Aranda is entering his first season as Baylor’s head coach after Matt Rhule left the school to coach the NFL’s Carolina Panthers.