Williams made an immediate impact in his first year with the Hawkeyes after a record-setting high school career. 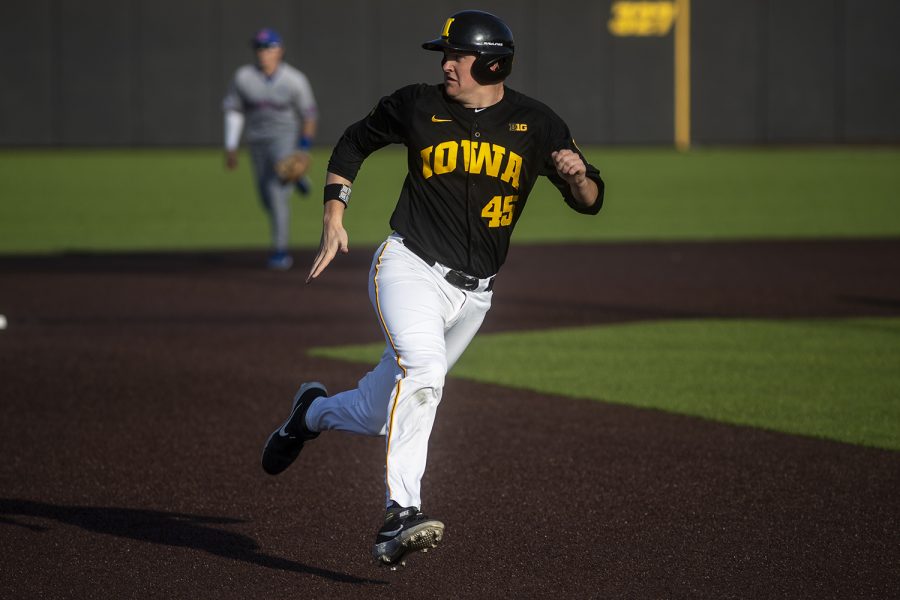 Iowa first baseman Peyton Williams watches where the ball is while racing to third base during a baseball game between the Iowa Hawkeyes and the Kansas Jayhawks on Tuesday, March 10, at Duane Banks Field. The Hawkeyes defeated the Jayhawks, 8-0. (Nichole Harris/The Daily Iowan)

A strong season for the Iowa baseball team was cut short due to the COVID-19 pandemic. First baseman Peyton Williams was one of the Hawkeyes who made the most of the shortened season.

Williams was named a Collegiate Baseball Freshman All-American in his first season in the Black and Gold.

The true freshman from Johnston, Iowa, finished the season with a .298 average, two HRs, seven extra-base hits, eight walks, and 16 RBIs⁠ — the most for a freshman in the Big Ten. Out in the field, Williams finished with a perfect fielding percentage and 10 assists.

Williams’ success as a freshman followed a tremendous high school career where he finished with a .412 career batting average, set Johnston County High School records in at-bats, hits, runs, doubles, home runs, and RBIs, and became only the sixth player in 4A history to surpass 200 career hits.

While his high school career was filled with accolades and eye-opening stats, Williams still had many adjustments to make to play at the Division I level.

“The most challenging thing about this level is that all of these pitchers and coaches know what your weaknesses are, so until you turn your weaknesses into strengths you are going to be unsuccessful,” Williams said. “After a weekend I like to write down what I was successful at and what I wasn’t successful at, and then during that week I will really try to focus on those things I wasn’t doing too well with.”

This is head coach Rick Heller’s eighth player to receive All-American honors in his six years of coaching at Iowa. Williams’ success this year did not come as a surprise to his manager.

“We have felt for a long time that Peyton could come in and be an impact player for us,” Heller said. “He’s a big, physical guy who possesses good hand-eye coordination and a good knowledge of the strike zone, especially for a young player.”

Heller said that one of the main attributes that sets Williams apart is his athleticism.

“He is very athletic for a big guy,” Heller said. “He played football and basketball in high school, so he is athletic enough where even if he gets fooled, he is able to stay in his legs and make contact.”

Fielding can be a very overlooked part of a power-hitting first baseman’s game, but Heller said that buying into playing the elite level of defense that Iowa prides itself on was one of the first things he wanted to instill upon his first baseman.

“Defense is something that makes you different at first base,” Williams said. “I don’t want to be known as some big guy that is put at first base just so he can hit, I want to be at first base because I am really good defensively and it would be better to have me there than anybody else.”

Williams had hits in all four games against ranked opponents and finished with a .385 average, five hits, four RBIs, and three walks in those matchups.

“We played against a lot of good teams, and he basically just proved to everybody that he could be a force not only on our team but in our league,” Heller said.

With the season shortened to only 15 games this year, Williams said that he wants his play next year to remove any doubt over whether or not he would have earned this award at the end of a full season.

“I feel like I have to prove something,” Williams said. “I want to get better every year, and I want to show everyone that even though it was a shortened season I can compete and have that success over the course of a full year.”