Opinion | America, we are not equal

Longstanding oppression needs to be fought tooth and nail by everyone for a more equitable future for all. 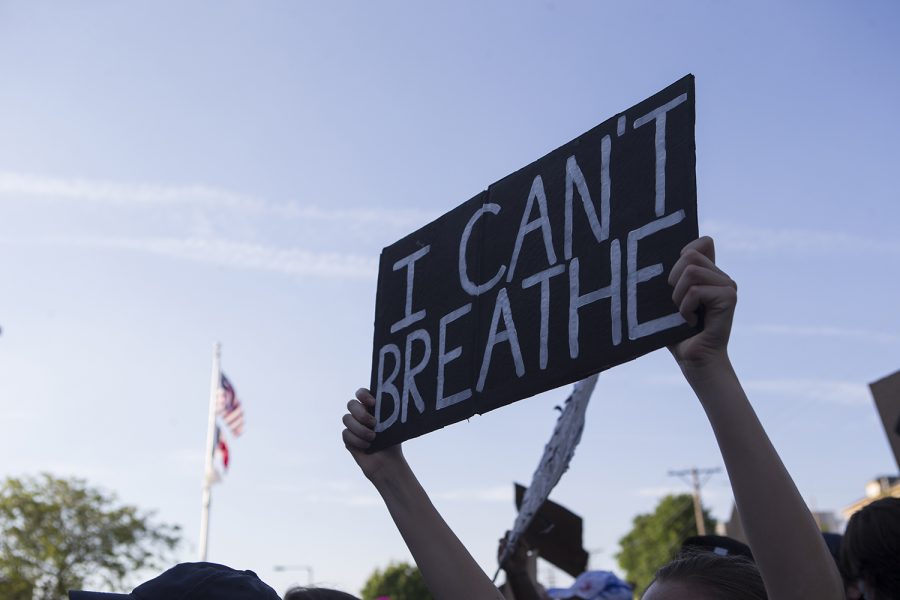 A protester holds up a sign on Wednesday, June 3, 2020 outside the Johnson County Sheriff's office. Protesters marched through Iowa City, stopping at intersections and government buildings to spray paint before continuing on.

To the citizens of Iowa City, we have to wake up. We have to open our eyes to the reality of our society. We have to recognize that right now America does not have equality, liberty, and justice for all.

For the past two weeks, I have signed petitions, attended protests, and educated myself on the world we live in today. I am fighting for the value of every human’s life, screaming for the voices of the unheard, and standing for justice and equality.

These protests are not just about George Floyd. This is a fight against the systemic racism that has existed far too long in American society. We all breathe, bleed, and sweat the same. The color of someone’s skin should not be a death sentence or a reason to devalue a life.

How many more innocent lives are going to be lost? Kenneth Chamberlain was sixty-six when police barged into his home and shot him twice. Eric Garner was forty-three when he was killed by a police officer using a banned chokehold technique. Michael Brown was unarmed and 18 years old when he was fatally shot at least six times by officer Darren Wilson.

How many more people are going to have to live in fear? Too many mothers are scared to death that their children won’t come home from work or school, and too many people fear for their lives every time they drive their car.

America was built on racism. Despite the efforts of Martin Luther King Jr. and the Civil Rights Movement, we still have not made enough progress. As the times have changed, so has the form of racism. Instead of the three-fifths compromise, we had the Jim Crow laws in the 20th century. We have reached 2020, and now we replaced Jim Crow laws with the corruption of the government, police brutality, and the unequal distribution of wealth.

This fight is against the fact that militarized police are disproportionately sent to African American communities regardless of the crime rates.

This fight is against the fact that Black people are more likely to spend more time in prison comparable to white people who commit the same crime.

This fight for every innocent life that has been lost because of the color of their skin. This fight is against the fact that peaceful protesters are getting tear gassed and shot at with rubber bullets while exercising their First Amendment rights.

Black Lives Matter is not a political issue. This is about human respect. Racism has been rooted in American soil since 1776, and it is time for it to be dug out of our system.

Everyone needs to do their part, whether it’s signing petitions, educating themselves, spreading awareness, or donating to organizations. Staying silent and submitting to the injustices and oppression that have occurred in American society for over 200 years is unacceptable. As Martin Luther King, Jr. once said, “there comes a time when silence is betrayal.”

We are living through history, and this is a revolution that will not be silent until the country that was built on racism, inequality, and injustice is rebuilt. I want to be on the right side of history, and I am part of the generation that is going to fight until there is equality and justice for all.