Teams could officially play ball again starting June 15, and following safety guidelines will be necessary for a successful summer. 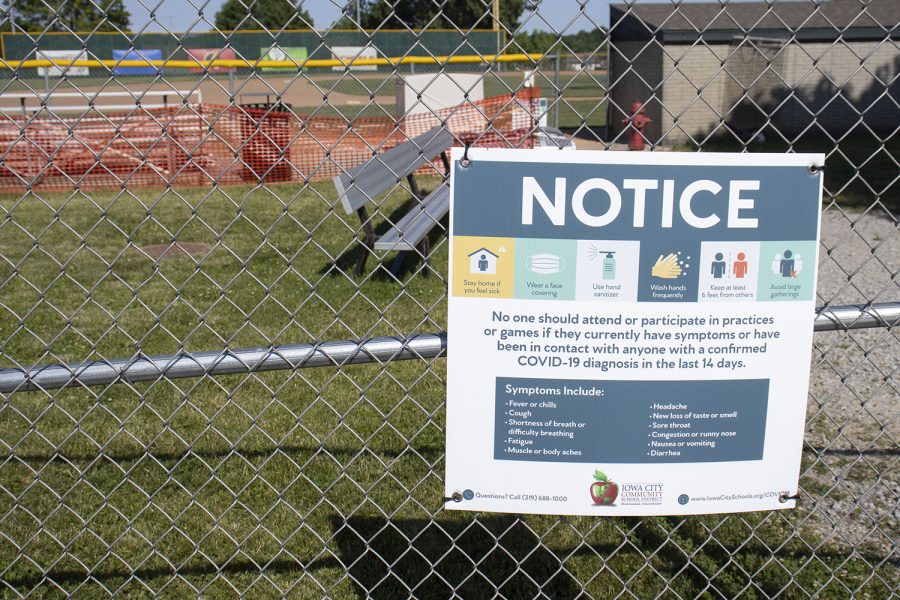 A sign for COVID-19 restrictions is posted outside the baseball field on Saturday, June 13 at West High School in Iowa City.

Several professional sports leagues across the U.S. are still in the process of returning to competition amid the COVID-19 pandemic. Iowa high school baseball and softball teams are already playing ball.

“We are truly leading the nation when it comes to having the chance to show if it’s crazy that we’re [playing],” Iowa City High head softball coach Jeff Koenig said. “Or if this is controlled, if it’s all laid out with a plan — this can be done and it can be done successfully.”

The guidelines call for players and coaches to take their temperatures before attending a game or practice. Social distancing procedures — which includes no dugout access during practices — and a variety of other mitigation techniques are also described.

“It falls upon the coaches at the end of a practice or before a practice to wipe down common areas,” Iowa City West head baseball coach Charlie Stumpff said. “Any machines, anything and everything you might be touching, it’s got to be sprayed down and wiped down a couple times a day.”

Wearing masks during games and practices is not required by the IHSAA and IGHSAU guidelines. Koenig and Stumpff both said that their teams had not been practicing with masks and did not plan to wear them during games, but would when the team was traveling or inside.

Practicing in small groups has been a strategy both Koenig and Stumpff have utilized this summer more than in the past. Koenig said that giving the athletes visual cues has been key in practicing social distancing successfully so far.

“On our outfield fences we’ve taken some time to paint the bottom parts of the posts white or red,” Koenig said. “So now they have a visual cue and know if they line up on this post with my teammate to play catch and then my next set of teammates lines up, they’re 10 feet away.”

After it was announced that high school baseball and softball seasons could take place in the state this summer, both Koenig and Stumpff said players and families reached out with concerns.

Both teams had athletes who opted to sit out this summer due to the virus. Those players will be welcomed back next season if they decide to play again.

For the players and coaches who will be out on the field this summer, responsibility will be the theme. Iowa is the only state that plays high school baseball and softball in the summer. These games will be some of the only live sports events going on around the world.

All eyes will be on Iowa.

“Every year we have responsibility, but the responsibility is bigger this year,” Koenig said. “It’s bigger from a standpoint of we always want to be great teammates and those types of things. But now we’ve also got to do social distancing and make sure we’re taking care of ourselves. And not only for our softball team and the opportunity to play and to see how far we can go. But also if we don’t do this right, we can’t do football in the fall. Their friends can’t do volleyball in the fall. They can’t maybe go back to school in the fall. They can’t do these things.

“So that’s a responsibility that we’ve got to take seriously… And I think they get it. They’ve come right into practice and they’ve socially distanced, hit the hand sanitizer half a dozen times during practice. All of those things that they’re doing, I think they realize that this is bigger than [them].”