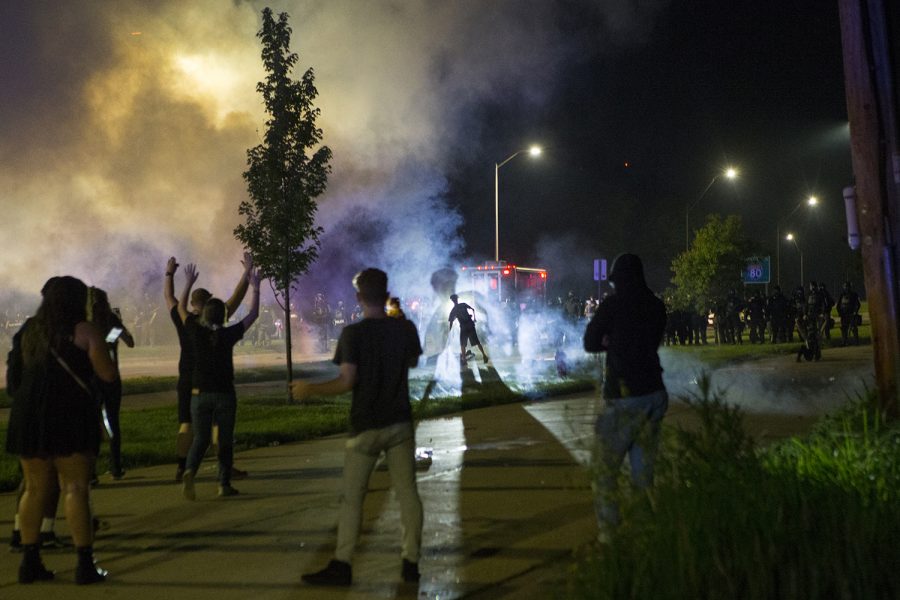 A protester puts their bicycle on the ground before sitting down in front of police officers. Officers fired tear gas on the crowd after protesters disobeyed an order not to advance. Several protesters reported that no one in the crowd made physical contact with officers before being tear gassed unexpectedly. This protestor sat on the ground amid a cloud of tear gas for several minutes.

The gas never really got to me. I never needed water or antacid poured into my eyes because of the burns. With it being a powder, it never got on my skin so that I might rub it on my face later and start the process over again. Although I did cough a little, I was not bent over hacking because it got inside my lungs and prevented my air flow.

My mother has raised me to be suspicious of the police, because of this my fight or flight reflexes kicked in too quickly. When the first bang of the tear gas went off I ran. While everyone was shocked and screaming, I grabbed my sibling and ran.

I remember hearing them screaming about people who were hurt or maybe something about our other friends being lost in the crowd, but I kept running until I was far enough away to see the cloud of sea-green gas rising into the air.

When I turned around I saw high schoolers, college students, Iowa City citizens, crying out for help. Some were writhing on the ground, some yelling names for people they were separated from. For what felt like hours I stood struggling to breathe, as I felt my heart banging against the bars of my chest begging to be let out.

That moment is when my eyes began to water. Not because I was sad but because the chemical weapon that was unleashed on the peaceful protesters had finally entered my system.

Tear gas was banned for use against foreign militaries back in 1925. Yet it is being used against peaceful protests in the war on racism just a couple weeks ago.

At that time, the protesters were just angry people, who wanted change. But after that night they became the Iowa Freedom Riders (IFR). Because that night their rights as human beings was stolen from them.

I spoke with Iowa City Mayor Bruce Teague and the leaders of IFR on Thursday, June 4th, desperately trying to prevent what happened the day before to happen again.

Teague has expressed that he is against using tear gas on protesters, but he stated that his control stops at ICPD. He told me that while he could try, he cannot guarantee the safety of protesters when facing state troopers.

Why is that even a statement? The Mayor told me that he cannot guarantee my safety from the police whose job is to protect and serve. Not because I was a career criminal, but because I stood at a police barricade and shouted “hands up, don’t shoot.”

Three years ago I stated in an article for The Daily Iowan that America was broken because Blackness is perceived as a threat in this country. Unfortunately, as I look at the state of America today, I now realize that remains true.

Today, after two weeks of protesting, the IFR continue their fight. They refuse to let the racist practices of the system stop their movement. They will not stand and be patient for bureaucracy to kill their cry for their basic human rights.

On Wednesday night, after that first barrage of tear gas, I returned to the police barricade. As did many of the protesters who are now known as IFR. Not to attack the police but to continue their peaceful protest. We were met with more gas, and flash grenades.

I was terrified when I approached these officers. I remain terrified every time since then that I have protested. Terror grips my lungs even when I put on my uniform and go to work inside of the UIPD police station.

I am not scared because I have received a wakeup call that racism still exists, but because my worst fears had been proven true. Because the stories my mother told me about the police had been confirmed. Because regardless of all the columns I wrote for the DI, the system has not changed. Black lives still do not matter to America.

Editor’s Note: Wylliam Smith is a former columnist for The Daily Iowan.