The killing of George Floyd in Minneapolis served as a catalyst that sparked protests across the nation against years of racial injustice and police brutality. In Iowa City, an organization named the Iowa Freedom Riders have emerged to lead the force for local and state-wide change. 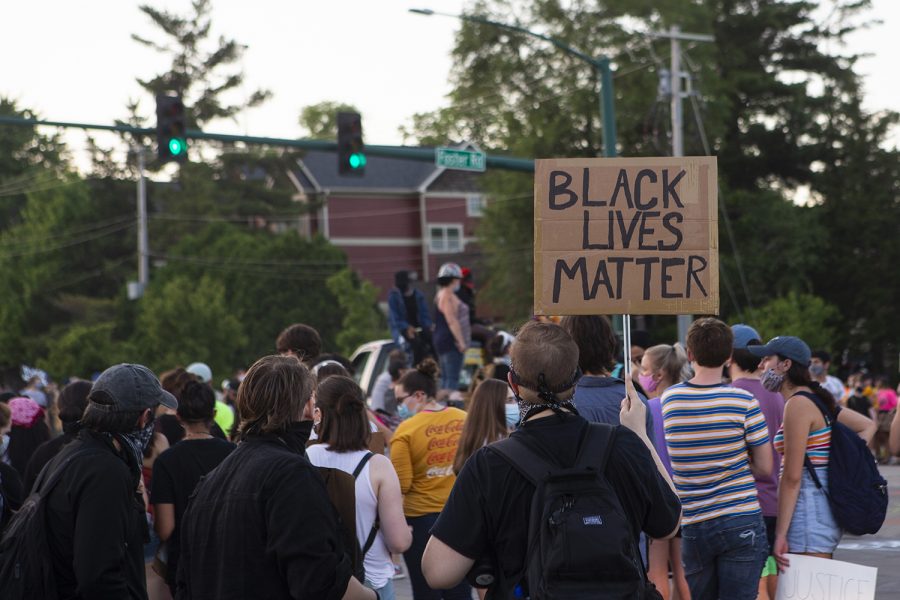 Protesters circle at the intersection of Dubuque St. and Foster Rd. on Friday, June 5, 2020 to spray paint before marching to I-80.

Protests have swept across Iowa and the nation after the killing of George Floyd, a Black man in Minneapolis. In Iowa City, a group named the Iowa Freedom Riders have led the charge for changing policies within the city and state after an officially-planned rally was held in Iowa City days after Floyd’s death. Here is what DI reporters have gathered over the past two weeks regarding protests, the city and the University of Iowa’s response to local and national events, and the movement for lasting change.
May 25
George Floyd is killed by a Minneapolis police officer
46-year-old George Floyd, a Black man, died in Minneapolis on Memorial Day. Floyd had been handcuffed and pinned to the ground by Derek Chauvin, a white police officer who knelt on Floyd’s neck for over 8 minutes. A video of the violent act was taken by bystanders and began gaining national attention on social media. Protests in Minneapolis began the next day.
May 29
Iowa City interim police chief condemns the killing of George Floyd
Iowa City Police Department’s Interim Police Chief Bill Campbell condemned Chauvin’s actions. “The death of Mr. George Floyd at the hands of a Minneapolis police officer is tragic,” Campbell wrote in a prepared statement. “Like many of you, I watched the video in disbelief, sadness, and frustration, as those who took an oath to protect us, failed to make good on that promise. The manner in which these officers treated Mr. Floyd is inconsistent with how we train police officers to conduct their interactions with the public.”
May 30
Rally held in Iowa City
Hundreds of people gathered on the Pentacrest for a planned rally to stand in solidarity with protests happening in Minneapolis and across the United States in response to the death of George Floyd. Speakers at the rally included rally organizers, Iowa City Mayor Bruce Teague, Mayor Pro-Tem Mazahir Salih, Johnson County Supervisor Royceann Porter, and North Liberty City Councilor RaQuishia Harrington.

May 31 – June 1
Flash-bangs and tear gas are used on protesters in Coralville, curfew imposed
Protests occurred in Coralville outside the Coral Ridge Mall, where protesters were met with flash-bangs and chemical irritants after one protester rushed officers. The next morning, the city of Coralville imposed a curfew and released a statement announcing looting and looting attempts had occurred the same night at several Coralville businesses. The curfew was lifted on June 9.

June 1
Protests begin in Iowa City
A group of protesters met on the Pentacrest and marched around prominent landmarks in Iowa City. The first night ended with minor property damage and no major altercations between protesters and Iowa City and Johnson County police.

June 3
Protesters heading toward I-80 are met with tear gas and flash-bangs
During the third consecutive night of protesting in Iowa City, peaceful protesters heading toward Interstate 80 were met with flash-bangs and tear gas after meeting a police line on Dubuque Street. One man suffered a seizure after the first round of flash-bangs and was taken to a hospital by an ambulance. The event sparked outrage among protesters, who immediately took to social media to express their anger with the Iowa City Police Department and Iowa State Patrol’s actions against the nonviolent demonstration. The night gained national media attention.

June 4
Mayor Bruce Teague addresses the city, protesters march to I-80 without incident
In a live-streamed address, Iowa City Mayor Bruce Teague said he didn’t approve of the use of chemical irritants on protesters by both Iowa State Patrol and Iowa City Police Department officers, but he also added law enforcement felt it was important to prevent more injuries or death as protesters moved toward I-80. Teague vowed to make changes to police and other city agencies.

Teague also announced that he and other Iowa City leaders would march with protesters that night. The crowd reached I-80 without incident a little after 10 p.m. where police had blocked off traffic and allowed the crowd onto the highway.

June 5
The Iowa Freedom Riders list demands
Protesters held a vigil for Breonna Taylor — a Black woman who was shot eight times by police — on her birthday. Protest leaders also shared a list of 13 changes they are demanding from the Iowa City City Council and other government entities, adding that the protests will not end until changes are made by the city or Gov. Kim Reynolds. On I-80 that night, the leaders told the crowd to follow the “Iowa Freedom Riders” on Instagram for protest details.

June 6
Protesters vandalize Kinnick Stadium
Following the days in which several Black Iowa Hawkeye football players, current and former, spoke out on social media about racism they’d experience within the program, several protesters spray painted the outside of Kinnick Stadium and the statue of Nile Kinnick during a protest in Iowa City on Saturday night.

June 7
Lead protester arrested
Mazin Mohamedali, a constant voice at Iowa City’s protests, was arrested on violation of probation, unlawful assembly, and disorderly conduct. Rockne Cole, Mohamedali’s attorney, said he didn’t know whether Mohamedali had been targeted because of his activism at the recent protests.
June 9
City Council discusses demands, protests temporarily halt
The Iowa City City Council held an unscheduled work session on Tuesday with an Iowa Freedom Riders spokesperson to discuss the organization’s demands for policy change within the city. The Iowa Freedom Riders announced on their social media that they would halt protests for two days to reduce distractions for the council while the council reviewed their demands, but would resume if they did not see immediate action taken.

June 11
Protests resume
After a two-day hiatus, protesting resumed with smaller numbers compared to the multiple thousand that marched onto I-80 the previous week. About 200 protesters encountered roughly 100 law enforcement officers that had set up a five-foot barricade on First Avenue near the Coralville Trader Joe’s.

June 12 – 14
Protesters march to Mayor Bruce Teague and City Councilor’s homes
In an attempt to put pressure on the city council to commit to meeting their demands, protesters marched to Mayor Bruce Teague’s house, where he met them in his driveway. Protesters told Teague that he and the council were not acting quickly enough on their demands. Teague remained mostly silent as protesters spoke, telling the group occasionally, “I hear you.”

Protesters marched to other councilors’ homes in the following nights.