Located in the South District of Iowa City, the colorful, 4,400-square foot mural was inspired by neighborhood children’s drawings, designed by a local artist, and painted by the community. 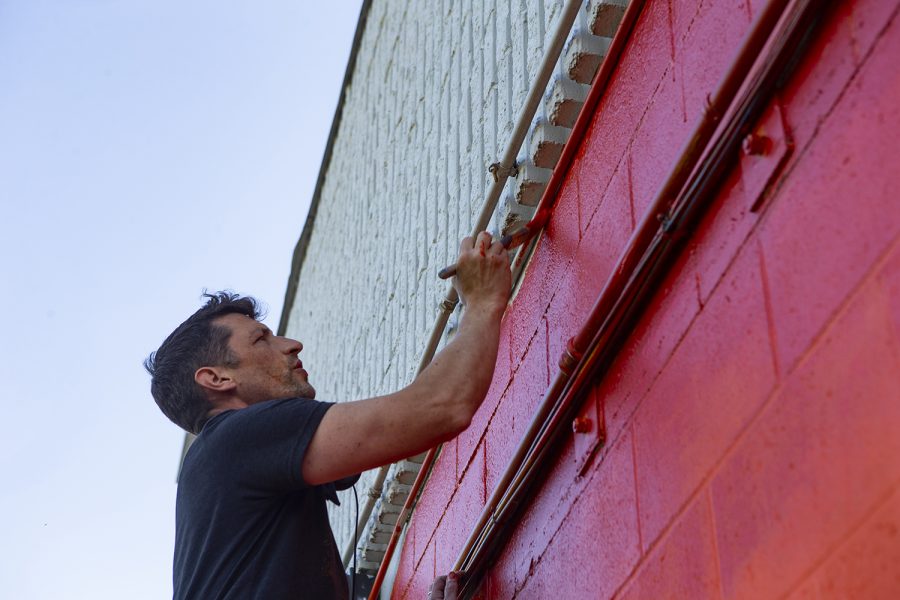 Artist Nick Meister paints a portion of a new mural on Saturday on Cross Park Ave. After several community painting days, Meister said he was excited to get his hands on the wall and do some painting himself. Although the artist debated community painting days at first, he said they ended up being a great way to bring everyone together.

In the summer of 2018, the South District Neighborhood Association hosted its first community cleanup along Broadway Street in Iowa City. During the cleanup, volunteers found a long, white wall on 1030 Cross Park Ave, hidden by shrubbery. Their discovery is now home to a 4,400 square foot mural.

Set to be completed Sunday, weather permitting, the South District Mural — whose official name has yet to be decided on — possesses a ‘colors of the rainbow’ theme, according to local artist Nick Meister. Long streaks of paint glide like water over every section of the wall, showing off the flora and fauna native to Iowa, including the state fish (catfish) and the state tree (oak).

The project was originally launched as part of the South District’s art initiative, which was developed in September 2018 to help increase neighborhood children’s access to seeing and creating art. The association decided that the artwork featured on the mural should be inspired by kids, said Angie Jordan, the events and projects coordinator for SDNA.

“It was about, ‘our kids don’t have access to art classes or art near them or just the power of art, even in an educational form,’” she said.

To capture the children’s inspiration for the mural, Meister spoke at the Faith Academy — who donated the wall to the SDNA because the beginning of the mural starts at the academy — Grant Wood Elementary, and Alexander Elementary to teach students about art education and the importance of art within communities. Afterward, the fourth, fifth, and sixth grade art teachers would have the students write down ideas and drawings for what they wanted the mural to look like.

While sifting through the drawings and musings of the children, Meister said he looked for recurring themes in their ideas and found that animals were the most desired subject.

“They all wanted to see animals,” he said with a laugh. “So there are lots of animals and sports, music, and then family, neighborhood, friends — some of the most prominent things that kept recurring… so I tried to fit in all those ideas. I never used any specific kids’ drawings, only their ideas.”

Through those ideas, Meister had them included through what he describes as a steadily flowing wave of water that represents a life force running through the whole painting. Meister believes the painting may be the largest in Iowa City.

While the wall’s wide structure was problematic at first to the artist, he later found that drain spouts neatly cut the wall into more manageable 50-foot sections. Even then, the artist had some smaller helping hands along the way.

Once Meister drew the initial outline on the wall, the South District community was invited to volunteer to help paint it. For the first three days, children and their parents helped paint the wall through a ‘paint by alphabet’ system that Meister created.

Eric Harris, an active South District resident who moved there a little under a year ago, said that while he couldn’t attend the paint days since he was at work, his children attended the event and did a ‘great job.’

“[The mural is] a one- or two-minute walk from my house, so I see it every day,” Harris said. “And it just kind of stands out. I haven’t really heard what other people think. Some people outside of this community have told me it’s a good thing… I live in this community, and I think it’s a great thing, especially coming out of a pandemic.”

While Jordan said fundraising for the project had been difficult, the team’s efforts ended up raising $15,000 for the mural.

During their community paint days, Jordan said that they didn’t promote the event too much because they wanted to respect social distancing due to COVID-19, but also wanted to involve families that were from the South District so they could have an opportunity to share the experience with one another.

“[Painting] created a shared experience that I don’t think our neighborhood has [the] opportunity to consistently have that, with families and residents of any age or background or socioeconomic status,” she said. “We’re creating these opportunities within our association to have consistent ways to get together and have shared experiences that are positive, so we can actually get to know our neighbor.”

Jordan added that the SDNA is trying to drive away the negative stigmas that have previously deemed the South District as “unsafe” by creating spaces where people can come together, do activities with one another, and check in on each other.

“People from the outside don’t get to have their opinions be fact about us anymore,” she said. “We’re talking, we’re speaking — not just with our voices but with our art, our ideas — and coming together.”