The University of Iowa will provide funds to relocate the oldest known residence in Iowa City. 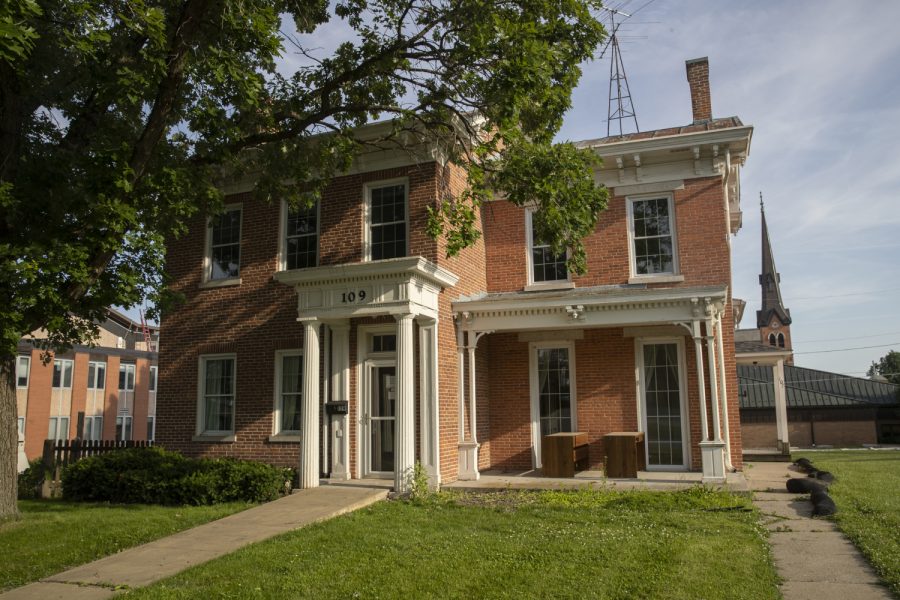 The Sanxay-Gilmore House on is seen on June 15 on Market Street in Iowa City.

Pending approval by the Iowa City City Council Tuesday night, the University of Iowa will spend about $1.23 million relocating and rehabilitating the Sanxay-Gilmore House, Iowa City’s oldest known residence, from its current location on Market Street to a nearby parking lot.

The Iowa City City Council will hold a hearing during their Tuesday meeting to approve a purchase agreement that will convey 0.2 acres between N. Dubuque and N. Clinton Streets to the UI — at no cost — to be used for relocation and rehabilitation of the Sanxay-Gilmore House.

Built before the Old Capitol and when Iowa was still a territory, the Sanxay-Gilmore House went up in 1843 and is the oldest-known residence in Iowa City, according to the Historic Preservation Commission. It was the home of one of Iowa City’s founding families, the Sanxays, in 1843, and the home of former UI president Eugene Gilmore from 1934 to 1940.

The UI will preserve the house for a minimum of 40 years. After the 40 years, the university can decide to continue preservation or let the city relocate the house again within a two-year period.

The UI will be responsible for retaining the services of engineers, structural and design professionals to develop plans for rehabilitating the new site, following interior and exterior Historic Properties guidelines, and restoring the former site. Among relocation costs, the UI will also cover all costs following the house’s move, including:

Several Iowa City residents wrote correspondence to the council in support of the relocation over the past week.

“Historic architecture broadens our perspective of what a place is and how it relates to human history in a larger context,” wrote Belinda Bates on June 11. “It fosters awareness of human achievement and individual creativity; it shows us what has gone before and inspires us to create anew.”

The UI was awarded the Emergency Historical Resources Development Program grant through the State Historical Society to determine whether the structure was in a condition to be relocated, and provided a list of 130 potential locations to the church. Gloria Dei said it would donate $50,000 to rehabilitation efforts.

However, Ginalie Swaim, chair of the Iowa City Historic Preservation Committee, had said in an 2018 article on the house that the National Park Service states historic buildings should remain where their history happened.

“[The house] is an important piece of Iowa City history,” Swaim said. “The location and orientation of the Sanxay-Gilmore House is indeed part of its story and key to its significance.”

In a June 10 letter to the city council, Swaim said preservationists would prefer that the house remain where it is, but that the location across the street would be preferable to demolishing the house.

“Yes, up to 24 parking spaces will be lost on this fifth of an acre,” she wrote. “The problem of parking may always face us. The opportunity of saving the oldest house in Iowa City is before us now — and should not be squandered.”