Following a Black Lives Matter march that gathered outside of the UIHC complex earlier this month, faculty and staff within it have shown support for the movement and the Black community. 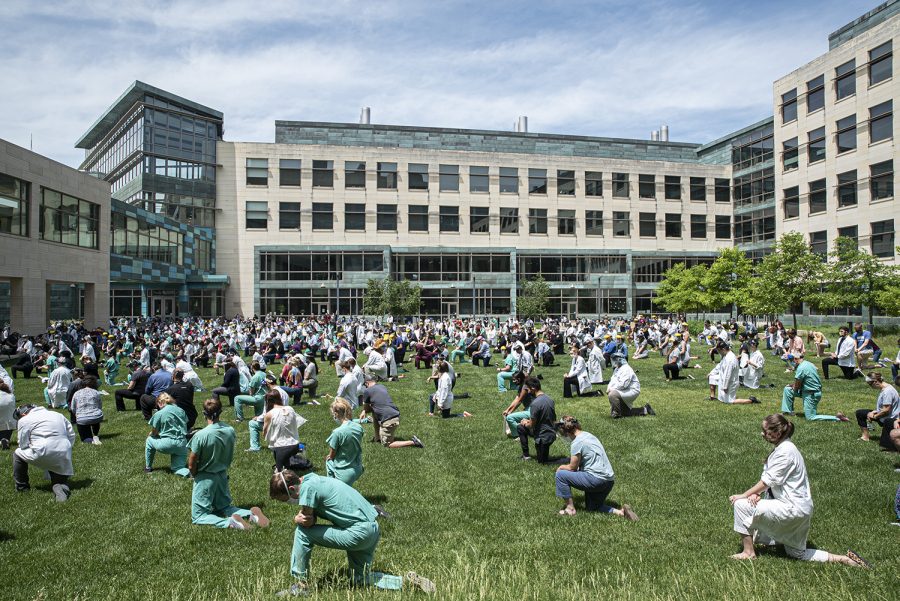 The Carver College of Medicine gathered outside the Medical Education Research Facility for White Coats for Black Lives on Friday, June 5th, 2020. The medical community silently nealt for ten minutes in honor of Breonna Taylor and to protest systemic racism.

University of Iowa Hospitals and Clinics faculty and staff are showing their support for the Black Lives Matter movement, after protesters marched directly outside the emergency department and Colloton Pavilion on June 6.

As previously reported by The Daily Iowan, the protest began at the Pentacrest and evolved into a march that made a stop at the UIHC complex. Protesters chanted, and some spray painted the sides of the hospital near its emergency room.

According to an official statement made by UIHC CEO Suresh Gunasekaran, protesters didn’t disrupt the hospital’s operations, and employees and patients were able to safely enter and leave the building.

“I was onsite at UI Hospitals & Clinics with the protestors and observed a non-violent protest,” Gunasekaran wrote in the statement. “In fact, the protesters let multiple emergency vehicles through to UIHC.”

UIHC Staff Nurse Eric Kusiak said he and some of his coworkers were initially confused and upset that the protesters targeted the hospital, especially because they view it as a progressive and equitable institution — and one that supports the Black Lives Matter movement.

Since the start of demonstrations nationwide following the murder of George Floyd, UIHC has expressed support for the Black community. The hospital released a statement via Twitter June 2, calling violence and hate crimes against Black Americans a public-health concern.

UIHC also held #WhiteCoatsForBlackLives on June 5, an event where hundreds of healthcare employees showed their support for the Black community.

Kusiak said he and his colleagues’ opinions on the protests outside UIHC changed after Gunasekaran shared a message in their favor. Gunasekaran’s positive response allowed staff to see that the protests weren’t an attack against them as individuals, Kusiak said, but one against general inequality — including within the healthcare system.

“It’s important not to dwell on the acts themselves but what they represent – an angry, frustrated society that will no longer tolerate abuse and inequality,” Gunasekaran said in a statement. “We must all seek to understand these actions on a deeper level and look within ourselves to determine what we can do individually and collectively to fix this.”

Since these events, UIHC faculty and staff say they have noticed a change in the conversation surrounding health care and the Black community.

According to a study from the Institute of Medicine, people of color are more likely to receive lower-quality health care. The study credits legal discrimination in history as a reason Black people are less likely to receive adequate care.

Kusiak said he believes it’s important to listen to the experiences of people of color and learn more about how healthcare can be better for people of color.