Wilson points to eight-team tournaments early in the season as a new format for college tennis scheduling. 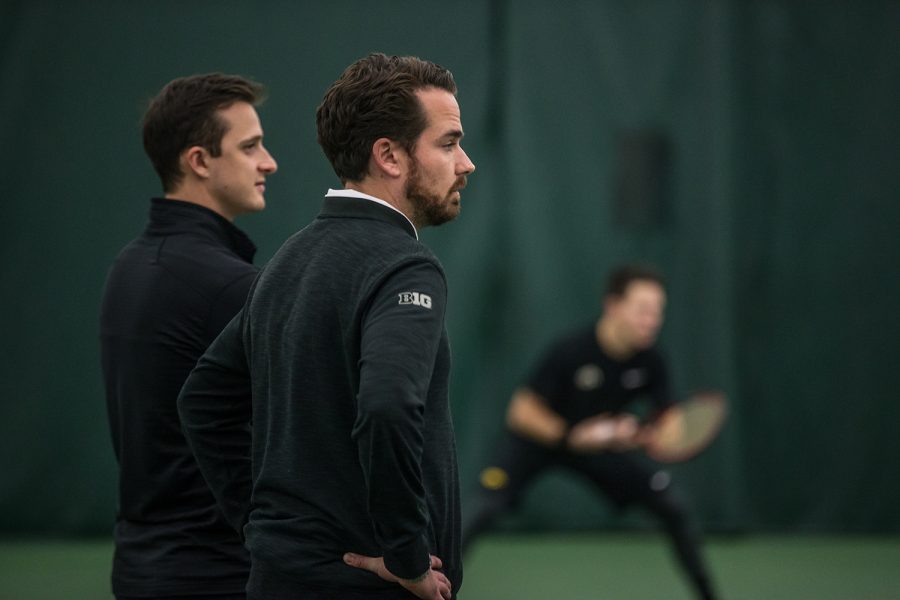 Iowa coach Ross Wilson watches his team during a men's tennis match between Iowa and Marquette on Saturday, January 19, 2019. The Hawkeyes swept the Golden Eagles, 7-0.

After a premature ending to a season where the Iowa men’s tennis team came out of the gates with one of the hottest starts in school history, head coach Ross Wilson has taken some time to reflect on his team’s success and think about ideas for the future of college tennis.

Instead of the traditional ITA kickoff in January where the top 64 teams from the previous year’s rankings are split up amongst 16 different regional sites hosted by the top 16 nationally ranked schools, Wilson said he would like to see larger tournaments played at locations across the country.

“We have had a lot of cost containment conversations for the Olympic sports, and I was looking at a model like golf’s where there are a bunch of tournaments around the country,” Wilson said. “If we could get some eight-team tournaments going where you are guaranteed three matches and it is based off ranking, then I think you would have more of the top teams playing against each other.”

Tournaments are not a unique idea in college tennis. Other events like the Blue-Gray tournament in Alabama, a tournament hosted by the University of San Diego, and a tournament in palm desert have received pretty strong draws, Wilson said.

For schools that don’t have a shot at making the NCAA tournament or their conference tournaments, this gives them a chance to compete for a trophy against schools that are high in the rankings.

“It would be cool for teams to actually get to win a tournament, take those trophies home, put it in a trophy case, and have those little extra memories besides a conference tournament or NCAA tournament that will be good for student-athletes,” Wilson said.

These competitive tournaments could be used to grow college tennis and bring more eyes to the sport, Wilson said.

“You can build these tournaments into events in the local area,” Wilson said. “You can build fan support, and on top of that tennis is trying to get on TV, so for this, you can contain costs by setting the cameras up and getting a whole tournament of matches.”

Wilson said that the coaches would likely need to come together in order to make this change possible.

“There is an advisory board that the ITA has that votes on rule changes, so I think it is definitely a conversation that needs to be started there,” Wilson said. “Tim Russell, the CEO of the ITA, asked all of the coaches if they have any ideas, and I know this is a little bit radical, but I hope they take a look at this and start the discussions on it.”

Wilson said he has also had more time to look back and reflect on the success of his team’s season and the disappointment of its early end.

“It took a couple of weeks for me to sit down and realize that this is really over, and obviously it was really disappointing for our guys who practice the whole year to play their best tennis from January to May,” said Wilson. “Obviously it was a public health issue, and this is for the greater good, so I think our guys understand that.”

Fortunately for the Hawkeyes, both of the team’s seniors, Kareem Allaf and Jason Kerst, have elected to return next season using the year of eligibility kept from this year.

The Hawkeyes finished last season with a 12-2 record overall, a 3-0 record against ranked opponents, and a win against their only conference opponent of the year. The team ended the season ranked 20th overall nationally, the highest ranking in school history.

“We’re going to have 12 guys on the team [next year] which is the most I’ve ever had, so it is going to be a lot of competition and a lot of learning for the freshman,” Wilson said. “I think this will definitely be the most competitive and strongest team we have had at Iowa.”